The internal inquiry ordered by the Tory Party into its own bullying scandal did not remain internal for very long: last week, new terms of reference were agreed and law firm Clifford, Chance LLP was tasked with taking matters forward. This, too, did not find universal favour, and it is now clear that, to all intents and purposes, this inquiry is finished. It must become truly open and independent to retain any credibility.

Why this should be can be summed up directly, and this post will do just that. 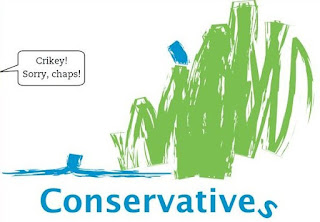 Ray And Alison Johnson Have Withdrawn Their Support: the parents of young activist Elliott Johnson, whose death set off the chain of events that led to the inquiry being set up, “said they did not trust David Cameron’s claim that the inquiry by the lawyers chosen by the Tories to investigate their son’s death was ‘independent and transparent’ … As a result the family will refuse to give evidence - and they appealed to other activists bullied by Mark Clarke to give evidence to the Johnsons’ lawyers instead”.

Ray Johnson “took particular exception to the way the law firm had asked him and his wife to give evidence to the inquiry separately – ‘as though they are trying to catch us out’ … The family wanted nothing to do with the ‘so-called independent inquiry’, he added”. Johnson was particularly scathing about the inquiry’s terms of reference, and this leads in to the second reason that the process needs to be made independent.

Anyone Other Than Mark Clarke Might Get Away With It: the terms of reference talks of “inappropriate behaviour by Mark Clarke and other members of the Party connected to him towards members and activists of the Party from 1 January 2014 to 18 November 2015”. What if they’re not connected to him? What if the bad behaviour took place before the start of last year? Why this is too narrow a remit I will explain.

A number of Tory MPs face serious allegations regarding the manner of their interaction with young party activists at Young Britons’ Foundation and/or Conservative Future events. This inquiry may well allow their actions to slip through the net. After what has already been revealed, that would not be good enough.

Not All Those Involved Are Members Of The Conservative Party: it has been stressed that organisations like the YBF are not part of the Tory Party. Some of those associated with Mark Clarke, like former Guido Fawkes gofer Harry Cole, now at the Sun, have claimed not to hold party membership. How many more of Clarke’s friends and associates are outside the party [Zelo Street does not make any accusation against Cole here]?

We need to know the full extent of YBF infiltration into the Tory Party: it was not for nothing that one of Nick Mutch's sources referred to Clarke and some of his pals as “Worse Than Militant”. Entryism is not the sole preserve of the Labour Party. Sunlight must be allowed to illuminate the YBF and its backers, alumni, supporters and hangers-on.

The Role Of Phoenix Lodge No 173 Must Be Clarified: the claim that many of those involved are Freemasons connected to Phoenix Lodge may hold no relevance to understanding what went on. But it may be highly relevant. Again, if we are to understand that role, the terms of reference must be suitably opened up.

Witness Intimidation Has Reached Unacceptable Levels: very little has so far reached the press about the way in which potential witnesses to the inquiry are being leaned on to change their stories, or withdraw them altogether. In the past week, Zelo Street understands that this practice has ramped up considerably. It looks very much as if the Tory Party does not have the means, or the ability, to adequately protect witnesses.

The Tory Party Is Leaking Information: before Elliott Johnson’s death, it had been claimed that those making complaints about Mark Clarke found he had been made aware of not only the complaint, but its detail, very soon after they made them. It has been put to me that this problem has not yet been eradicated.

Some weeks ago, Ray Johnson said that the whole exercise should be passed over to the relevant Police force - most probably a combination of the Metropolitan Police and BTP - to ensure the leaking and intimidation are stamped out, and that the whole process is free from any outside interference. He is now being proved right.

For all the reasons set out here, the Tory Party and Clifford, Chance have no alternative but to admit defeat and turn over their inquiry to a truly independent body. And those terms of reference just will not do. The current inquiry into bullying is finished.
Posted by Tim Fenton at 16:35

Do you REALLY think the loss of one life, or protecting the guilty, is going to bother them one iota?

Not on their Bullingdon gang watch it won't.

We had best make sure they DO NOT get an easy ride.

Your comment is spot on. It is of concern.

It is horrific to see them do so much without accountability.
Something needs to happen to remove the cancer that has infested politics for so long.

It is strangling the nation.

What can we do for the best?

I'm not sure handing it over to BTP will help, the Conservative Party seemed to know what was in Elliot's final letter before the Coroner did. Are they psychic or did some copy it to them?