Tory Bullying - Blaney In The Dock

While the press continues to pick apart the bullying scandal that is now in danger of distracting the Tory Party from its duty of forming the Government and running the country, one detail has come to light that suggests one of those who has so shamelessly lined up to throw former organiser Mark Clarke under the bus is rather more involved in what happened to young activist Elliott Johnson than he has so far admitted. 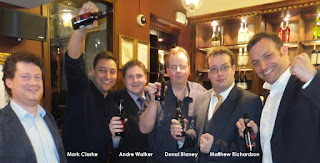 Donal Blaney at the centre of things, along with Mark Clarke and André Walker

Donal Blaney, founder of the Young Britons’ Foundation (YBF), so many of whose alumni have featured in the bullying scandal, and who also chairs the board of Conservative Way Forward (CWF), has already passed severely adverse comment on Clarke. But he has been tied in, by the recording Elliott Johnson secretly made of a meeting with Clarke, to Johnson’s being made redundant by CWF.

This has been detailed by Tom Pride (see his post on the whole sorry business HERE), who observed “the fact Elliott lost his job after complaining about Clarke is not all that surprising if it’s known that not long before Elliott was sacked Clarke had visited the Chairman of CWF Donal Blaney to warn him that Elliott was a ‘risk’ to the organisation … Clarke admitted this himself in a secret recording Elliott made”.

Just who actually runs CWF? Its board consists of Blaney, his pal Paul Osborn, and Paul Abbott, another who claimed after the event that he had warned everyone about Mark Clarke, only to have had no problem being in his presence. Do we take it that CWF is being run as some kind of personal fiefdom by the man who called his creation, the YBF, a “Conservative Madrasa” which radicalised young activists?

So many times when examining those in and around the bullying scandal, the name of the YBF comes up. Clarke was, it has been alleged, mentored by Blaney. Grant Shapps, who has now resigned as a minister, was there at its last annual gathering. So was Clarke’s preferred choice to lead Conservative Future (CF), Alexandra Paterson. And so, in the group photo at the end, was Elliott Johnson.

The influence wielded upon the Tory Party by Donal Blaney and his pals appears to be considerable. Yet until now he has remained free of scrutiny. That has to stop, and any trace of infiltration or entryism exposed and eradicated, should it be found. If CWF, an important and significant group, is being run out of Blaney’s legal practice, that by itself should have already set alarm bells ringing.

Donal Blaney has to be quizzed by the inquiry into the bullying scandal. And at length.
Posted by Tim Fenton at 12:13

The most important people in this horror are Elliot Johnson's parents and their search for the truth.

Having lost their son, they now have to put up with the sick posturing and lying of the Bullingdon gang and the assorted Hooray Henries and Hooray Henriettas who tag along.

Let's hope they don't have to wait a quarter of a century for the truth to emerge, unlike the parents of the victims of the Hillsborough Disaster.

There is, always has been, and always will be something really sick and inhuman at the core of the tories. They have a built in need to hate. There is no other explanation for the policies they pursue.

Tragically, this episode is merely symptomatic. There will be others. It's inevitable.

It does look increasingly like there has been an attempt to take over key parts of the Tory party by a smallish group of neolibertarians, under the guise of YBF and, once they had captured it, Conservative Way Forward.

I'd also suggest you look at the Freedom Association, as the same names crop up there too and they are unashamedly right-libertarian.

How many of the 2010 and 2015 Tory intake have risen through the ranks of the YBF and are therefore allied to, or potentially beholden to the YBF leadership? Which junior ministers are allied? How many cabinet members are implicated?

Bearing in mind the potential for this scandal to unravel the Government and prevent Osborne from gaining power, it's even more vital that Labour get their act together. Sadly, Corbyn has to go.

Nonsense. Corbyn doesn't "have to go."

What has to go is the gutless opposition on all sides of Parliament to the neocons who have poisoned this country, divided it, robbed it, and ultimately brought the Union to disintegration.

If Corbyn survives the lies, betrayal and propaganda there might, just might, be a chance to show how much of a deluded pantomime the far right have conducted.

Corbyn has to go because, regardless of his convictions and principles, Labour needs a leader in Parliament.

Whatever else he might be, Corbyn is not a leader.

Check out "Triumph of the Will" for "leaders."

What matters is conscience and decency, not subjucation to "leadership."

We don't need "fuhrers" or "duces" or "supreme leaders."

Given the language and examples you provide, I'm not convinced you're that interested in finding consensus.

Our current parliamentary system, warts and all, operates on the basis that parties have leaders. In order for Labour to be an effective opposition, to challenge what the Tories are doing - and there can be no more urgent time than now to provide effective challenge, it needs leadership. Corbyn is not exercising leadership. Look at what happened yesterday in the Syria vote and the divisions created as a result of it and the time leading up to it.

Corbyn's approach is creating a fractured Labour parliamentary party, which is increasingly useless at challenging this Government. Is that really what we want?

The kind of "leadership" you quote existed under Blair, Brown, Kinnock, Foot and Callaghan. None of it worked. Blair and Brown actually made it much, much worse because they hid behind what was left of the moral prestige of the Labour Party. Then they went to war on the basis of outright lies and helped mass murder hundreds of thousands of innocents and brought us to the present horror.

Yesterday's free vote flushed out a similar mentality on the far right of the party. So it served a historic purpose. Party members now have no excuse for not knowing who they are and act accordingly. That is an effective challenge done openly and democratically.

The parliamentary Labour Party IS useless at challenging the present government because (as yesterday so clearly demonstrated) TOO MANY OF THEM ARE PART OF THE SAME MINDSET. If you wish to cast yourself in with them that is your own free choice. I hope you can live with yourself when the inevitable results arrive.

Corbyn can't change that overnight, but he can make a start......and has. That is how a genuine consensus is built. And it is that more than anything the tories and New Labour are shit scared of.

So much for your definition of "consensus." Not worth a carrot actually.

You're getting a bit shouty now, are you unconvinced of your own arguments?

Nah. Just unconvinced of yours or that you want to be heard.

Or that you're member of the Labour Party. Probably just another plant.