The Sun’s non-bullying political editor Tom Newton Dunn is in combative form in today’s paper, as the headline proclaims “As court rules Met officers acted illegally in Plebgate probe … We share this victory with brave source”. The supporting articles are unequivocal: “METROPOLITAN Police detectives acted illegally by seizing a Sun journalist’s phone records in a bid to expose a confidential source, a court has ruled”. There was more. 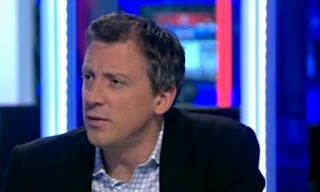 That's right Tom, you LOST three out of your four challenges

“In a landmark legal ruling, the Investigatory Powers Tribunal today found reporter Craig Woodhouse’s phone bills should not have been demanded during the investigation to find out who leaked the Plebgate row … It also ruled that the force violated the human rights of two other Sun journalists - Anthony France and Tom Newton Dunn - as well as The Sun Newspaper by using anti-terror laws to seize their mobile and landline bills too”.

Readers are told “They … seized GPRS location data that allowed our previous movements to be carefully tracked … In other words, they had free rein to pore over secret conversations we had with highly confidential sources, as well as where we may have met them, on all manner of sensitive and embarrassing stories, not just Plebgate”. Newton Dunn talks of “the Met’s own phone hacking”. And that is where he sells the pass.

The applications by the Met under the Regulation of Investigatory Powers Act (RIPA) were for phone records, not actual calls or voice messages. The ones who hacked phones, and on an industrial scale, were Newton Dunn’s fellow Murdoch hacks at the now-defunct Screws. And that was definitely illegal - as several of them went to jail. 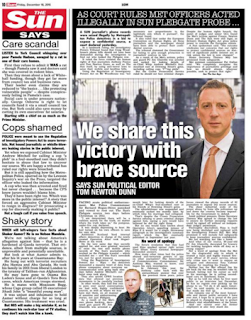 It gets worse: the Sun, the paper that has spent years slagging off the Human Rights Act (HRA), scored its only unequivocal victory in this case by citing … the same HRA it had so stridently campaigned to abolish. You really couldn’t make it up.

And worst of all, the judgment handed down in this case does not support the Sun’s headlines. For starters, there were four Authorisations made under RIPA. So while paragraph 128 of the judgment tells “The Third Authorisation was not, under s 22 of RIPA, necessary nor proportionate to the legitimate aim which it pursued. There was thus an infringement of the Convention rights of the Fourth Complainant [Woodhouse], in that the interference with Article 10 rights was not in accordance with the law”, that is not all.

Paragraph 130 of the judgment states “Applying s 6 of the HRA we decide that the Respondent [Met Police] did not act unlawfully in making the First, Second and Fourth Authorisations under s 22 of RIPA”. The other three Authorisations were not illegal.

And here is paragraph 131: “The Metropolitan Police cannot be criticised for its decision to use the power granted under s 22 of RIPA in aid of the investigation into a serious criminal offence affecting public confidence in the police. The discovery of serious misconduct by a number of police officers in the DPG shows that it was entirely right to pursue the Operation Alice investigation very thoroughly. We have held that the use of the s 22 power in this investigation was indeed both necessary and proportionate in respect of three out of the four authorisations challenged”.

So that’s a 25% success rate for the Sun, and it then had to rely on the Human Rights Act, which its brave and principled hacks want to scrap. What you will not read in the Sun.
Posted by Tim Fenton at 09:57

Another one for the dictionary of Tabloidese:

Landmark legal ruling: we got off.

'Cos he is a bully boys, mad bully boys
Bully Dunn boys aren't funny
For they all go spare when broached in their lair
And Tom Dunn's not feeling so Sunny

Take your point about a paper that campaigns against the HRA using that act as a defence but the police action was totally disproportionate considering the triviality of the original investigation. That legislation which allows the loss of all of our privacy was intended to tackle terrorism and VERY SERIOUS crime not spying on journalists. Dont let your hatred of all things Murdoch obscure the dangers of a police force abusing knowing everything about us, where we go, who we converse with. etc

He was on The Media Show last Wednesday supposedly debating with Prof. Natalie Fenton re Leveson 2. What we got was a lying and bullying misogynist.
According to his logic, all the criminal acts and corruption were in the past. So as they said about Hillsborough, we all now should ‘move on.’
If you can bear to listen: http://www.bbc.co.uk/programmes/b06rz91v

So what's noo down there in Corruption City?

Thought he would be too busy changing Cole's nappy and feeding him Cowe and Gate mashed up baby fruit in The Ivy with Paul Staines to even notice any of this.

Terrorism exists in many forms.

Then there are those that draw even more attention to themselves when naming themselves after one.

As for police spying on journalists. Call it illegal. There is nothing stopping them from getting a court order legitimately now.

I know what they are up against.

And I'm paying the price for saying so.
There is a certain amount of satisfaction in doing what is right and fair.

There are still those who have yet to learn.