Politicians’ psyches are seared through with memories of past failure. For Tony Blair and Gordon Brown, it was the long period in the wilderness and the loss in 1992; for David Cameron and George Osborne it was how the win in 1992 went sour so quickly. Both Labour and Tory memories of that year’s General Election have one common thread: the benefit of having the Murdoch press on side, and especially the Sun. 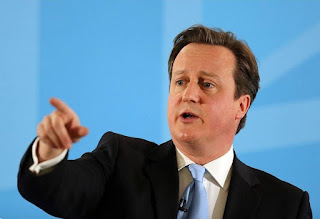 You press cheppies over thyah! Pipe dine and let the kindly people from the Sun ask the questions! Jolly good sheow!

The influence of the tabloid press may be steadily dwindling, but papers like the Sun are still able to set the news agenda, dragging other papers and the broadcasters along in its wake. Cameron and Osborne live with the constant fear of re-living what happened to John Major: losing the Sun, and the endless ridicule that ensued. Their tendency to over-compensate is what drives them into the waiting arms of Rupert Murdoch.

Their return to Murdoch’s side was sealed earlier this week when Cameron attended Murdoch’s suitably select soirée at the latter’s London flat. Here, he was reunited with the twinkle-toed yet domestically combative Rebekah Brooks, although no lending of Police horses was though to have been discussed. What was undoubtedly discussed, though, was the manner of Cameron’s prostration before Murdoch.

Cameron wanted the fear of losing the Sun to be gone from his shoulders: in this search, Rupe would help him find reassurance and contentment. But there is, with Murdoch, the inevitable Quid Pro Quo, which would invariably feature a lot of quids. The hated BBC had to be further emasculated. Leveson 2 had to be punted convincingly and finally into the long grass. Ofcom might go easier on a “Fox-ified” Sky News operation.

That Cameron had given his solemn undertaking to the victims of press misbehaviour counted for nothing: in any competition between honour and survival, honour is quickly dispatched out the window. All he will probably get is the Murdoch press backing his stance on an EU Referendum - to stay in the Union - while Rupe will also get the green light to take the 61% of Sky he does not already own.

Dave’s grovelling ministers went to the party too: John Whittingdale had the wagons circled round him in his hour of need. Priti Patel, newly promoted to Minister For Herself, did just that. The parade of prostration was as desperate as it was sickening. And all to try to ensure that John Major’s infamous phone call does not happen again.

That call was the one Major made to the unsavoury Kelvin MacKenzie, to ask how Kel would cover Black Wednesday, the ERM fiasco. Kelvin McFilth (for it was he) told Major “Prime Minister, I have on my desk in front of me a very large bucket of shit which I am just about to pour all over you”. Dave would rather keep smelling of roses.

So when Cameron comes back from Brussels to tell voters that he won’t let the UK be governed by a bunch of foreigners, remember that, at the same time, he’s whispering out of the corner of his mouth “Well, maybe just one foreigner, Rupert”.
Posted by Tim Fenton at 09:42

The putrid stench of corruption that emanates from Cameron and his cronies is nauseating. We become more like a banana republic every day.

Given his record of stewardship of Murdoch Mafia UK branch, and having only Miss Becky to assist, he probably didn't see, hear or understand what was going on or who was at the party. That (im)plausible deniability thing again.

Do we know if the new member for IPSO was present to mediate in any misunderstandings?

Surprising that no-0ne has yet made explicit the link between this event and the recent bad publicity regarding the YBF etc.

I wonder if there will be many more page 1 stories in the Scum about Tory bullying...?

Well, the UN ambassador for a banana republic was Tory key figure not so long ago. Probably gave Georgeo advice on how to combat tax avoidance. Or not!

We are not even a banana republic - we are governed from abroad.

This is just wrong on so many levels.
Should be made illegal for such friendships.

Cameron should know that be is not allowed to deal in legal matters. Only drugs.

If the Bullingdon head boy does stop Leveson 2 (or emasculate its terms of reference) and/or give the wrinkled old prune of a Nazi the remainder of Sky.......then not even the most tattooed, nose ringed, racist cockney or Lahndan suburban gimp could deny the sheer hypocrisy and cowardice.

But don't think the tories and New Labour can't get worse. They can and will. They'd sell their own mothers to make more profit. The more a rat is driven into a corner the more likely it is to stand up on its back legs.

My guess is that the New Year will see the lowest level of British media even Murdoch's lickspittles can grovel to. The rest of mainstream media won't be far behind.

All of which is why the British establishment is loathed by anybody with any measurable principles.