Later this week, the annual gathering of the Young Britons’ Foundation will take place in Cambridge. Potential attendees are told “Each year’s conference improves on the last and in 2014 we had our largest number of attendees and our biggest and best line-up of speakers yet at the leading conference for young conservatives of its kind in the United Kingdom”. But little else about last year’s conference is revealed. 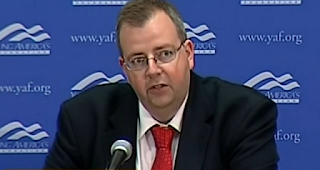 Why that should be has much to do with the bullying scandal engulfing the Tory Party, and the decision by those at the top of the YBF to throw Mark Clarke under the bus. Clarke, who was named by activist Elliott Johnson in a note left before he apparently took his own life, may have had his name erased from the YBF’s list of alumni, and its list of award winners, but he was a significant part of last year’s conference.

We can see this from the group photograph which had been used as a background for the YBF’s Twitter feed until it was pulled recently (the YBF website uses group photos from previous conferences now). Front and centre are YBF head man Donal Blaney, (then) Tory Party co-chairman Grant “Spiv” Shapps, and, yes, Mark Clarke. Also clearly visible over to the left are Alexandra Paterson, and Elliott Johnson.

And Clarke spoke at that conference, as Sarah-Jane Sewell recalled recently. Zelo Street regulars will recall that Ms Sewell had been National Deputy Chairman (Membership) of Tory youth wing Conservative Future, before being forced out via a smear campaign. Her departure was celebrated in a gathering at the Two Chairmen pub in central London, organised by … Mark Clarke. But he didn’t leave it there.

As Ms Sewell has told, “Last year, a man just about old enough to be my dad stood up on stage at YBF conference in December and defamed me, calling me a coward, useless and a disgrace to the party. He also said that I would never have a job, or career in politics”. That was not all: after learning that Ms Sewell had been given a job at the Parliament Street, Clarke confronted its head man Patrick Sullivan in a Chelsea bar. 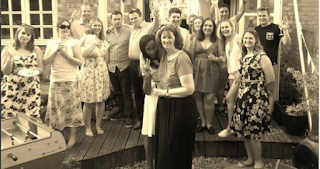 Clarke’s rant was along all too familiar lines: “Your career is over. Everybody in the room will cut you out. You’re dead to me. I know people in the party [my emphasis]. You’re never going to get ahead”. There was Mark Clarke being feted by the YBF after defaming Ms Sewell openly, and not long before he tried to bully Patrick Sullivan into dispensing with her services. And it gets worse for Donal Blaney.

Despite the claims that he had dissociated himself from Clarke, he was, according to Clarke’s henchman André Walker, at a family barbecue at Clarke’s Chelsea home as recently as July this year. All those efforts to erase Mark Clarke from the YBF’s records, and remove any incriminating photos, have come to nothing. The YBF had no problem with Clarke until after Elliott Johnson’s death.

Something all those impressionable young delegates heading to Cambridge next weekend would do well to bear in mind. The whitewash hasn’t worked, Donal.
Posted by Tim Fenton at 10:46

Almost unbelievable. Except the tories have previous on this kind of muck. It runs in their DNA.....see the Bullingdon gang policies.

What about the links between Iain Dale (YBF Advisory Board) and his interview with Donal Blaney.