The right-leaning part of the Fourth Estate is always quick to accuse those who want to see truly independent press regulation of wanting to “muzzle”, “shackle”, “chill”, or more straightforwardly censor the press. Campaigning group Hacked Off is routinely described as “anti-press”, and the Sun’s non-bullying political editor Tom Newton Dunn called them “a group of whining film stars” (you can’t have a “group” with just one, Tom). 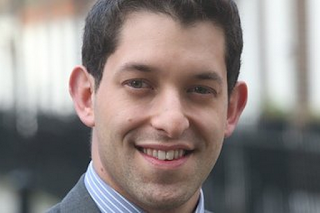 He's sorry, he hasn't a clue

Faithful - and routinely dishonest - Murdoch retainer Trevor Kavanagh talked of “gagging”, which suggests someone has been forced to read too many of his piss-poor hatchet jobs. Both were unswerving advocates of a free press - well, the kind that is free to do the bidding of Creepy Uncle Rupe and other billionaire owners - and so would never be party to anyone telling them what they should publish - even if they get it wrong. 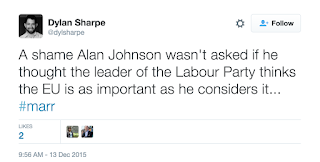 That, after all, is what is known as The Duke Of Wellington’s Principle: “Publish and be damned”, and of course neither Hacked Off, nor any of their supporters, advocate any change in that principle, unlike the Sun’s exceptionally clueless PR spinner Dylan Sharpe, who has today taken a break from telling Andrew Marr how to conduct interviews, to try and make his Twitter followers “look over there” away from yet another Sun foul-up.

This is the PR who mused “A shame Alan Johnson wasn't asked if he thought the leader of the Labour Party thinks the EU is as important as he considers it [Alan Johnson is not a member of the shadow cabinet] … Hey media plurality campaigners: how does this graph look to you…? [Look over there at the broadcasters] and the magnificently strange “Would Corbyn destory the Death Star if it meant killing 1000s of innocents onboard..? [What?]”

Then came yesterday’s admission that September’s Sun story on Jeremy Corbyn, the Privy Council, and Short Money was a pack of lies from start to finish, a PR’s nightmare. So when the Independent jumped the gun and mistakenly said the Sun would be apologising (not true) and had been forced to publish a front page correction (also not true), Sharpe was able to deflect - until he overreached himself.

“The Independent have today published a tiny correction on page 2 for a story that appeared big on page 1 yesterday” he whined, managing not to mention that the correction took the Indy one day, and the Sun’s took three months, with the paper being forced to make the admission.Then Sharpe let it slip: “Honestly, there should be some kind of press regulator who can stop this sort of thing happening”. 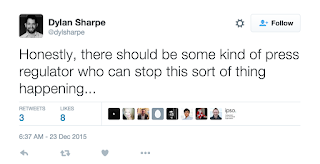 There is no way of stopping “this sort of thing happening”. Newspapers and websites are run by human beings, and human beings make mistakes. The only way to “stop this sort of thing happening” is by prior restraint, or, putting it in plain English, censorship. So Dylan Sharpe, PR for the Sun, bastion of our free and fearless press, is saying there should be a press regulator able to censor newspapers.

After remarks like that, it will be interesting to see how Dylan Sharpe’s future at the Sun pans out. If he has one.
Posted by Tim Fenton at 15:09

Seems to have grown facial hair. Guilt by association too?

I don't mind it when "...human beings make mistakes."

However, when a gang of disgusting far right propagandists deliberately set out to destroy communities and individuals (and in some cases succeed) through lies and corruption......I don't class that as "mistakes."

All of Murdoch's employees stink the place out with their malevolence and insane hubris. As time wears on they get more and more desperate as circulation figures erode as surely as a glacier.

They are terrorists.
They do it in full view of the law in the name of reporting the news.

Just like rotten politicians and corrupt officials in trusted positions they should be struck off.

The Murdoch sky buy out would be good for 2 reasons if we think about it:

1) It saves whoever owns the part Murdoch doesn't.

2) If SKY falls, it will be Murdoch owned and so what!

Dull and Sharp? The man's an oxymoron!

As Anonymous said, when the Sun posts things that are untrue, it is almost always with deliberate and malevolent intention.
Often they are careful to couch their traducement in such a way that no complaint is possible under IPSO's all too feeble regulations.
Should they be remiss in that regard, and a complaint made, they will then use their financial clout and the highly paid lawyers it can afford to drag matters out until the claimant is forced to abandon their attempts at redress.
Should even that fail them, a postage sized correction somewhere in middle pages (and perhaps a bonus article on how the complaint was all about the payout) is the best the individual maligned can hope for...