The ability of the Sun’s alleged “Westminster Correspondent”, the Most Worshipful Master Harry Cole (fully paid-up member of the Funny Handshake Brigade and trouser-leg roller-up supreme), to spin the Tory Party’s bullying scandal for the benefit of his pals has brought forth another steaming pile of bovine by-product this morning as readers are told “Tatler Tory Mark Clarke was used as David Cameron's axe man”. 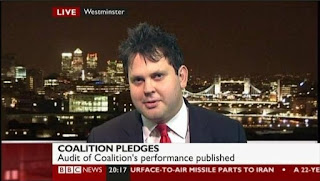 Once again, as with Andrew Feldman, the idea is to drag in the most senior members of the party, even though there is zero evidence that they had anything to do with the behaviour of Clarke - and his pals, whose number included Cole. Yes, Cole and Clarke go back some years - not that he’s telling his readers. Nor is he telling them that he was also a close friend of Paul Abbott, who features in today’s story.

So what’s the deal? “Shamed “Tatler Tory” Mark Clarke was used as a “hatchet man” in a Downing Street plot to block the rise of a young Conservative who had embarrassed the Prime Minister, The Sun can reveal … Leaked emails show the sacked official at the centre of a bullying scandal was tasked in August 2014 to end budding activist Liam Walker’s party career because of his controversial outburst on Foodbanks”.

This claim is total bullshit ...

The “leaked emails” presented to Sun readers show no such thing. There is no mention of Clarke at any point. As to the comment “PM is very much aware of him”, of course Cameron was “very much aware of him” - Liam Walker was chairman of Conservative Future (CF) in Witney, the PM’s own constituency. Nor do the emails show anyone being ordered, or tasked if you will, to take any particular course of action.

It gets worse: if the email thread is read from the top, it is clear that the exchange was instigated by Paul Abbott, not anyone in 10 Downing Street. Moreover, the exchange happens at the same time as Alexandra Paterson was being lined up as the next national Chairman of CF, supported by Mark Clarke. This appears to be Abbott and Clarke using others to legitimise keeping Walker away from running against her. 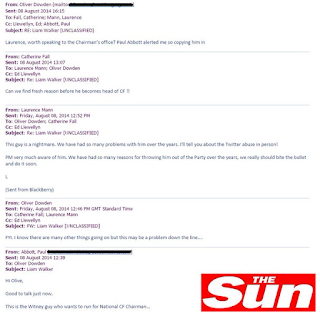 ... and this email thread proves it

There is almost certainly no connection - other than in Cole’s mind - to the PM. But what there is, is more evidence that Cole is being fed information by his pals with the intention of doing a little damage. Consider where he got that email thread. Are we expected to believe any of those in 10 Downing Street gave it to him? Most likely is that it came from either Paul Abbott, or Mark Clarke. And so another Cole “exclusive” unravels.

Zelo Street readers will recall those original signed letters addressed to Mark Clarke that somehow made their way to the Sun, despite Cole claiming to have fallen out with Clarke in July last year, a claim we now know to be untrue. As with claims of a “dossier” being sent to Andrew Feldman in 2010, the sole reason for this story is to try and take down someone at the top of the party, while the real culprits were located elsewhere.

Harry Cole’s lame and ineffectual spin will get him and his paper nowhere. But it will further tarnish the reputation of editor Tony Gallagher, who is being had for a mug. Again.
Posted by Tim Fenton at 10:37

It wouldn't surprise me in the least if Murdoch's real target here is Cameron.

After all, it WAS Cameron who instituted the new (ongoing) Hillsborough proceedings and the Leveson Inquiry. These are the only occasions he's done his job as prime minister in a (nominal) democracy. That would be enough to trigger hatred in the sour old wrinkled prune of an Oz/Yank, and thence orders to his boot lickers in Lahndan (Cole, Kavanagh etc.). The scared barrow boy-girl spivs at The Sun will do anything to keep their lousy jobs.

It might even be that the Bullingdon head boy eventually realised what was happening and decided to jump before he was pushed. Hence the early announcement he wouldn't stand again. Lyndon Johnson did pretty much the same thing when he decided he wasn't going to take the blame for the Vietnam War.

A plague on all their Nastzi houses.

Oh looks like the aggressive sweaty lump has torn himself away from arranging vile stuff to happen to women. Going up in the world. How's his Mephedrone spiker pal?

He's got a proper baby face.
He should borrow Gweedo Fawkes nappy.