Natalie Rowe And The Independent

There appears to be one of those little local difficulties brewing at a location not unadjacent to Amol Rajan, editor of the Independent. The exact nature of the difficulty is not yet clear, but that we will find out about it certainly is, thanks to the tireless advocacy of her cause by the highly sound Natalie Rowe, who has already caused some embarrassment to the Government by pointing out George Osborne’s friendship with Charlie. 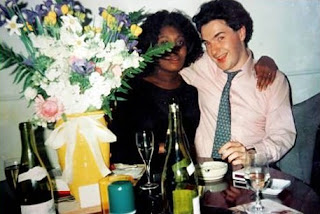 As has been well documented, the Chancellor of the Exchequer, who even nowadays is prone to occasionally looking a little out of it during PMQs, made use of Ms Rowe’s services in his younger days, although most of the right-leaning press has been rather less keen to publicise this than, say, the angle of Jeremy Corbyn’s bowed head during the remembrance commemoration at the Cenotaph last month. 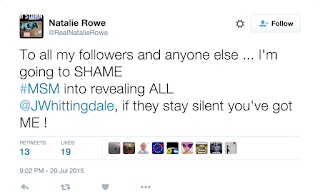 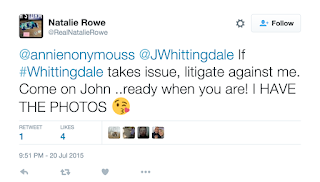 The first hint Ms Rowe’s story came in July, as she Tweeted “To all my followers and anyone else ... I'm going to SHAME #MSM into revealing ALL @JWhittingdale, if they stay silent you've got ME!” Something to do with John Whittingdale? The bloke holding the future of the BBC in his hands? It would seem so: “Come on John ..ready when you are! I HAVE THE PHOTOS”. What can Whitto have been up to? 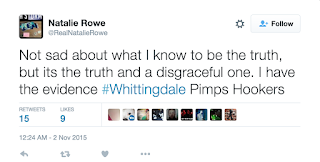 By November, we got another hint from Ms Rowe: “Not sad about what I know to be the truth, but it’s the truth and a disgraceful one. I have the evidence #Whittingdale Pimps Hookers”. But no rush from the press to dish the dirt on the minister who was in the process of emasculating the hated BBC. Still, coincidences, eh? Then, earlier this month, we learnt of Rajan’s involvement. “@amolrajan HI THERE ! HAVING A NICE DAY?” 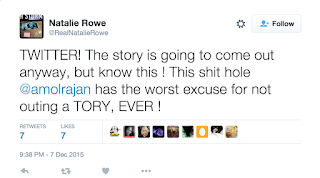 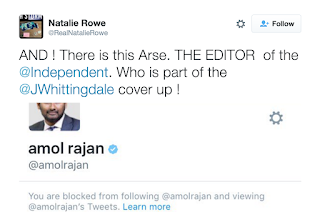 Ms Rowe was not a happy pundit: “TWITTER! The story is going to come out anyway, but know this ! This shit hole @amolrajan has the worst excuse for not outing a TORY, EVER!” Do go on. “AND! There is this Arse. THE EDITOR  of the @Independent. Who is part of the @JWhittingdale cover up!” Amol Rajan had, by this time, blocked Ms Rowe on Twitter. What was all that about? Little by little, more teasers emerged. 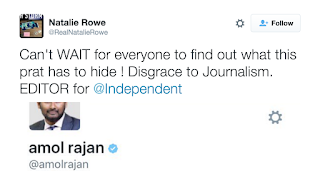 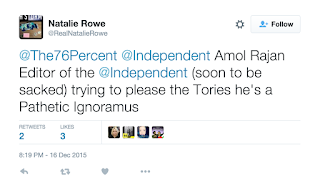 And boy, was Natalie unhappy: “Can't WAIT for everyone to find out what this prat has to hide ! Disgrace to Journalism … Amol Rajan Editor of the @Independent (soon to be sacked) trying to please the Tories he's a  Pathetic Ignoramus … Soon folks this Email from-Editor of @Independent namely  #Amol will become more clear. #BBC #Whittingdale #Coverup”. The email confirms that Rajan has spiked an article. 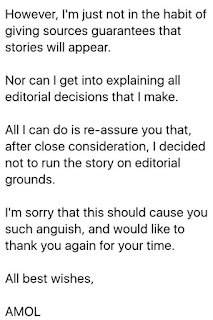 Here’s the text: “I’m just not in the habit of giving sources guarantees that stories will appear … Nor can I get into explaining all editorial decisions that I make … All I can do is reassure you that, after close consideration, I decided not to run the story on editorial grounds”. So there was a story, and if Natalie Rowe’s Twitter timeline is any guide, it concerns John Whittingdale, and she clearly believes its spiking was, er, unexplained.

What has jolly, affable Whitto been up to? Why has the Independent put an article together, only to then spike it? Did Rajan spike it on his own initiative, or was he leaned on? The problem for the Indy’s editor is that these spiked stories, if they are of any interest, have a habit of getting out. And from what Ms Rowe has been saying in the last few days, get out they will - and soon. Together with the reason for the spiking.
Posted by Tim Fenton at 15:00

"What has jolly, affable Whitto been up to?"

Surely Motormouth Louise, with her intelligence connections, and their joint performance on THAT select committee that let the Murdochs off the hook, could inform us what her erstwhile mate Whitters has been up to?

Big scoop for The Sun awaits after all those dud ones? Should we hold the phone until they deliver?

Excellent work! And thanks for the picture.Zelo Street readers (and pigeon fanciers) may also be interested in this, on You Tube https://www.youtube.com/watch?v=mfWbAOTysh8

"I'm sorry that this should cause you such anguish"
Translation:
I'm an professionl editor, should you know it, with you'r subjunctive mood you are spooling yourselv.

@rob
"Big scoop for The Sun awaits after all those dud ones? Should we hold the phone until they deliver?"

I'm afraid The Sun is the last place to look for a story on the behaviour of a man who is attempting to emasculate the BBC.

What! Murdoch's hacks don't want to protect part of our national heritage?

Don't worry I'm not holding my phone, breathe or anything else whilst Murdoch has control over any of our media let alone the hold he has over our willing, or otherwise, Government.

This lady msy have damaged her credibility when she associated with certain ilk.

If none of the press or TV follow up on this Whittingdale scandal, you know that Britain is gone, and we're now living somewhere else.