In preparation for today's debate on sending the RAF to drop significant amounts of high explosive on mainly civilian areas of Syria that just happen to be controlled by ISIS, our brave and principled Prime Minister has shown his true colours by petulantly branding his Labour opposite number a "terrorist sympathiser", a comment that has attracted much adverse comment. But some have endorsed Cameron's sentiments wholeheartedly. 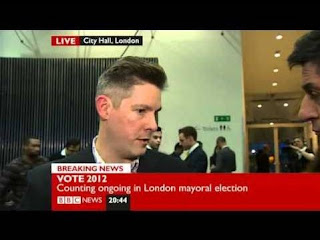 One pundit has given his unequivocal backing, despite claiming to be a member of the same party whose leader is under attack. Yes, the Telegraph's not at all celebrated blues artiste Whinging Dan Hodges has told anyone caring to listen "Why the outrage at PM terrorist sympathiser line [question mark missing again]. Corbyn and McDonnell have openly expressed sympathy with IRA and Hamas. Matter of record". And to which I call bullshit.

Talking to Irish republicans does not equal sympathy for terrorist acts, and nor does talking to those who may be connected to radical Palestinian factions. It equals no more than a willingness for discussion. If Hodges can show that Jeremy Corbyn or John McDonnell expressed sympathy for any terrorist act, it would serve Hodges' cause rather better if he were to cite that, rather than cheerlead for Cameron's desperate and ill-judged remark.

In the meantime, perhaps Dave's allegedly favourite pundit would care to examine his own record on sympathy for terrorists. He is, after all, an unswerving supporter of all that Tony Blair stood for - including talking to some groups who were, at the time, categorised, if only by the press, as terrorists. Like Irish republicans. Had he not done so, of course, the Peace Process in Northern Ireland might not have been moved forward. But they were still classed as terrorists.

Likewise the well-publicised meetings Blair had with the then Libyan leader Muammar Gaddafi, whose regime was widely regarded as a state sponsor of terrorism. Where was Hodges' vehement opposition to those talks? There appears to have been none. So that makes Dan Hodges a "terrorist sympathiser" twice over. It is, after all, a matter of record. And now he has decided to sympathise with another, and particularly indiscriminate, form of terrorism.

By giving his total and unswerving support to Cameron, Hodges is sympathising with the PM's desire to visit aerial terrorism on those mainly civilian populations where the bombs and missiles will fall. He is a full and willing participant in cheering on a process that will kill and maim the innocent, but which has no end-game in sight, and whose participants have no idea how to deal with ISIS, other than to indulge in macho posturing and acts of bloodlust.

And Dan Hodges does his cheering on, safe in the knowledge that backing a Tory Prime Minister against the party of which he is a member is not at all disloyal, as backing the Tories in the last London Mayoral election was allegedly not. Disloyalty is only done by Ken Livingstone; Hodges isn't like that at all.

There is of course, a more straightforward explanation, and that this is yet another demonstration of intellectual bankruptcy from a floor-crossing fool who has rightly garnered the nickname "The Kelvin MacKenzie of Belsize Park".
Posted by Tim Fenton at 09:06

We would really like you all to know
Regardless of the media show
That we haven't got a bloody clue
Of what we really ought to do
So let us repeat again
It's all beyond Red Ken
Support Dave Cam's BullyDon Club Band!

Lead from the back we will!

As I write, we are a way into the "debate" on intensifying mass murder of innocents in Syria - weaseled as "avoiding civilian casualties" and the old saw "Of course there always mistakes in wars" by the Bullingdon head boy and his assorted sycophants on both sides of the House.

I have never felt more ashamed of this country, that we have produced such a gang of tenth rate warmongers with the collective sensitivity and intellect of a rabid moth. That we have allowed this disgusting collection of unprincipled charlatans to get anywhere near control of our affairs is to our eternal shame.

That rabble is once again upto its sorry armpits in innocent blood. History will never forgive them. Nor will the victimised people of the Middle East.

The House of Commons has come to the same surrender as the US Congress. We are on the verge of outright fascism, at present the only difference being an absence of military marionettes with outstretched right arms and dangling ceremonial daggers.

What a terrible, needless tragedy in the face of dreadful lessons from history. Worse, it is not yet finished. There is going to be even more horror. AND WE ALL KNOW IT.

Shame on the Labour traitors. Shame on their lack of humanity. They do it NOT IN MY NAME, NOT EVER.

Listening to Radio 4 dramatisations of Zola I was struck by the irony of Glenda Jackson emoting "My God ! What have I given birth to?"

For all its ills, London is one of the most powerful financial centres in the world. We could use that finacial strength to help cut off the supply of funding to IS. That would be far more effective than dropping bombs on innocent civilians hoping to get a handful of terrorists. The real leaders will never be in harms way.
Although a financial strategy may result in collateral damage to all those vested interests that help fund the politicians bent on war.

London isn't "powerful." It's THE designated money laundering corrupt node for organised international capitalism, that's all. It's a vile place steeped in criminality.

ISIS finance comes from the feudal Gulf States who hate the remaining secularity of the north Arabian peninsula. It is they who are joined with the CIA and MI6 and others who want rid of Assad for different reasons. It is the proxy Gulf States who finance and arm the ISIS loonies. Wahabbi fanatics are the real enemies.

Meanwhile, the Bullingdon head boy has wheeled out the hissing lizard Philip Hammond to defend his "terrorist sympathisers" lying garbage. Whenever THAT apparatchik gets wheeled out you know they're getting desperate and dirty.

London? A venue for death mongers, spivs and arms dealers. The very pits of English society.

My point being that we have something more powerful than bombs in our control and we are not even considering it. The question is why - your second sentence points to the answer.

I served in the Royal Navy Submarine Service for twenty-five years and then in the Diplomatic Service for sixteen years, a total of forty-one years in the service of my country. I oppose the bombing of Syria so in Cameron's and Whingeing Dan's eyes I am a terrorist sympathiser. Would either like to face me in person and repeat that slur? I think not!

Bob - while I hesitate to come across all conspiracy-theorist, my guess is that the reason Dave won't use London's financial power to "degrade" ISIS is that there's no money to be made in it. As things stand, Dave's mates trade in arms and oil with the House of Saud. The House of Saud sponsors, or at least tacitly permits the support of hard-line Islamist sects such as al-Qaeda (remember them?) and ISIS. ISIS also sell oil and looted artifacts on the black market, through Turkey and other states unwilling or unable to prevent the trade. Someone makes money out of that trade, and they probably went to school with David Cameron.

Furthermore, one of Dave's reasons for stepping up bombing is that France and the US want Brimstone, a British missile system they apparently don't have access to in their own armouries. Aside from the fact that the bloated US military ought to have its own toys to play with, perhaps what this bombing campaign really is is an advert for whichever company makes Brimstone, who will then no doubt get all sorts of orders from countries who might want a missile with such a Biblical name...

I wasn't as integrated into the machine as Daniel Foote was (I joined the Territorial Army for something to do on the weekends, and ended up in Basra for six months).

But I still don't see the point in voting for bombing because it's merely a typical piece of Cameron fig leaf politics - pretend to be doing something useful when in reality doing something inconsequential (at best).

If you want to defeat IS, then you have to do it with soldiers. IS are now so embedded among civilian populations that "precision bombing" is going to be counter-productive.

If Dave really wants to do something constructive about ridding the world of IS then he needs to man up and send in soldiers and be prepared to welcome the coffins at Brize Norton. And if he isn't prepared to do that then the next best thing to do is let others take his place.

Rivo, We all know to our cost of the military-industrial complex. Eisenhower warned against it in 1960. Since then it has actually taken over and tried to destroy democracy across the world.

But the military-industrial complex in this country is actually one company with subsidiaries - BAe Systems, which is partly owned by, guess who, the USA.