“David Cameron’s seven-day NHS is shameless political game-playing” asserted Kailash Chand last March in a Guardian Comment Is Free piece, going on to say “He made a similar promise at the last election in 2010”.  That was not the half of it: Young Dave has pulled this particular stunt not once, but three times before this month’s General Election. Thus the “heir to Blair” has taken on board one of Tone’s bad habits. 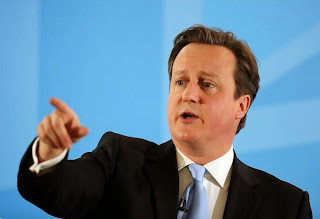 That habit was the multiple announcement of Government programmes. A thousand new train carriages? Was that the previous thousand, a totally new thousand, or part of a previous thousand with a few more added on? How many miles of new roads? Did that mean totally new, rather than widenings and by-passes? Had they included the previous Government’s new roads, or just some of them?

So when Channel 4 News told that “David Cameron pledged at his party's spring conference that a second-term Conservative government would ensure patients across England would have full access to hospital services seven days a week by the end of the parliament in 2020”, a significant number of bullshit detectors sounded, beginning with those who had read the Tories’ 2010 manifesto.

This is what that document said on seven day access to the NHS: “People want an NHS that is easy to access at any time of day or night. We will commission a 24/7 urgent care service in every area of England, including GP out of hours services, and ensure that every patient can access a GP in their area between 8am and 8pm, seven days a week”. Accident and Emergency services, of course, are already available 24/7.

Fast forward to the Tories’ 2013 conference: “David Cameron says he wants to offer more patients the chance to visit a GP in the evening or at weekends. Under a scheme to be piloted in nine areas of England, surgeries will be able to bid for funding to open from 8am to 8pm seven days a week”. And, er, “The Labour government encouraged practices to open later in the evening and on weekends”. But there wasn’t sufficient demand.

You never hear the Tories mention that, do you? Ah well, on to last year’s Tory conference, and there was Young Dave once again: “David Cameron promises seven-day GP access by 2020 … Everyone in England will have access to GP services seven days a week by 2020, Prime Minister David Cameron has promised”. Do go on.

“People need to be able to see their GP at a time that suits them and their family. That's why we will ensure everyone can see a GP seven days a week by 2020. We will also support thousands more GP practices to stay open longer” said Dave. Jolly good sheow! Except it was a repeat, Labour had tried to promote the idea, and in many cases it wasn’t worth the expense. So the Tories airbrush Labour out of the picture, and promote this as their idea, not just this year, but last. And the one before that. And 2010.

Anyone might think Dave is just another slick PR practitioner. Er, hang on a minute …
Posted by Tim Fenton at 17:27

Listening to a BBC phone in yesterday (which I eventually had to turn off before I smashed the radio), it seems a like a significant proportion of the right leaning section of the population think that a 7 -day NHS has got nothing to do with money and is simply because NHS workers are lazy and don't want to work at weekends. Honestly - I heard it with my own ears.

And as the more enlightened have commented the surgery is a lot more than a doctor. Its not just the GP.

Then if the GP has an urgent case you need:
Ambulance
Patient transport
Then all the hospital services

To work 7 days a week means a 40% increase in hours to be worked! Thats billions on top of the billions already promised. It will never happen and it doesn't need to,

The "death at weekend" stats are also questionable.

Not just questionable. The "Weekend Deaths" thing is shameless flim-flam, that arises from the simple fact that weekend procedures are all emergency procedures. Routine, low risk stuff gets done in the week.