An inexplicable and ultimately disturbing article has fetched up in today’s Mail On Sunday, but which can easily be explained as yet another clumsy attack on those campaigning for properly independent press self-regulation. “I've been an old fool, says Anne Diamond's ex. 12 weeks of marriage cost me my home, £100k... and my Jack Russell” reads the headline, above an article which does not concern … well, Anne Diamond, actually. 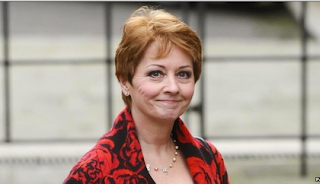 There’s more: “A savage divorce settlement has left Mike Hollingsworth, 53, homeless … He met 20-year-old student Kimberley in a production of Dr Faustus … They married after Mike had a brain haemorrhage and prostate cancer … He wanted to make sure someone would look after his children … But just 12 weeks into the marriage Kimberley demanded a divorce … Mike and TV presenter Anne Diamond divorced in 1999”.

Following the sub-headings, there are ten photos, eight of which feature Anne Diamond. But she is still not the subject of the article: that honour belongs to Kimberley Stewart-Mole, who inflicted the divorce settlement on Hollingsworth that the MoS deems to have been “savage”. And even the detail of his relationship with Ms Stewart-Mole has been selectively twisted to fit the storyline.

Hollingsworth is not 53, but 69. The MoS concedes that “To be fair, the unlikely couple were actually together for some ten years”, and those readers who manage to stick with the story find out that “She started out asking for half of everything I owned, but that got reduced” and “he admits that deputy district judge Sarah Gibbons was ‘absolutely fair’ in his case”. But the placement of the photos gives the game away.

And, in a way, she is: what the MoS is not telling its readers, although it is telling Anne Diamond, is that the article has been put together ostensibly as an account of Hollingsworth’s divorce, but in reality has been used as a vehicle to kick someone who has incurred the displeasure of those who rule over the cheaper end of the Fourth Estate. Because Anne Diamond has passed adverse comment upon the behaviour of the press.

Moreover, she has been a persistent and vocal critic of their methods. She testified before the Leveson Inquiry (it was the Murdoch press, in the shape of the Sun, that intruded on her child’s funeral). She is a signatory of the Hacked Off “Leveson Declaration”. And so it is that Anne Diamond has had her name ritually trashed once more in the MoS today, just to show that there’s nothing like putting the boot in pour encourager les autres.

Nothing encapsulates the vindictive boot-boy mentality of the tabloids to better effect.
Posted by Tim Fenton at 16:58

Another seemingly sympathetic article about a woman. "Strictly's tearful Kristina Rihanoff: Why IS the finger always pointed at the woman?" Until you notice that the phrase "Siberian Siren" was used three times.

What I liked about the Leveson Inquiry was that, when Kelvin Mackenzie's veracity was questioned over a Murdoch story that contradicted what Anne Diamond had related, in seriousness asked "Who would you believe Anne Diamond or me?" or words to that effect.

No real choice there Kel. Like comparing Nick Davies with Louise Mensch or Amanda Platell. Just thought I'd lob that in before the hamster ate it.