Following the legal threat made by the perpetually thirsty Paul Staines, which my legal team rebutted on my behalf and of which no more has yet been heard, one might have thought others so inclined would have stopped and thought before trying it on. But that thought would have been misplaced, as I discovered two months ago, following a routine piss-take of the odious flannelled fool Henry Cole, Staines’ tame gofer. 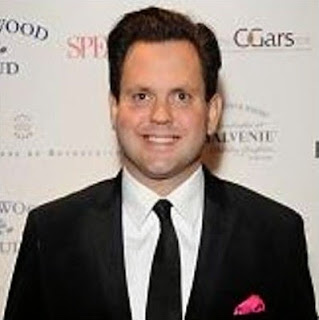 And here's our latest hopeful claimant

Zelo Street had made jocular reference to a photo posted by @sketchaganda, which supposedly showed Master Cole holding a swan by the neck. He was not, of course, and after having a think about it, I withdrew the post. That was on March 1. Nothing happened for over a week. Then, on March 8, the Guardian published a profile of me. Only after that was a legal threat made. Readers will draw their own conclusions. 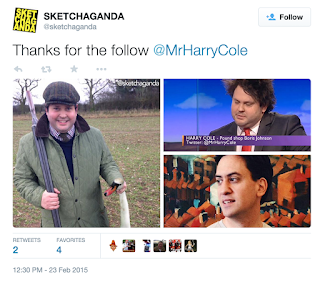 The letter, from Griffin Law, a legal practice in Kent, began as follows:

“We are instructed by Harry Cole … We refer to various untrue, defamatory and malicious statements made by you about our client online that have caused and continue to cause our client to suffer damage to his reputation [my emphasis] such that those statements amount to actionable libels and malicious falsehoods. As those statements include statements of fact as to criminal wrongdoing on the part of our client, those libels are actionable per se. This gives rise to a claim in damages and a right to interim injunctive relief against you.

Moreover, your course of conduct with regard to our client is manifestly contrary to the provisions contained in the Protection from Harassment Act 1997. You have unreasonably and wantonly caused and continue to cause our client to suffer from considerable alarm and distress. This also gives rise to a claim in damages and a right to interim injunctive relief as against you”.

The letter then describes the post, word for word, despite it having been deleted soon after publication. But back to Griffin Law. 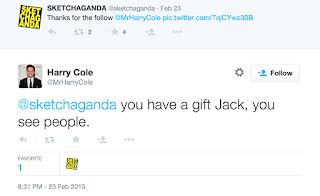 Then we arrive at the giveaway. And here it comes.

“The untrue and defamatory allegations that you had published on your blog, and republished on Twitter, will have been read by thousands of people who read your blog or follow you on Twitter. That readership is, according to a profile of you that appeared in The Guardian on 8 March 2015, ‘largely made up of media professionals’ - our client’s peers” [my emphasis].

And there was more.

“This is the latest in a course of conduct on your part that constitutes actionable harassment [pot, kettle] … Irrespective of the differences between our client and you over the past few years, there are quite properly limits beyond which neither of you ought to be prepared to go. On this occasion you went beyond those limits and it is right in the circumstances that you should apologise to our client for doing so”.

A number of demands were then made. And then came this priceless gem.

“This is evidence of good faith on the part of our client. He is willing to give you the chance to settle this matter without recourse to the courts and at minimal cost to you. We are not, for example, seeking the payment of £5,000 or any sum by way of contribution to our client’s costs [my emphasis]”.

A deadline was then given, with this warning in conclusion.

And there you have it.

Quite apart from the revelation of the level of surveillance being maintained by someone - one can only assume it is someone sympathetic to the Fawkes rabble - upon me, there is also the matter of going to the Land Registry in order to confirm that I hold the deeds to my house. On both of those matters I make no further comment.

Nor do I make any further comment on the litany of abuse, much of it malicious and untrue, from Master Cole towards me in the past.

But a reply was required, and so here it is (this was in the form of an email from me, and not from my lawyers).

“1.    The letter does not comply with the pre-action protocol as it does not set out the meaning contended for.  In any case,

2.    Any defamatory meaning is defensible under s.3 of the Defamation Act 2013 because it is:
a.    A statement of opinion
b.    The basis of the opinion is clearly set out
c.    The basis of the opinion (the photograph) qualifies as privileged under s 3(7)(a) because publication of the photograph would have been defensible as a matter of public interest under s.4 of the Act.

3.    I removed the article once it was made clear to me that the photograph was not genuine.

4.    If proceedings are issued I will apply to strike out and seek costs from your client and draw the attention of the Court to the content of this letter”.

There is also the inconvenient fact that Master Cole has taken no action against @sketchaganda - quite the opposite, in fact, as can be seen from the screen shots above.

Nothing has been heard from Griffin Law, or their client, since.

Some may have formed the impression that this threat was only issued because of, and only after the appearance of, the Guardian profile. Others may wonder why it was issued at all, given there was no need for my lawyers to write in response. On these I also make no comment, other than to reiterate that any legal threat against me and the Zelo Street blog will be robustly defended - whoever makes it.

Land Registration files are public documents. £3 each and £3 for the plan.

@ Anon
"Land Registration files are public documents. £3 each and £3 for the plan"

Not according to their web site.

But perhaps you have other sources?????

There are a lot of copycat unofficial sites which charge a fee to do the work, a bit like the passport rip off sites.

Official copies via the official www.gov.uk website are £3 each. I carry out searches on an almost daily basis. The highest they have ever been is £4 each.

Basic Land Registry info is available online for a few quid as said.

But whoever you pay to do the work you need the address first. Which brings us back to Fawkes and Co. digging into Tim's life.

Hopefully the correspondence has been passed to the Guardian as a news item?

Thanks Anon and SteveB for Land Reg info.

it turned out that Harry Cole was in fact choking the chicken.

At least 2 top London law firms are very well aware of his bullying and what it has done to his victims. One superlawyer refers to him as a "Spud". The amount of women this huge sweaty lump has photographed makes him look like he has a problem. He needs to buy some blow up friends.