The danger of always trying to say something yet more outrageous is that, sooner or later, the defamation line gets crossed and seriously expensive legal trouble follows. One need only ask Sally Bercow to know how that can pan out. But one person not for asking, and potentially dropping herself in the doo-doo yesterday, was semi-professional motormouth Katie Hopkins, who now faces the daunting prospect of being forced to say sorry. 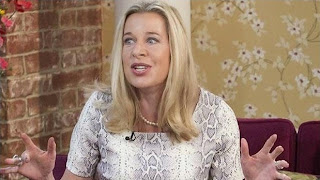 For reasons best known to herself, Ms Hopkins snapped yesterday at food writer and campaigner Jack Monroe “scrawled on any memorials recently? Vandalised memory of those who fought for your freedom. Grandma got any more medals?” This was a most unwise course of action, as Ms Monroe’s reply suggested.

“I have NEVER 'scrawled on a memorial'. Brother in the RAF. Dad was a Para in the Falklands. You're a piece of shit”. It got worse for Katie, as she left the offending Tweet in place, and her target set out her options concisely: “I'm asking you nicely to please delete this lie Katie, and if I have to ask again it will be through my lawyer”. Ms Hopkins could not hope to stand up her claim, so she really had only one way out. 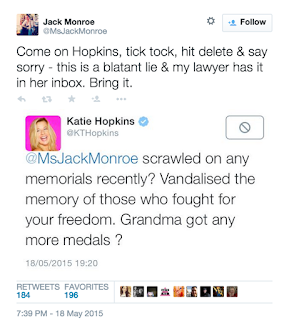 Sadly, the Hopkins way is never to even consider retracting, and so Ms Monroe had to remind her that this was being taken seriously: “Come on Hopkins, tick tock, hit delete & say sorry - this is a blatant lie & my lawyer has it in her inbox. Bring it”. Still no response. So a further reminder was issued. “Dear @KTHopkins, public apology + £5k to migrant rescue & I wont sue. It'll be cheaper for you & v.satisfying for me”. 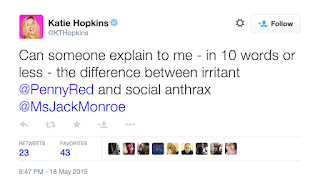 And then something almost unheard of happened: Katie Hopkins actually deleted the offending Tweet. However, and here we encounter a significantly sized however, there was no apology, and she couldn’t let go without one last vindictive kick at someone who had forced an act of half-decent behaviour: “Can someone explain to me - in 10 words or less - the difference between irritant @PennyRed and social anthrax @MsJackMonroe”. 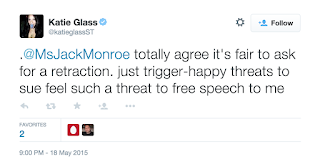 Something else happened in the meantime: Katie Glass, supposedly a Sunday Times reporter, waded in, on the pretence that she was injecting a voice of reason. It is not the first time Ms Glass has jumped into a Twitter scrap involving another Murdoch contributor. But back to the main event: the Hopkins Tweet had gone, but the lack of apology, together with a refusal to drop the bone, meant she was by no means in the clear.

This was underscored this morning when lawyer Mark Lewis - you saw him at the Leveson Inquiry - told Ms Monroe “Feel free to call”. Katie Hopkins could have just pulled the Tweet, admitted she had mistaken Jack Monroe for someone else, and apologised. But that is not the way with those who believe their own publicity. Now this bad loser faces the prospect, instead, of being told to say sorry, and pay rather more than two dollars.

Ms Hopkins - an example of someone who dishes it out but doesn't like the consequences.

Tim, We know what she looks like. Save us the picture next time. Perhaps one of Jack Monroe could fit the bill instead.

Much as I loathe Hopkins, I don't see what's libellous about her tweet?

She didn't say Ms Munroe had done anything. She asked if she had.

If I were to tweet that "Mr X is a murderer" then that would be libel.

But if I tweet someone with the question "Have you ever killed a man?" surely that's not libellous? Especially if they then reply in the negative (as Munroe did).

"She asked if she had"

That's a bit disingenuous - Ms Hopkins added "recently" thereby inferring she had done it before?

Also take into account the various insinuations added and you can almost hear the sneering tone of the tweet.

@Rob - Oh, I don't for one moment ignore the insinuation. But is it libellous? Surely to be libel, you have to say something is a true when it is not. She didn't say it was true, though it was dripping with insinuation.

Can you be done for libel for merely implying something? It's an honest question - I don't know and would be fairly surprised. People insinuate things all the time.

A tweet is potentially libellous in England and Wales if it damages someone's reputation "in the estimation of right thinking members of society". It can do this by exposing them to "hatred, ridicule or contempt". It is a civil offence so you won't be jailed but you could end up with a large damages bill. The rules also apply to re-tweets.

The best defence is if you can prove the contents of the tweet are true.

You could also claim it was "fair comment" - your honestly held opinion on established facts.

The only way to be completely safe is to avoid tweeting gossip unless you know for a fact that it is true.

With reference to my above comment, of course I meant to say Laurie Penny defended those who wrote on the war memorial, she didn't actually write on it herself. Sorry.

Rick - No, lebel is when you write something that "MAY" or "TENDS TO" (key point) expose him to hared, ridicule or contempt, cause him to be shunned or avoided, lower him in the estimation of right-thinking members of society generally or disparage him in his business, trade, office or profession.
[McNaes - first port of call for real and amatuer journalists]
Writing "have you vandalised any war memorials recently" can be seen as suggesting that you have already done it in the past, and may do it again. Vandalism is criminal damage and is thus a crime.
Suggesting someone has committed such a rather distasteful crime, when they clearly have not, in print, to tens of thousands of people when they haven't does deserve an apology. While its easy to go "oh, well, she was just messing about" I think you'll find the Twitter Joke trial had to go a pretty long way for someone to finally accept that no, it was just a joke. But that took a lot of money and support to save a very innocently naive chap from a criminal record.
Hopkins is slowly learning, because she's had fuck all legal training in media law, that saying what the fuck you like can cause you trouble. Monroe has a right, under British law, to tell Hopkins "that's libel, apologise or face British law"... Hopkins has the same right under British law to fight it through a court and justify her words, assuming she has suitable defence - Justification? Fair comment? Privilege? Or go for Accord and satisfaction or offer of amends (a polite bung and "sorry".
If people and celebs are insistent on being "blogger journalists" on websites, Twitter and Facebook, it'd be a fine thing if they had to learn what poorly paid local reporters were forced to study and pass exams in... - media law.
[Again, I recommend McNaes Essential Law for Journalists, an excellent and regularly updated book by David Banks, Tom Welsh and Walter Greenwood]

Pretty stupid rick, you must be team Katie to even attempt to defend the tweet