The Daily Mail has expressed its horror at the tragic death of 92 year old Olive Cooke. The longest-serving poppy seller in the country had apparently taken her own life after being inundated with begging letters. Moreover, it seems her personal details were being passed from one charity to another on a regular basis. “SHAME OF CHARITIES THAT DROVE OLIVE TO HER DEATH” thunders the front page headline today. 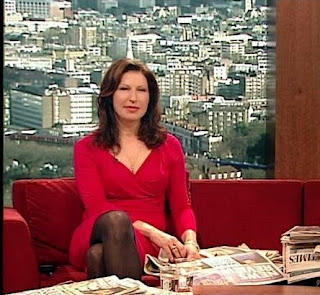 And no pundit was more aghast at this exhibition of intrusion than Amanda Platell, who told readers “how truly sickening that this most kind-hearted of women was preyed upon in her old age … Anyone with elderly parents or friends will be familiar with this nightmare. Cold callers and callous opportunists deliberately target the frail and susceptible - a generation for whom courtesy is as ingrained in their character as generosity”.

Also joining in is Daily Mail Comment, the authentic voice of the Vagina Monologue, ranting “Today the Mail reveals more shocking details about the torment suffered by Olive Cooke … what is most disturbing is the discovery that the personal details of the widow - who had 27 charitable direct debits at one stage - had been traded among charities, along with those of tens of thousands of other donors”.

The editorial continues “sensitive personal information is then sold on to other charities - for as little as 15p per individual - so they can try to solicit donations of their own. No charity worth its name should be taking part in this exploitative practice - which preys on the generosity of the vulnerable like Mrs Cooke in the most unscrupulous way”. Government action is then urged to ensure charities behave themselves in future. 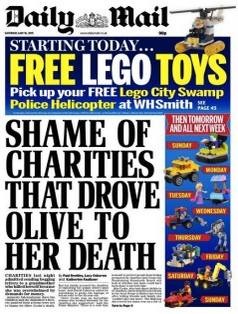 Ms Platell concurs: “charities are perhaps the worst offenders. As the Daily Mail has exposed, donating just £5 to a charity can trigger months of cold calls as they try to bully you into giving more … This cannot continue. We need legislation to punish companies and charities that pass on personal details. It should be a criminal offence to target the elderly or vulnerable repeatedly”. There you have it.

Yes, folks, “companies … that pass on personal details” should be punished. That’s a remarkable assertion coming from a pundit at the paper which topped the charts of Operation Motorman: as Nick Davies told in Flat Earth News, “Mail journalists had made a total of 985 requests (an average of at least one every working day for three years)” from Steve Whittamore. For personal information. Most of which was illegally obtained.

And, as for targeting the elderly and vulnerable, the Mail is characteristically silent on the doorstepping of Alice Sullivan’s 102 year old grandmother - for the sole reason that Ms Sullivan is Chuka Umunna’s girlfriend. Yes, the paper that is today urging the Government to crack down on the trade in personal information and preying on the elderly and vulnerable has significant previous when it comes to turning a blind eye to it.

Amanda Platell knows this. So that just makes her an even bigger hypocrite.
Posted by Tim Fenton at 13:00

On a vaguely related note, I was fascinated to read the last Sarah Vine article. "John Bercow is no oil painting, but he’s Brad Pitt compared with his cousin Alan"
Stones? Glass houses?

On a non related note, this is worth a read: