Grant Shapps - Why He Had To Go

As yesterday’s list of appointments by Young Dave was announced, there was one name not being pitched as part of his team of jolly good chaps: step forward (or rather, don’t) Grant “Spiv” Shapps, who had been Tory Party chairman before the General Election. Actually, it seems he had only been “Co-chairman” with Andrew Feldman. And while Feldman was confirmed as sole chairman, Shapps was, er, not. 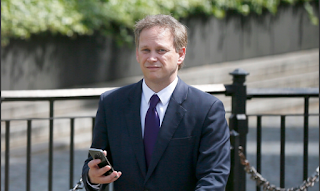 Shapps yesterday - the expression says it all

One might think that, after helping the Tories secure their first Parliamentary majority for 23 years, Shapps would be rewarded with a Proper Ministerial Job. But that assumes he did help secure that majority. What became all too clear during the campaign was that Shapps’ on-off relationship with the truth was becoming a distraction, and his blustering and dishonest appearance on Newsnight was probably the last straw.

What the Tories were not about to do was sack “Spiv” before the election - that would have been a gift to Labour and the Lib Dems, and knocked the party’s campaign out of its stride. So he was left in place and Cameron told anyone who asked what a jolly good job he was doing. The further reality is that Feldman, Lynton Crosby, and the Rt Hon Gideon George Oliver Osborne, heir to the seventeenth Baronet, were leading the campaign.

At first, there was bemusement as to why Shapps had come away with being made a Minister of State at DFID (that means Not Very Important). Faisal Islam observed “So party chairman oversees first majority win in 23 years ... gets demoted from Cabinet”. James Forsyth thought that “This isn't what the party chairman in an election winning campaign would expect as a reward”. But there was more to it than that.

Shapps, by his occasional spivvery, had endangered the Tories’ re-election efforts. He had claimed not to have kept using the alias “Michael Green” after becoming an MP in 2005. He lied. He even had the Tory Party’s lawyers threaten a constituent for stating that Shapps had indeed used that alias after becoming an MP. His Newsnight apologia suggested he had been stitched up by “A Labour blogger”. 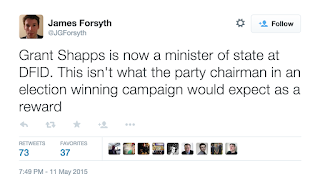 That blogger, as Chris Cook revealed, was the serially tenacious Tim Ireland of Bloggerheads fame, who had not been involved in the story suggesting someone close to Shapps had been creatively editing Wikipedia in the MP’s favour. Ireland was also a candidate in last week’s election, which potentially leaves Shapps open to a complaint under Section 106 of the Representation Of The People Act.

The last MP to fall foul of Section 106 was Phil Woolas, who lost his Commons seat as a result. Labour MP Karl Turner has already suggested he may make a Section 106 complaint over one of those Wikipedia edits. All of this will be known to the Tory leadership, which, with a Parliamentary majority of just 12, does not need Shapps to cause his party any further embarrassment. That is why he’s been quietly sidelined.

You can see Tim Ireland’s exposé of the Shapps dishonesty HERE.
Posted by Tim Fenton at 13:09

I bet all three of him (maybe more we dont know about) are very unhappy .

The Lord Lundy of our day:

"Sir! you have disappointed us!
We had intended you to be
The next Prime Minister but three:
The stocks were sold; the Press was squared:
The Middle Class was quite prepared.
But as it is! . . . My language fails!
Go out and govern New South Wales!"