As the BBC has reported today, net profit at News Corp has been halved over the past year. Moreover, “Newspapers … continued to struggle, with revenue in News Corp's news and information division falling 9% overall, as ad revenue declined 12%, and circulation and subscription revenue fell 6%”. The Times and Sunday Times have not made money for some time. Sales of the Sun are in significant decline. 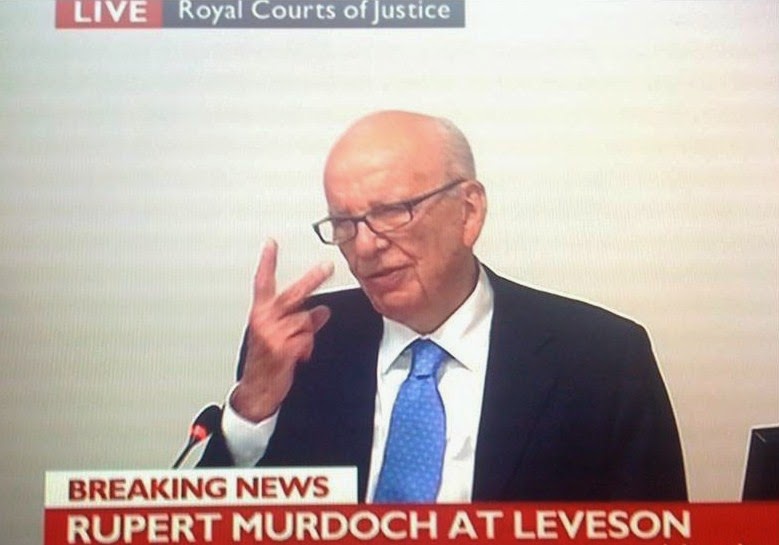 Yet Creepy Uncle Rupe keeps faith with newspapers. Why would he do that? Ah well. Murdoch also has investments in cable and satellite television, and to ensure these meet with, shall we say, more favourable trading conditions in the jurisdictions in which they operate, it is useful to wield power in those jurisdictions. Those who followed the progress and final collapse of his attempt to control 100% of BSkyB will understand this.

That power could be seriously harmed if Mil The Younger were to become Prime Minister after tomorrow’s General Election, and act on media plurality. So Murdoch the businessman and Murdoch the politician have come together to, so they hope, lubricate the wheels carrying Young Dave and his jolly good chaps back to Downing Street. The methods have been crude - and rather obvious. 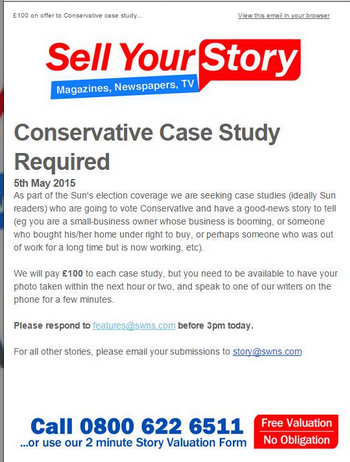 You pay them a little money ...

Yesterday, an advert proclaimed “Sell Your Story … Conservative Case Study Required”. Hopeful respondents were told “As part of the Sun’s election coverage we are seeking case studies (ideally Sun readers) who are going to vote Conservative [my emphasis] … We will pay £100 for each case study, but you need to be available to have your photo taken within the next hour or two, and speak to one of our writers on the phone”.

And so it came to pass that today’s edition of the Super Soaraway Currant Bun yielded a crop of those stories: good Tory-supporting support acts, telling “Tories are safe … they pulled us out of the recession”, “People have more money in their pockets”, and “I used to rent, now I can buy my own family home”. Just the ticket! What readers are not told is that one or more of these stories was about a Tory voter.

... and you turn your purchase into influence

Nor were readers told that money may have changed hands. But what we can see all too clearly is the way in which Murdoch exercises power: he appears to spray money up the wall on papers that are either well past their profit-generating heyday, or even losing money year on year, but all the while that money is, in effect, an investment in his being able to trouser even more money from the likes of BSkyB.

Rupe does that by helping to install compliant politicians in positions of power; having helped them to ascend the greasy pole, they are then more likely to yield to his wishes, more ready to do his bidding rather than that of the electorate who voted for them. Thus the wholesale corruption of our democracy that starts with a hundred quid here and there, and ends up with ministers at his beck and call.

He says he wishes politicians would leave him alone. Rupe speaks with forked tongue.

[The "Sell Your Story" advert was picked up on by my good friend Peter Jukes, whose book on the Hacking Trial, Beyond Contempt, is available at all good booksellers, and online in both print and electronic editions. You know you want a copy]
Posted by Tim Fenton at 13:18

Ssssssssssssssh - don't give the game away - they'll be asking for more than a measly £100 for stories.

From what I can see these three case histories are being used as testimonials and they may have been obtained fraudulently if a sum of money has changed hands during an election in order to induce unsubstantiated evidence favourable to a political party.

Regardless of whether or not this maybe one for IPSO (or even the ASA), the real losers will be the British electorate should enough Sun readers in the marginals commit to voting Conservative on the basis of ignorance of the fact that these stories were paid for.