Although this country has a long history of newspaper owners and editors being given knighthoods and peerages, the likelihood of this being extended to Rupert Murdoch is not unadjacent to zero, given he has become a US citizen. But someone was well-enough disposed towards the old tyrant: back in 1998, then Pontiff John Paul II awarded the Dirty Digger a papal knighthood, not that many of his flock were much impressed. 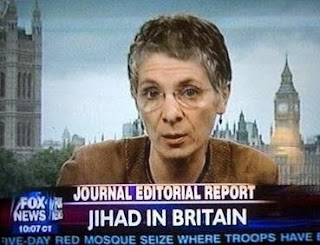 As the Independent observed, “The Roman Catholic church is receiving complaints from worshippers following news that Rupert Murdoch has been awarded a papal knighthood from Pope John Paul II … Senior Catholics are said to have been ‘mystified and astonished’ when they heard that the purveyor of newspaper sex, scandal and nudity was made a Knight Commander of St Gregory at a ceremony in Los Angeles last month”.

And this week’s rant by one of Murdoch’s pundits might have Vatican authorities having more than a little buyer’s remorse: the Times employs the services of Melanie “not just Barking but halfway to Upminster” Phillips, but she also writes for the Jerusalem Post, where her latest column has excoriated the Papacy over its recognition of a Palestinian state. Mel, as one might expect, does not hold back.

Titled “As I see it: the Vatican channels war against Israel”, the column asserts that the recognition “puts the Vatican publicly behind the Palestinian strategy of waging war against Israel by diplomatic means … The Vatican’s ‘treaty’ is no more than a crude propaganda stunt assisting a war of extermination … the purpose of such a state is to create the platform for a devastating war on Israel”. And, as the man said, there’s more.

“It would appear that what the pope has actually recognized and endorsed is the open intention to destroy Israel and replace it by Palestine”. Why would he do that? As if you need to ask: “the destruction of Israel is a leftist cause. And Pope Francis has a leftist view of the world … he came from Latin America where the church embraced liberation theology, or the use of religion to bring about Marxist revolution”. It gets worse.

“Marginalized for many years as far-left extremists, these theological radicals have now been handed a potent weapon against capitalism – the obsession with global warming … Francis is dedicated to ending the capitalist order … To further the attack, he is deploying the eco-weapon in the forthcoming papal encyclical on climate change, expected to reflect his belief that anthropogenic global warming is destroying the planet”.

And the pièce de résistance: “Climate change is not only junk science, based on corrupt academic practices, intimidation and outright scientific frauds. It is rooted in deep green environmentalism. Associated with New Age syncretism and movements for population control, this movement is pagan and anti-human”. That’s batshit even by Mel’s standards. It’s also highly likely to offend rather more Roman Catholics than Rupe’s gong.

So is Murdoch going to keep both Mel and Papal Knighthood? Could be a tricky one.
Posted by Tim Fenton at 10:55