Zelo Street regulars will recall the name of Rob Wilson, the Fred Scuttle lookalike who is supposed to be Tory MP for the Reading East constituency. Wilson has a track record of indulging in activities other than those that are strictly necessary in order to serve his constituents, such as joining the Mail’s campaigns against the BBC, trying to discredit the Leveson Inquiry, and his personal vendetta against Commons Speaker John Bercow. 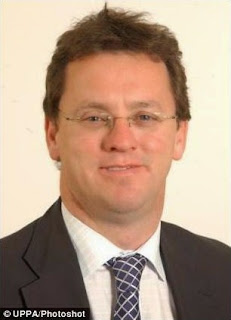 Not nearly as funny as Benny Hill

Wilson’s correspondence has, by mere coincidence you understand, also found its way to the perpetually thirsty Paul Staines and his rabble at the Guido Fawkes blog, another activity that is not part of his constituency duties. What is a part of those duties, though, is the courteous and prompt addressing of constituents’ concerns, no matter what the forum, and however correctly or politely registered.

This minor detail appeared to escape Wilson in the immediate aftermath of his re-election last week, after constituent Lynda Bowyer pitched the question “Homelessness is up 700% in #RdgUK during previous coalition. Wonder what the #Conservative cuts will do to address this @RobWilson_RDG?” Now, this issue may be primarily down to the local authority, but that does not excuse Wilson’s reply. 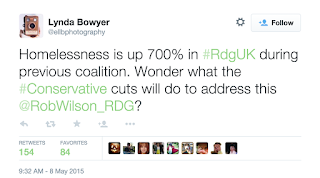 He could have waited to reply, or pointed Ms Bowyer to an email contact, but instead sniped “Don’t be a bad loser”. Even though I’ve seen Wilson indulge in some pretty cheap and nasty behaviour in the past, that induced a double take. My local MP is a Tory, he knows my politics are not the same as his, and yet he is always unfailingly courteous. Many responding to Wilson’s dismissal have been rightly furious.

So what has been his explanation? After all, homelessness in Reading has indeed increased significantly since 2010, and local news site getreading contacted Wilson, initially to no avail. And when the response came, it all too predictably arrived without any sign of an apology. Instead, Wilson claimed that “he had been awake for 30 hours and misread the tweet”. Was that the same as being “in an overtired state”?

He told getreading “140 characters is not a proper way to answer a significant question. It would never have been my intention to answer a question of that nature on Twitter” (it was Twitter’s fault), “I think we are at a very sensitive time in the political calendar and obviously this sensitivity has come out into the open” (meaningless drivel), and that he was responding to Ms Bowyer as “an activist journalist”, and not a constituent.

But Wilson wants his adoring public to know that “He told getreading he had now replied to Mrs Bowyer’s question in full”, although this has not been indicated on his Twitter feed, where he made the remark that got him into the mess in the first place. Why not? And where is his apology? He needs to make one, and make it soon.

Otherwise, his constituents may start to wonder what they were doing returning him to Westminster. Because this kind of behaviour is, for an MP, just not good enough.
Posted by Tim Fenton at 17:23

To be fair he could have used the Kipper "hacking" excuse.