David Miliband Back? No Chance

Some of those in the right-leaning part of the Fourth Estate are so fed up with the Labour leadership contest that, despite the creative talents employed spinning, bullying and smearing the hopefuls, they wish that there was at least one other candidate - and that would be Mil The Elder. Sadly, he’s working in New York, and is most unlikely to be even considering a return to UK politics in the foreseeable future. 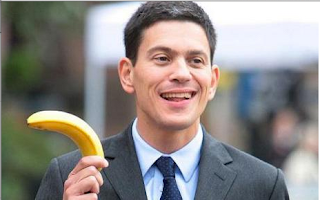 Of course, the press would take him far more seriously than his brother. Oh, hang on a minute ...

This minor inconvenience has not deterred Andrew Pierce, who is allegedly a consultant editor for the Daily Mail, although it would be more accurate to call him a shameless Tory cheerleader (hence his Twitter handle @toryboypierce). “How Miliband the elder could still lead Labour” he suggests, in true Ron Hopeful mode. Why, as a Tory, should he give a fig who leads the Labour Party? Ah well. Here the really hopeful stuff begins.

The party’s MPs, Pierce pretends, are “Haunted by their failure to win under quasi-Marxist Ed Miliband”. So says quasi-journalist Pierce. But do go on: “in a fascinating development, I learn that the elder and less fanatically socialist Miliband brother - chosen political son and heir of Tony Blair - could be available in three years’ time”. Available for what? Cabaret? Stand-up? More importantly, will Pierce get to the point?

“I’m told he has a break clause in his contract at the International Rescue charity in New York. Surely it’s news which will have many in the Labour Party dreaming of a triumphant return for the wandering leader they never had … The obvious question is how he would get back into the Commons. But the answer could come in the form of Barry Sheerman, the 74-year-old MP for Huddersfield, who was re-elected with a majority of 8,000”.

And here’s the punchline: “He may be persuaded to stand down for Miliband Major”. And he may not. But let me enlighten Pierce, and anyone considering taking his poorly informed speculation on trust. David Miliband ducked his first chance, which was to challenge Pa Broon for the Labour leadership when Tone stood down in 2007. His supporters were optimistic. And he failed them.

Pierce’s preferred leader was then expected to make his move against Brown in the dog days of the latter’s premiership, in time to have a new, younger - and more Blairite - leader in place for the 2010 General Election. His supporters were hopeful. And, for a second time, he sat on his hands and let the opportunity slip. When it came to the leadership contest after Brown and the election had gone, those supporters were not sure.

They had good reason so to be: the Miliband who wanted the job, and who had done his homework, was the younger one. David Miliband showed himself to be devoid of the ability to make his move at the right time. The idea that the Labour Party wants someone like that in their top job is laughable. Which suggests that Andrew Pierce, as a Tory, is doing no more than having a laugh - he is not serious.

And he’s not much of a serious journalist, either. Back to the crappy columns, then.
Posted by Tim Fenton at 17:31

My impression is that David M. has never shown much desire for the job of party leader. It is other Blairites who keep pushing him forward, with little obvious enthusiasm from the man himself.