The BBC continues to back shows like Top Gear, not because of its main presenter Jeremy Clarkson, but in spite of him: the programme brings ratings, it sells in dozens of countries around the world, and that means money. Rows caused by Clarkson’s tendency to open mouth and insert boot are not sufficiently bad to overcome the persuasiveness of this logic. 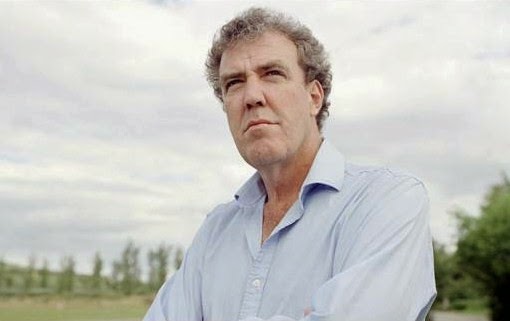 At this point in the programme, someone has located an extremely blunt object, picked it up, and projected it at great speed ... straight up my jacksy

What the Corporation will make of the latest Top Gear stunt, though, is anyone’s guess, and that may be why Clarkson, as ever, is blaming everyone apart from himself for what happened. He and fellow presenters James May and Richard Hammond had been filming in the south of Argentina. Events along the way developed not necessarily to their advantage.

It seems “locals rounded on the Top Gear team in apparent protest at a number plate which appeared to refer to the 1982 Falklands war. A Porsche used in filming had a registration plate that read H982 FKL. On his return to the UK Clarkson tweeted: ‘The number plate WAS a coincidence. When it was pointed out to us, we changed it’”. Pointed out what with? A dirty great club?

Clarkson is certainly trowelling on the allegations today: “‘We hid under the bed from Argentinian mob. Make no mistake, lives were at risk’: Clarkson reveals terror of presenters and crew as they were pursued by blood-thirsty thugs - all with the connivance of the government” tells the Mail. And, as Jon Stewart might have said, two things here.

One, there is an awful lot of “talking up” being done with this story, and two, an equal amount of unloading on the Argentine authorities. Strangely, none of the other Britons who visit the country seem to encounter the same hostility – unless, of course, no Britons at all dare visit, which is preposterous. This points to a deliberate strategy of self-promotion and arse-covering.

After all, remember, Clarkson was the one who said “Supercars are supposed to run over Arthur Scargill, and then run over him again, for good measure. They're designed to melt ice-caps, kill the poor, poison the water table, destroy the ozone layer, decimate indigenous wildlife, recapture the Falkland Islands, and turn the entire Third World into a huge uninhabitable desert... but only after they've nicked all the world's oil”. What was he driving? A Porsche.

And, as to the number plate of that Porsche, H982FKL, perhaps Clarkson might nip round to the Polish embassy and check out the kind of reception he might receive there if he fetches up in an equally hot car bearing the registration mark, oh I dunno, how about K4TYN?

This was a typically stupid stunt, and it went wrong. Say sorry, Jezza.

[UPDATE1 6 October 1600 hours: the Daily Mail's Peter McKay, aks The World's Worst Columnist, has come to more or less the same conclusion I did.

He tells that "Given the nature of Top Gear, which specialises in stereotyping foreigners for comedy purposes, motoring into Argentina with a number plate that would annoy the locals might seem a top jape. Indeed, it’s hard to imagine Top Gear making a show in Argentina without some sardonic reference to its defeat by Britain in the 1982 Falklands War".

Then he observes "But DOING so from the port from which the light cruiser General Belgrano set off on her final voyage — from which 323 of her crew were never to return — would surely have been tricky taste-wise, even for cocky Clarkson". Quite.

McHackey's only problem is that his account had to wait until after midnight to be published, so he's just six and a half hours too late. Never mind though]

[UPDATE2 10 October 1530 hours: unfortunately for the version being told by Clarkson and the rest of the Top Gear team, it seems there was another set of number plates found with the now abandoned car.

These had been made up to show the index mark BE11END, and who knows, perhaps Jezza is a member of the Toby Young fan club. But the idea that H982FKL in Argentina was an accident is now rendered at least suspicious, if not implausible, by their discovery.

Top Gear makes its name by doing things like winding up foreigners. It's looking more and more as if this was another in that vein. The folks at the Beeb may not be impressed this time]
Posted by Tim Fenton at 17:25

I suggest someone checks when the number plate last had a transfer of ownership. Would it be August this year - another coincidence?

It is shown here though: https://www.vehicleenquiry.service.gov.uk/

It's listed on the DVLA website as a Porsche registered on 30 May 1991, which agrees with the H982 part of the number. Which proves nothing though.

By all means pile misery on Clarkson - he deserves it for the spring 2010 series where he helped Cameron. But don't forget that without the executive producer Andy Wilman (another public school boy, in this case even the same school as Clarkson) the idea wound't have got off the ground.

When the row blew up regarding the leaked out takes (eanie meanie etc etc...) it was more likely that Wilman would have had access rather than Clarkson. Ditto the dubbed commentary in the Burmese bridge fiasco.

But back to the latest row/ publicity stunt. In your average backwoods Argentinian town the disputed oil deposits - sorry, islands - are called the Malvinas. How would any of the locals associate FKL as possibly an abbreviation for a name they don't use in Spanish? It would take a high knowledge of English - even most English wouldn't have thought of it without being prompted. Unless someone told them in order to trigger a response for "comic effect" and then got more than they bargained for. Assuming it really was that bad and not staged.


As I pondered in a previous row, if the BBC cancelled the contract would Wilman, Clarkson & Co. be able to carry on making the series and selling it to the massive overseas market - and possibly Sky. I reckon they'd make more money.