The Twitter troll fights just keep on coming, and an awful lot of them seem to feature (thankfully) former Tory MP Louise Mensch. The latest in the genre shows that she actively goes looking for them. It also shows that there are some still in the Commons who ought to know better than humouring her. And on the sidelines are those who definitely did not ask for her participation. 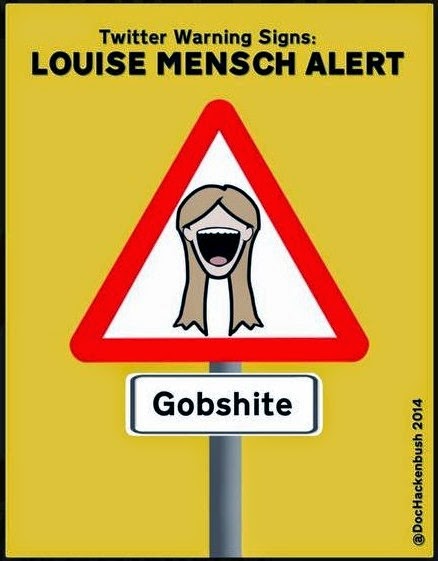 Yes, this scrap was started by someone who definitely didn’t expect the Spanish Inquisition: Tim Montgomerie took to Twitter to post his observations on listening to the radio, surely as inoffensive as it gets. “My friend [Nadine Dorries] has just told Radio 4 she supports a Con/UKIP pact. Evidence is a pact would help only Labour”. Little did he know Ms Mensch was lurking, ready to pounce. 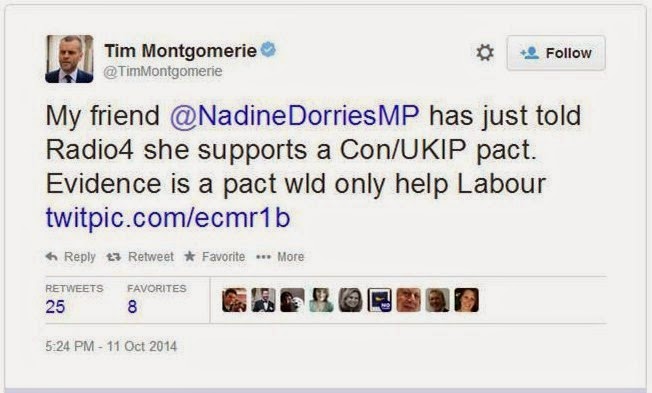 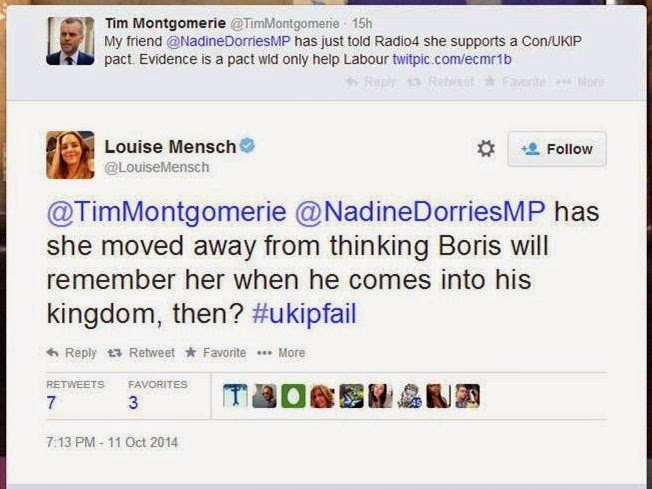 “Has she moved away from thinking Boris will remember her when he comes into his kingdom, then?” was the opening snark. The fragrant Nadine could have left well alone, but then again, this was a posh Southerner, so maybe not: “As you were very definitely ‘forgotten’ by Cameron. If I am, I won’t desert my seat and hand it to Labour” [probably not, they came third there in 2010]. 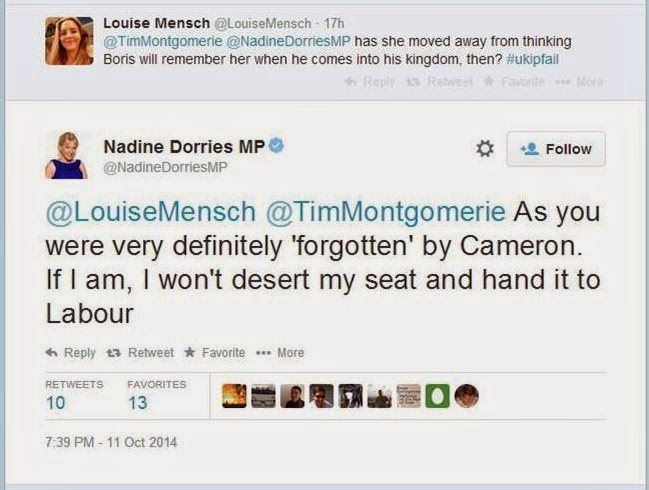 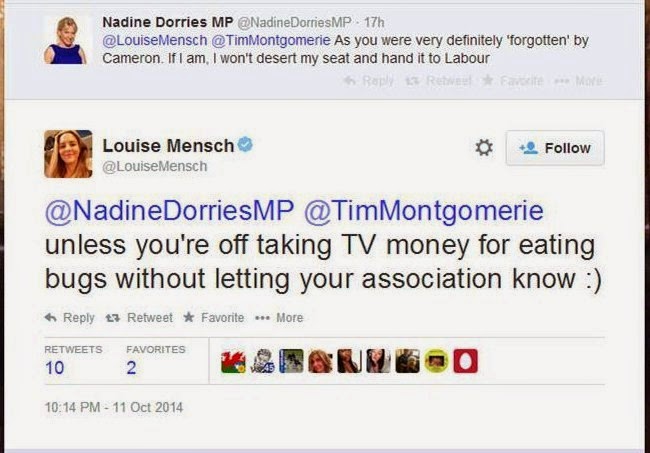 Troll battle was now well and truly joined: back came Ms Mensch. “Unless you’re off taking TV money for eating bugs without letting your association know”. Fighting talk! Back came another Dorries bon mot: “Parliament was in recess and I didn’t miss any votes, unlike you, who worked a three day week until you quit”. 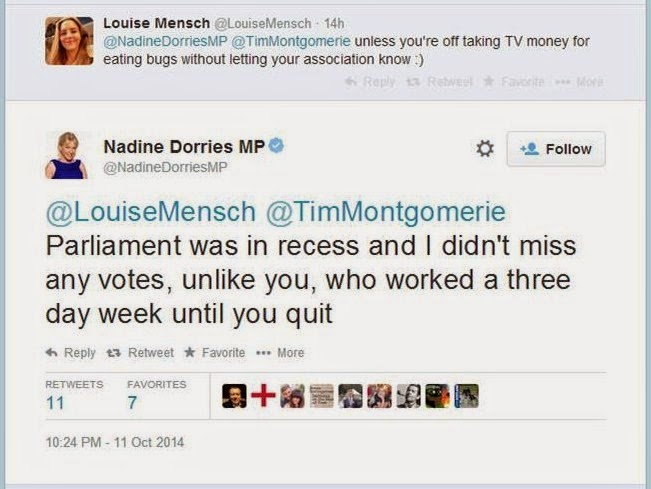 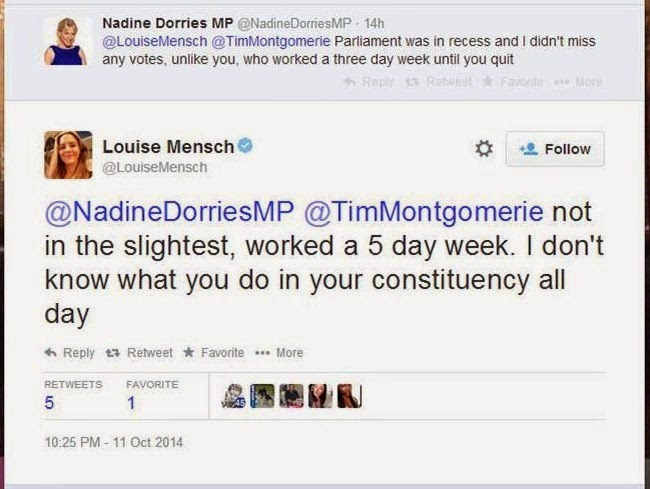 Louise wasn’t having that. “Not in the slightest, worked a five day week. I don’t know what you do in your constituency all day”. Ouch! That was it, Nadine reached for the smearing iron: “Any other comments you would like to make when you put the pop bottle down Louise?” Remember, Ms Dorries is still an MP. 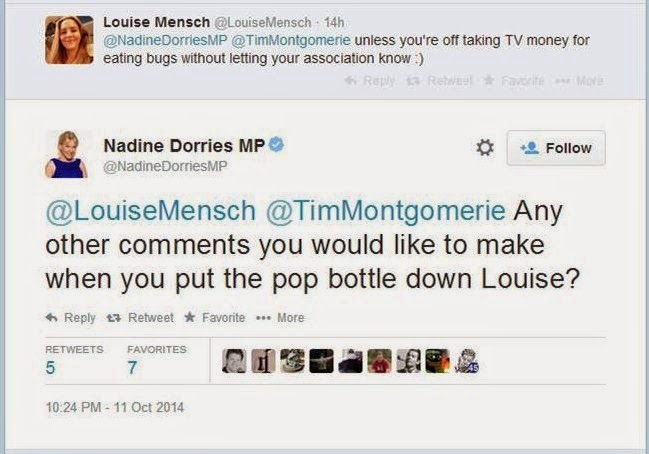 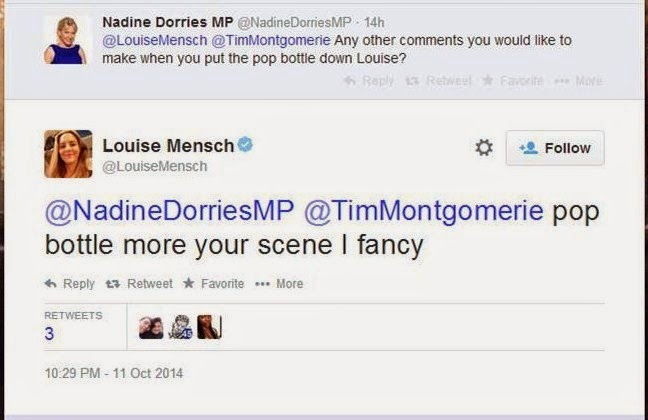 Was there any further Mensch magic to come? You betcha, says Sarah: “Pop bottle more your scene I fancy ... and it will be interesting to see how you square your love of Europhile Boris with the UKIP he despises”. Last word to the woman from Merseyside? “Yep, I’m a pop woman, never been into the hard stuff, unlike some, eh Louise?” The smearing iron is seeing good service here. 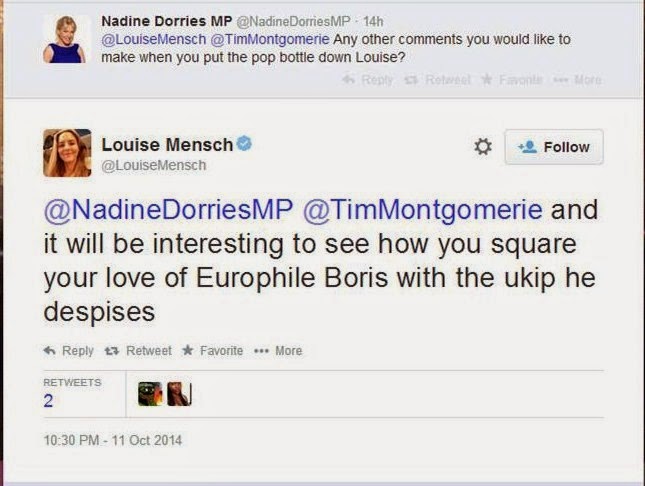 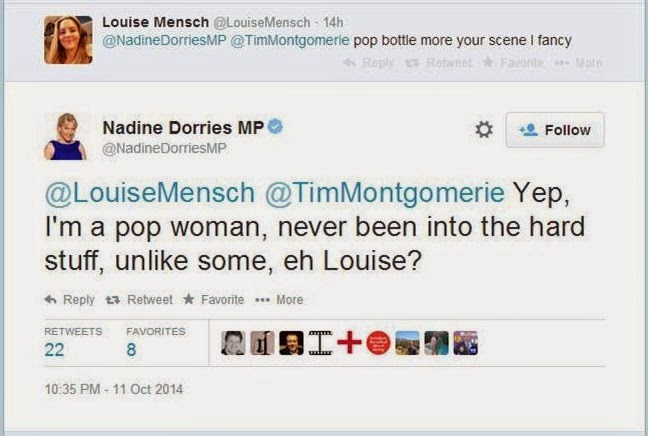 How to score this one? On the one hand, Louise Mensch got maximum trolling points by jumping into a thread she need not have, but then, Nadine Dorries scores well by humouring her – and saying things that may not be true. Ms Mensch is the one who, as far as it known, does not drink, while Ms Dorries is, by her own admission, wont to pour a glass of vino of an evening.

And Louise is right on one point: Bozza is an appalling charlatan. Eventually this pans out as another of those Fayed versus Hamilton battles – you don’t mind who loses, and only wish they both could.

[UPDATE 13 October 1425 hours: the perpetually thirsty Paul Staines and his rabble at the Guido Fawkes blog have decided to run this story as if they were the first on to it. 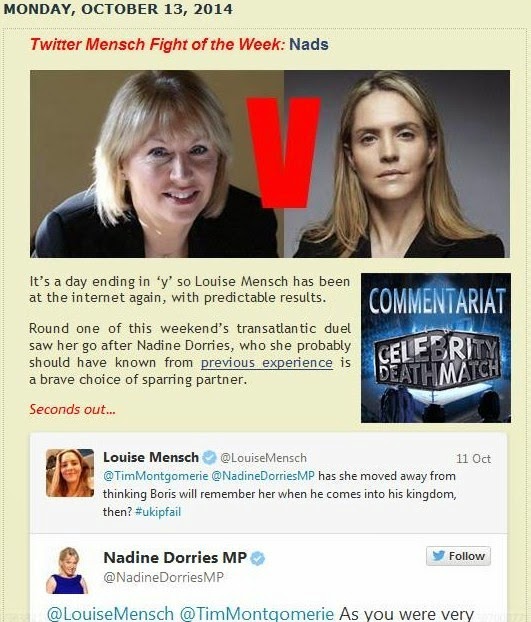 Yes, The Great Guido is now so desperate for stories that he is running today what this blog ran yesterday. What was that about "You're either in front of Guido, or behind"? It looks very much like we're well ahead of the Fawkes rabble right now.

Must try better, lads. Another fine mess, once again]
Posted by Tim Fenton at 13:31

"you don’t mind who loses, and only wish they both could."

And the crowd shout "Come on Tim" (just like yesteryear) "give us another quick service" for a return of another feisty rally between combatants".

Sponsored by the makers of endurable "pop"corn.

I do love these menshn reports. Keep 'em coming Tim.

Life in NYC must be really tedious; are there no bitch - fests over there?!

What we really want to know is - did the fragrant Nadine receive a “Sophie Wittams” type email from the Great Guido Gang of Four?

And which of them was the bait?

No, doesn't bear thinking about - forget it.