Only The Press May Troll

The Mail On Sunday and Sunday Express are singing from the same hymn sheet this morning. “Two Years’ Jail For Vile Trolls” thunders the Express, while the Mail concurs: “Web Trolls To Get Two Years In Jail”, going on to tell of “Cyber-mobs poisoning Britain”. But, as Captain Blackadder might have observed, there was only one thing wrong with this idea: it was bollocks. 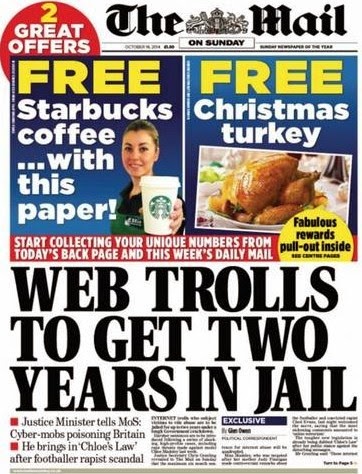 Trolling is A Very Bad Thing!

While the Mail rants “Internet trolls who subject victims to vile abuse are to be jailed for up to two years under a tough Government crackdown. Harsher sentences are to be introduced following a series of shocking, high-profile cases, including rape threats made against model Chloe Madeley last week”, it seems that someone is having a bout of double standards here.

One only has to see the comments of Chris Grayling, the non-lawyer who has somehow been handed the post of Justice Secretary, to see that the press is being singularly disingenuous: “These internet trolls are cowards who are poisoning our national life. No one would permit such venom in person, so there should be no place for it on social media”. Really? Do go on. 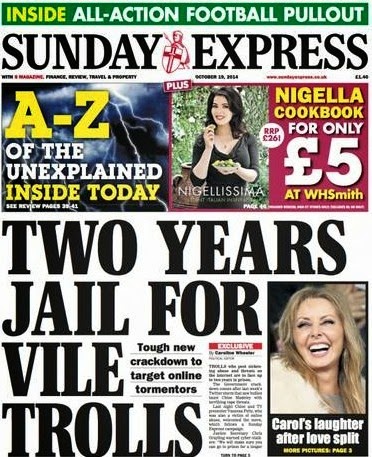 “This is a law to combat cruelty – and marks our determination to take a stand against a baying cyber-mob. We must send out a clear message”. So the Government wants to end “cruelty” and the rule of the “baying mob”, those who would not dare dispense “such venom in person”, and who are “poisoning our national life”? If so, it’s looking the wrong way right now.

While the cheaper end of the Fourth Estate is imploring us to “look over there” at the unfortunate Ms Madeley, the Mail and Express are not averse to doing a little of that “cruelty” of the “baying mob” themselves – and stuff the consequences. What they do in print – and then reinforce via, well, social media, actually – does far more damage than any keyboard hero secreted away in his bedroom ever could. 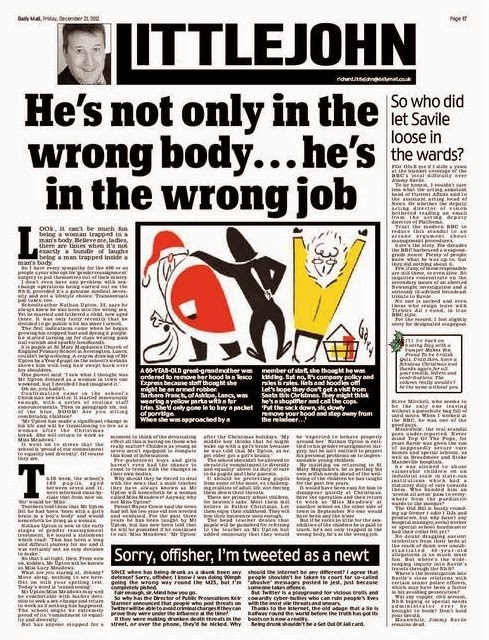 But this kind of mob cruelty is fine

Both papers were in the vanguard of presuming Christopher Jefferies was guilty. Both indulged in disgraceful hounding of Kate and Gerry McCann, with the Express having to publish a front page apology. And, if we’re talking teenagers being subjected to cruel treatment, don’t forget the Mail’s vicious attacks on Rory Weal for speaking at the Labour conference, or the creepy luring of Paris Brown.

And let us not forget the Mail’s monstering of transgender schoolteacher Lucy Meadows, which included a cruel and insensitive (even by his low standards) attack by the tedious and unfunny Richard Littlejohn – which was followed by her suicide. Yet, by inference at least, the press is telling us that these cruel and vicious attacks are fine – so long as they are the ones doing them.

Shame on Chris Grayling – legislating at the behest of the press, for their benefit.
Posted by Tim Fenton at 13:42

Will we still be able to troll IS?

Y'know, I suspect nobody will object to that.

I fear for Louise Mensch.

Tim Fenton said...
'Y'know, I suspect nobody will object to that.'

Just as I thought, there will be those who will be protected by any new law and those who are not considered to be worthy of protection. There is clearly trolling and there is trolling.

All we need now is a clear definition of what counts as trolling, proper communication of that definition and a population bright enough to understand it. In the meantime expect the police to be run off their feet by people who can't cope with others who simply disagree.