Friends fall out; political friends do a lot worse. The tribalism of modern politics was on full view this week as someone over in New York City belatedly realised that someone she had supported enthusiastically for so long was not on the same team. Yes, (thankfully) former Tory MP Louise Mensch discovered that Raheem “call me Ray” Kassam was not a Tory, but a Kipper. 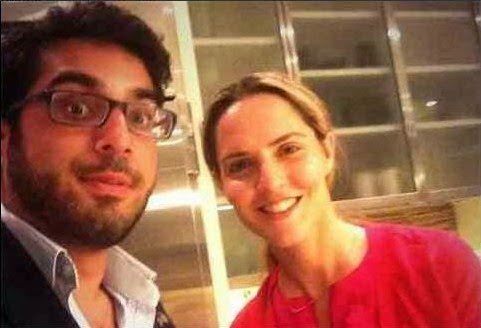 That Kassam had been in on the ground floor of the batshit collective that is Breitbart London – the late Andrew Breitbart was a big Tea Party fan – had not caused Ms Mensch to stop and think, until this week. The realisation sent her into a froth of petulance, abuse – and dishonesty, a tendency that was already apparent before she jumped ship and piled off to the States. 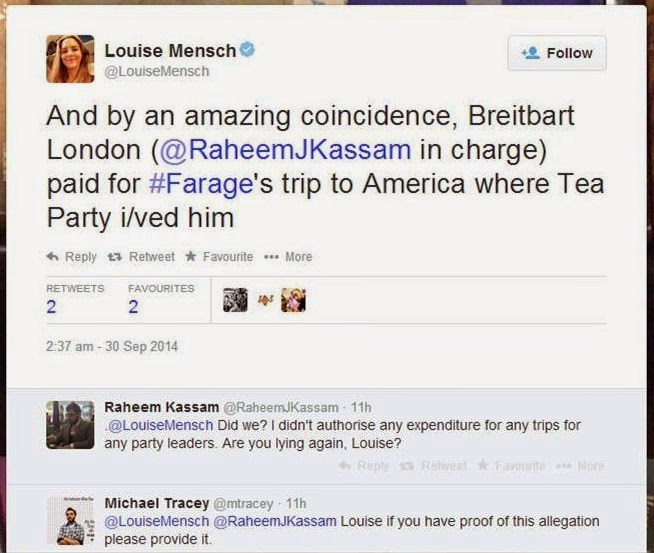 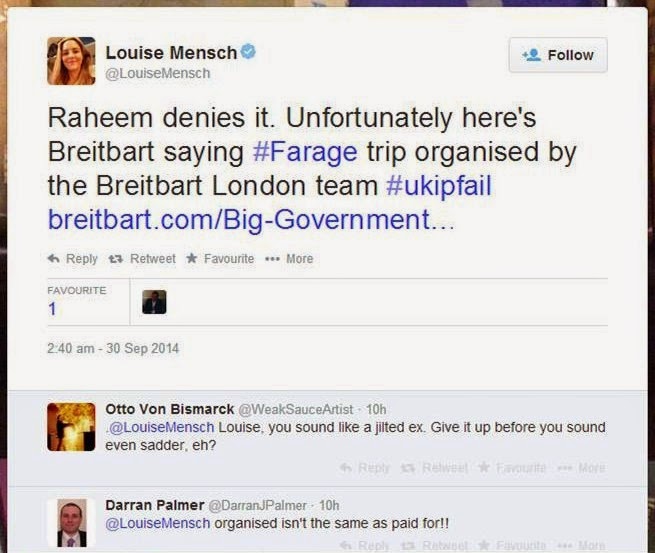 “And by an amazing coincidence, Breitbart London (Raheem Kassam in charge) paid for Farage’s trip to America where [the] Tea Party [interviewed] him” she trilled, despite that not being true. So she cited a post which did not prove that it was: “Raheem denies it. Unfortunately here’s Breitbart saying the Farage trip organised by the Breitbart London team”. Organised is not the same as paid. Ho hum. 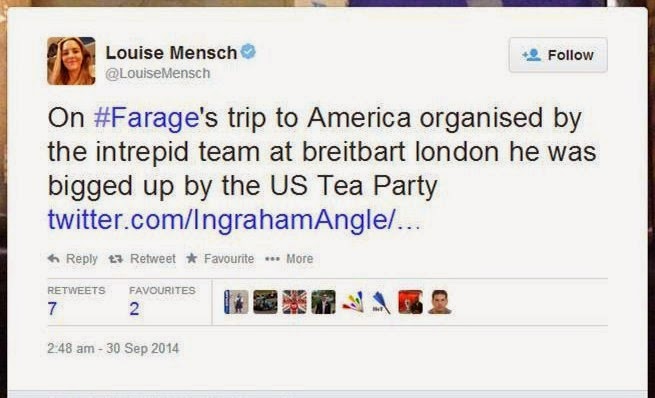 Then comes a most unfortunate intervention: “On Farage’s trip to America organised by the intrepid team at Breitbart London he was bigged up by the US Tea Party ... Laura Ingraham, Tea Party radio stalwart, has been trying her best to get America interested in Breitbart’s ‘Euro Tea Party’”. Ms Ingraham is also a host at Fox News Channel (fair and balanced my arse). Interview there went badly, then, Louise? 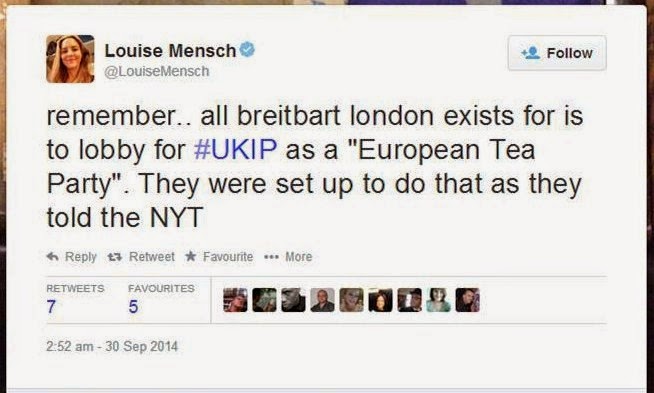 Next is the accusation of bias (pot, kettle, eh Ms M?): “you wonder why Breitbart never reports on Farage’s drunk binges, or being chased out [of] Rochester ... all Breitbart London exists for is to lobby for UKIP as a ‘European Tea Party’”. And, as Jon Stewart might have said, two things here. Mr Thirsty was not chased out of anywhere, and Breitbart London does rather more than shill for UKIP. 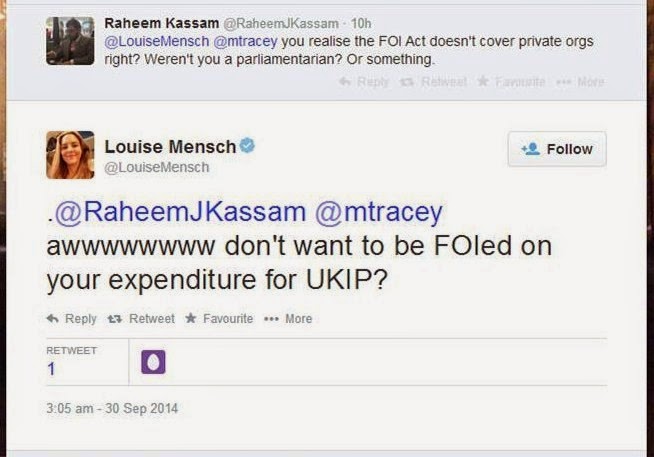 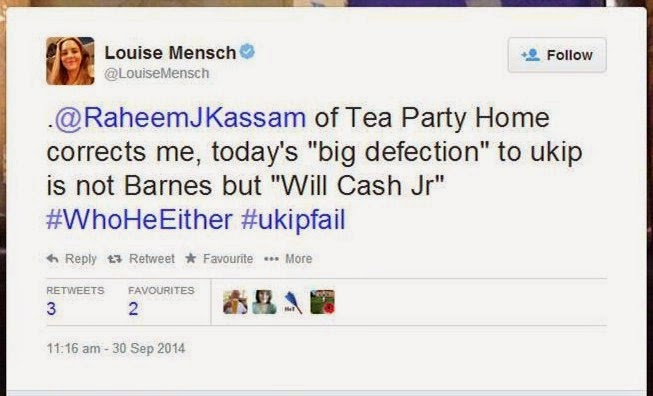 At this point, Ms Mensch abandoned all pretence of reality and engaged wibble overdrive, taunting Kassam with “don’t want to be FOI’d on your expenditure for UKIP?” which is not possible, as a former MP might be expected to know. The taunting continued with “today’s big defection to UKIP is not [Richard] Barnes but ‘Will Cash Jr’”. One son of a sitting MP not following party tradition. 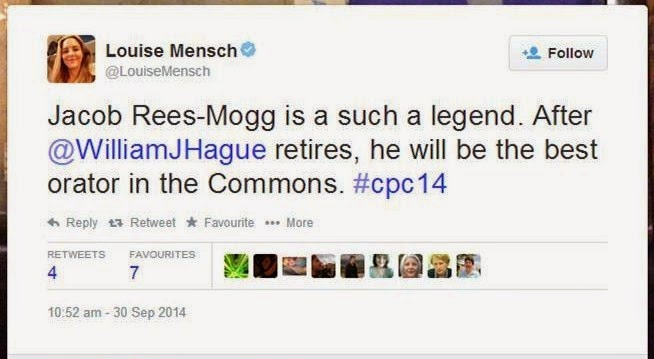 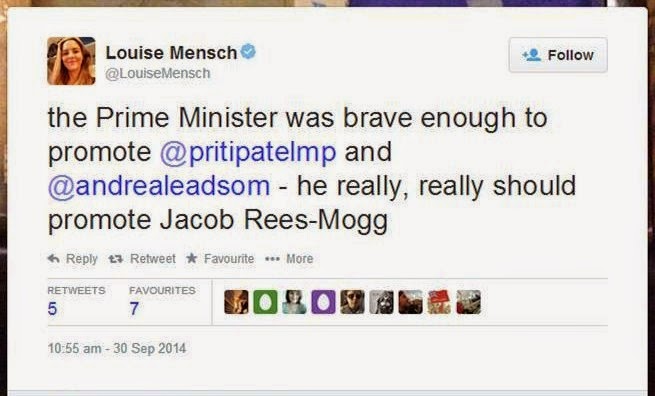 The surreal mood was maintained: “Jacob Rees-Mogg is such a legend. After [William ‘Ague] retires, he will be the best orator in the Commons [big deal] ... the Prime Minister was brave enough to promote [Priti Patel] and [Andrea Leadsom] – he really, really should promote Jacob Rees-Mogg”. In Ms Patel’s case, the right word is not “brave” but “desperate”. That’s just tribalism gone mad.

Ms Mensch almost makes one feel sorry for Kassam. One heck of an achievement.
Posted by Tim Fenton at 13:03

The popcorn industry would crash if Twitter dropped Mensch.

And it gets worse for La Mensch or UberMenschkinTroll, after complaining of Nick Davies's partisanship propaganda in "Hack Attack", as Alan Rusbridger tweets today 2nd Oct:

"How accurate was @Bynickdavies on phone-hacking? Even top NewsCorp brass admit: 95% - @kenauletta"

She seems to be coming unstuck in her day job too - any suggestions as to where she should go next?

Now, now, I thought that was going to be too easy.