The inmates at Northcliffe House are not happy bunnies this weekend: the hacks at the Mail On Sunday (MoS) responsible for following the story of former MP Chris Huhne and the speeding points he managed to bodyswerve have found that the rozzers used the Regulation of Investigatory Powers Act (Ripa) to force the disclosure of their phone records. 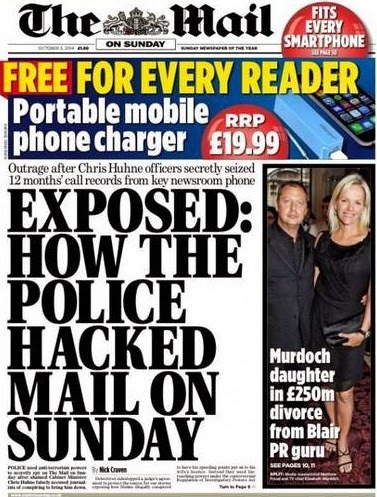 So it should surprise nobody to see the MoS’ headline today: “Outrage after Chris Huhne officers secretly seized 12 months’ call records from key newsroom phone ... Exposed: How The Police Hacked Mail On Sunday”. OK, it’s a bit of a stretch to say it was hacking – or even tapping – but the intrusiveness of the action is obvious. The impression of establishment overreach is all too clear.

Readers were told: “Detectives sidestepped a judge’s agreement to protect the source for our stories exposing how Huhne illegally conspired to have his speeding points put on to his wife’s licence. Instead they used far-reaching powers under the controversial Regulation of Investigatory Powers Act (RIPA) – originally intended to safeguard national security – to hack MoS phone records and identify the source”.

An editorial, titled “The Police are not fit to have these powers” (protested against them at the time? Thought not), reinforces the piece: “In these dangerous times we have reluctantly to allow more surveillance than we would wish. But the law was not intended to allow police secretly to obtain the phone records of a Mail on Sunday journalist engaged in a legitimate inquiry, and so discover the names of his confidential sources. A free press cannot function without such confidentiality”.

So what recourse does the MoS have? Well, happily, there is an act that may help, and which contains this provision: “Everyone has the right to respect for his private and family life, his home and his correspondence ... There shall be no interference by a public authority with the exercise of this right except such as is in accordance with the law and is necessary in a democratic society in the interests of national security, public safety or the economic well-being of the country, for the prevention of disorder or crime, for the protection of health or morals, or for the protection of the rights and freedoms of others”. 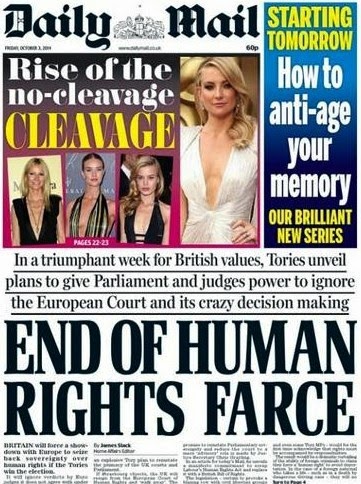 However, and here we encounter a significantly sized however, this is Article 8 of the 1998 Human Rights Act, and, while it may be the MoS’ next port of legal call, there is the teensy problem that its daily sister paper last Friday was jubilantly telling readers that the very same act would be repealed by a future Tory Government.

Then, human rights were a “farce”, and to repeal the act capped a “Triumphant week for British values”. Now, there is “outrage” at law enforcement agencies apparently riding roughshod over them. Perhaps the Mail titles can tell their readers which way they would like to face. Human rights are for everyone – even the Mail.

[UPDATE1 6 October 1030 hours: this morning, the Mail has been joined by the Murdoch Sun, which, let's not forget, was cheering "Rights Act In The Bin" last Friday. 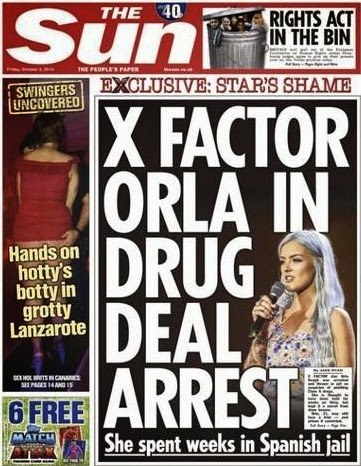 But now, accompanied by the instantly recognisable mugshot of non-bullying political editor Tom Newton Dunn, everything is so different. 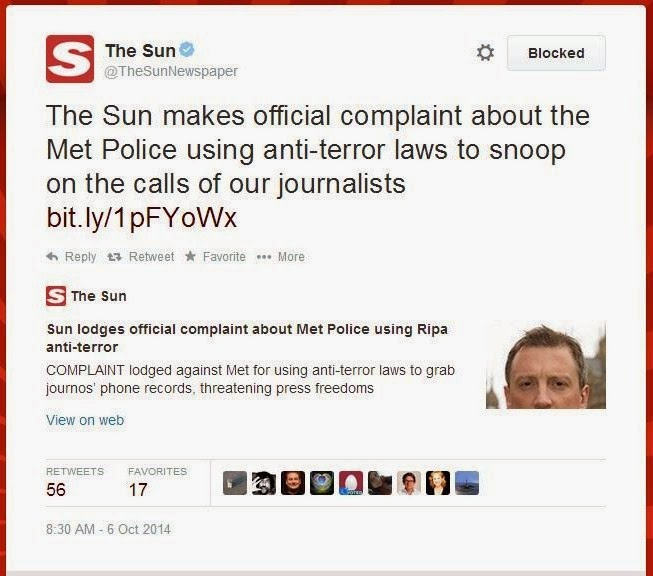 "The Sun makes official complaint about the Met Police using anti-terror laws to snoop on the calls of our journalists" it protests.

So that's another invocation of the Human Rights Act, Article 8, then. The Sun has also belatedly realised that human rights are for everyone. Even Sun hacks]

[UPDATE2 6 October 1810 hours: it has now been confirmed by the HuffPo that the Sun will cite the HRA. A spokesman said "The Sun is using the Human Rights Act in our submission to the Investigative Powers Tribunal".

The article noted "The paper did not state which part of the HRA it would use, though it would likely be Article Eight, which protects the right to privacy". Yes, Article 8, as I suggested earlier.

And, guess what? "Ironically, The Sun's stories about the abolition of the HRA were written by Mr Newton Dunn, whose phone records were seized by the Met".

Tom Newton Dunn rejoices in the binning of the HRA. Then he and his pals need it. Ironic indeed]
Posted by Tim Fenton at 14:25

I can never understand why Ripa gets so much stick. The operative word is "regulation" and the act imposes controls on what the authorities were already doing.
A few years ago I had a very odd letter from someone purporting to be an accountant. So odd that I checked out his address during my lunch hour. It belonged to the local authority's Day Centre, and his "clients" were other attendees. After Ripa, that would have needed official permission.

Kind of like John Gaunt: going on about Liberty and Shami Chakrabarti on his radio programme ("Human Rights" had gone too far) and then using them to help in his case over his dismissal from Talk Sport: someone else discovering that Human Rights means rights for everyone, not just foreigners and criminals.