Rupe’s downmarket troops at the Super Soaraway Currant Bun rely on a number of hate figures in order to promote their editorial agenda: the EU is one, migrants are another. And the Sun loves to denigrate politicians, even the Tories who have counted on the paper’s recent support. All of this has had one result, and the realisation that the result is UKIP is not going down well with them.

But what can the Sun do? It played for exactly the kind of thing Nigel “Thirsty” Farage and his fellow saloon bar propper-uppers represent – intolerance of anyone talking foreign, resentment of anything remotely connected to “Brussels”, any suggestion of joining the hated Eurozone – and now the panic is setting in. The subsequent exhibition of headless chickens has been a joy to behold. 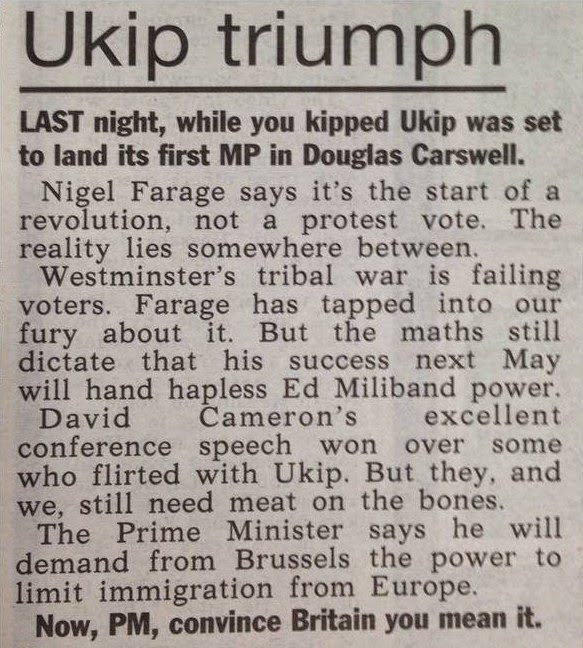 Part of this joy has been the latest editorial: “Westminster’s tribal war is failing voters. Nigel Farage has tapped into our fury about it. But the maths still dictates that his success next May will hand hapless Ed Miliband power. David Cameron’s excellent conference speech won over some who flirted with UKIP. But they, and we, still need meat on the bones. The Prime Minister says he will demand from Brussels the power to limit immigration from Europe. Now, PM, convince Britain you mean it”. 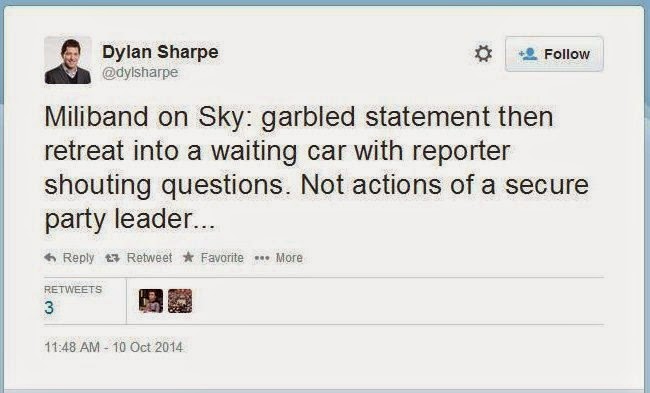 And to that I call bullshit: Young Dave ain’t going anywhere in his effort to limit free movement – not with a million Brits in Spain using their health service and in many cases turning areas of the south of the country into Anglophone ghettos. So what can the Sun do? Of course – it can smear Mil The Younger! 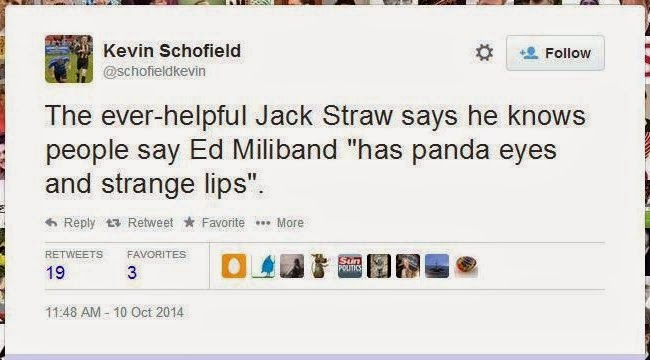 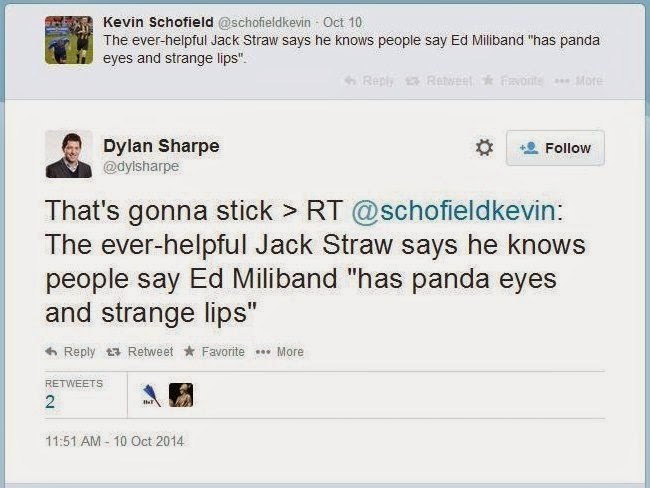 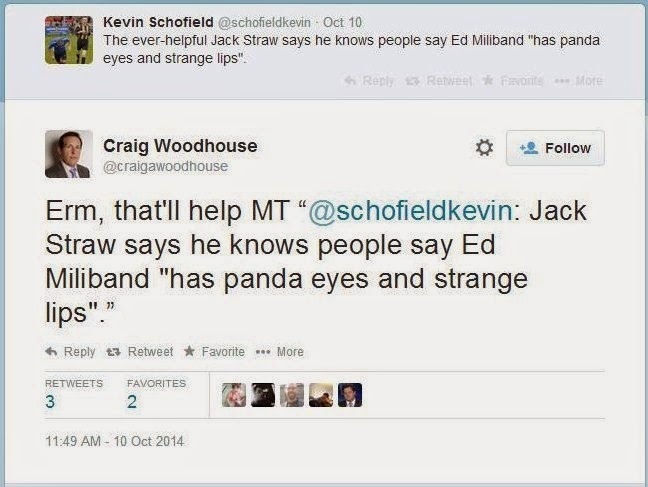 Sharpe now found this line of attack much more to his taste: “That’s gonna stick”. Fellow Sun hack Craig Woodhouse was in no doubt: “Err, that’ll help”. Thus the Murdoch faithful reassure themselves that all will be well: all they need to do to get the readers to put their crosses in the Blue Team’s box is to talk up Cameron and smear Miliband with panda jibes. But there is a teensy problem here. 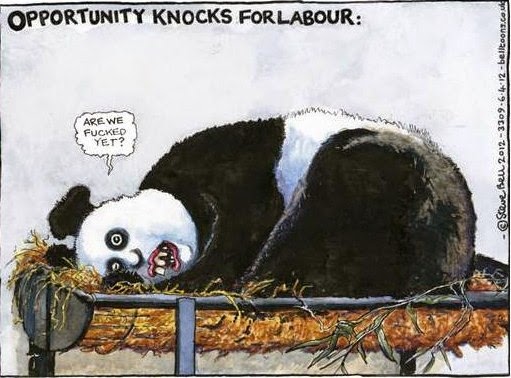 The Guardian’s Steve Bell, not known as a rabid right-winger, has been caricaturing Miliband as a panda for years, as can be seen from the cartoon shown in this post. Bell is far more upfront than the panicking Murdoch doggies at the Sun, and it hasn’t done much to dent Mil The Younger’s standing. The Sun is getting desperate: it is partly responsible for the rise of UKIP. And now it can’t control the beast.

Be careful what you wish for, Murdoch faithful. You might just get it.

[UPDATE 1800 hours: the Sun may be behind a paywall, but copies of the relevant bits do tend to get emailed and otherwise sent in my general direction (see how that works, Rupe?).

And the latest Sun editorial is as full of panic as its predecessor. 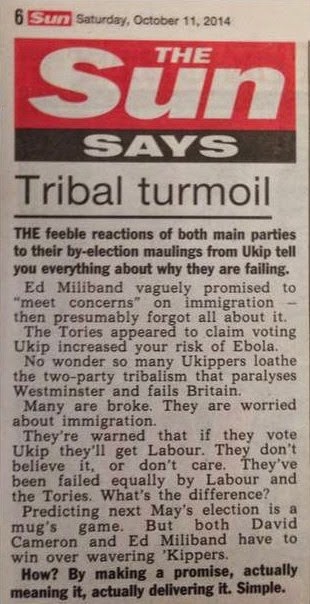 Under the heading "Tribal turmoil", readers are reminded that both Labour and Tories suffered "maulings" from UKIP, except somehow only the Tories lost. But there is no escaping the message on the "two party tribalism that paralyses Westminster and fails Britain".

That would be the kind of tribalism the Sun has been encouraging for, oh I dunno, around the time that Murdoch has owned it, so that's 40-odd years. But their message is stark: "both David Cameron and Ed Miliband have to win over wavering Kippers".

Yes, because the Sun is now so shit scared that Mr Thirsty and his pals may end up in power, despite having encouraged the kind of hatred and bigotry that has propelled UKIP forward so rapidly.

You weren't careful, Sun pundits, and now you're ending up with what you wished for. Your problem, not the electorate's. Deal with it]
Posted by Tim Fenton at 13:37

The panda thing has to be one of the most desperate things yet, because speaking for at least a part (not all) of the female voting population? The panda eyes are what a lot of women of my acquaintance find *attractive* about Ed Miliband.
If that seems improbable, check out the interviews he did in women's mags such as Grazia or Red, or even the puff piece he did with his young family for one of the tabloids. The same thing is mentioned again and again - some women find those dark, soulful eyes attractive.
Quote: http://edmilibum.tumblr.com/post/96350203257/the-charisma-of-imperfection

I seem to remember my own, usually sensible, mother making a comment to that effect when that anecdote about the female members of the PLP clubbing together to buy him a stick of YSL Touche Eclat was going about. (Again, that may have been a joke gift but it doesn't seem like the actions of MPs who hate their leader to me.)

So somehow, I doubt drawing attention to the panda thing will work. People like it, at least more than they like the Wallace comparisons. Own goal, methinks.
(as for the lips, though... do you find that a bit... iffy? I'm not saying anti-semitism for sure, but when you consider that at rest, objectively, it's miliband's teeth that are big, not his lips, why it feels a little forced, and dogwhistly? Just me?)

That's a devastating indictment of their pal Osborne isn't it?

Interesting to see them trash that so comprehensively in their panic over the bastard child political party UKIP they're responsible for.

The Tory press is in a tailspin.