A fire late last weekend at Didcot B Power Station required the attendance of 25 fire engines and a hundred firefighters; one of the two units at the plant has subsequently been placed out of action “indefinitely”. This has sent the media into Corporal Jones mode, telling readers and viewers that the light are going to go out, and then telling them not to panic, while panicking themselves. 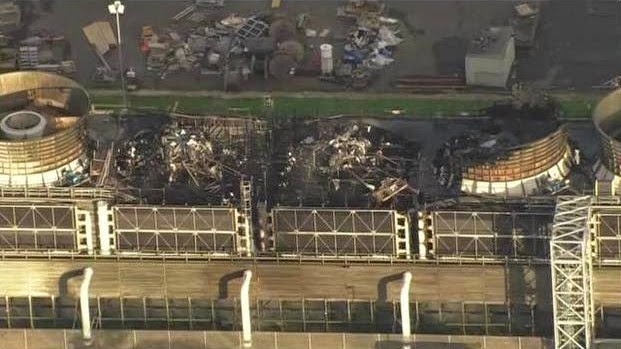 There was, as Captain Blackadder might have observed, only one thing wrong with the idea that half of Didcot B being down will bring power blackouts – it was bollocks. The plant operator stressed “We have a very resilient network in the UK and the way the National Grid can operate, they are able to call upon other power stations across the country to fill the gap that this power station has left as it's come off”.

That has not stopped the usual hyperbole, with the Mail telling “The devastating blaze at the Didcot B site in Oxfordshire comes days before National Grid sets out its winter outlook, amid worries over how it will keep the lights on if there is an 'energy crunch'. It is expected to put further pressure on the UK's squeezed electricity network and could result in supply failing to keep up with demand”.

Yeah, right. But even the usually sober Guardian caught blackout fever: “The government has attempted to quell blackout fears this winter after a fire shut down half the capacity at a power station in Oxfordshire ... But National Grid said the longer-term effect on supply was difficult to judge and that its annual winter outlook report, published next week, would take account of Didcot’s reduced capacity”.

So what’s the reality? Didcot B has a total generating capacity of 1.36GW, with 680MW of that off-line for the immediate future. To put that in perspective, right now (I’m typing this at 1640 hours) wind power – yes, those allegedly useless windmills – is generating 5.65GW, and with it just under 15% of the UK’s power needs. And wind has been posting those kinds of numbers since late last Friday.

Moreover, Coal and Gas output can reach a total of 40GW with ease, but at that same time, were generating 13.44GW and 11.3GW respectively – so there is lots of spare capacity. The only potential problem is with nuclear, where the usual 7GW or so is down at less than 4.5GW, although it’s not needed right now. Yes, colder weather and longer nights will raise demand – but the system has plenty in hand.

On top of that, the Grid can switch in as much as 2GW from pump storage at peak times, as well as draw around 2GW through the French interconnector. It will not have escaped attention that all of these numbers are significantly larger than the loss of less than 1GW from the closure of one unit at Didcot B.

The lights are not going out any time soon. It’s another example of not believing the scare stories in the papers, and sticking to the facts. Boring but true.
Posted by Tim Fenton at 17:21

I am generally in agreement with you that the chances are that there will not be electricity shortages in the near future. However, the odds of there being a shortage are, in the opinions of many - including OFGEM - too high. (1)

This is where the media goes wrong in their quest for headlines: they confuse warnings of risks of something happening with it actually happening. A staid: "The chances of event A has increased from 1 in 200 to 1 in 190" becomes "OMG! event A may/will happen!"

You also take wind generation over the last few days and seem to say that everything is fine because of it. However, it would have been easy to take a similar period and show where little wind power was generated. Worse, such periods tend to happen during winter, when demand is greatest. (2).

There is also the issue of pump-storage. Whilst useful, it is very limited in capacity (and in future expansion as well), and in the period it can run for (in the case of Dinorwig, 1.7 GW for just six hours). It is useful, but not a solution.

The French interconnector is also in use at this very moment at 1GW, leaving only an extra 1GW available (if the French have it available).

This is leaving aside the issue of wind power's favoured status when it comes to generation increasing costs for the coal/gas/nuclear baseload stations and making them more economically marginal.

Currently, you have many coal and gas plants in a standby state, ready to run when wind generation decreases. Whilst there have always been standby stations (often old ones near their end-of-life), the number needed to cope with low wind power generation are much greater.

These plants cost a massive amount to maintain, yet when not running earn the operators no income. How long can operators be expected to keep them in standby status, and what are the costs to consumers and industry of the government paying for them to be in standby?

I like wind power (especially offshore). But it has problems that its proponents should not ignore. As the amount of wind power generative capacity increases, so does the risk of it unsettling the balance of generation, increasing the risks of blackouts and the cost to consumers and industry.

We need to find a solution to the problems of storing energy, whether that is by means of a limited increase to pump storage, heat, compressed gasses or flywheels. Until then, there is a practical limit to the amount of wind energy the grid can withstand.

We have to hope that a hard winter such as 1962/3 does not occur again. If it does, then energy generation, as well as the NHS, will be under severe strain.