The Super Soaraway Currant Bun began one of its occasional attempts to take the high moral ground on Wednesday when it roped in a motley convocation of the vain and gullible to supposedly stand “United Against IS”. Thus they would demonstrate that the Murdoch press was “standing up to extremists”, and not merely trying to score More And Bigger Sales Figures For Themselves Personally Now. 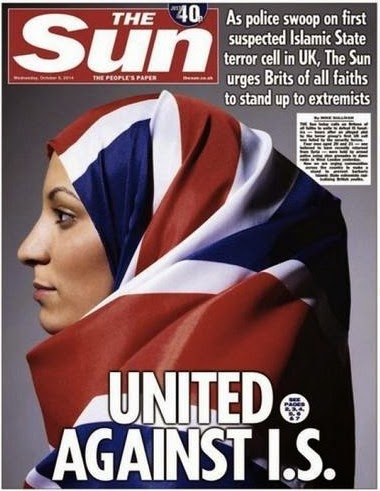 However, and here we encounter a significantly sized however, the campaign was because “Police swoop on first suspected Islamic State terror cell in [the] UK”. As the Guardian warned that same day, “However, some past high-profile terror arrests have been based on intelligence that turned out to be inaccurate, and have led to accusations that police and MI5 have ramped up the nature of possible plots”.

But Rupe’s downmarket troops cared nothing for purveyors of proper investigative journalism, and yesterday they doubled down, with a front page telling “As Sun’s Anti-IS Campaign Takes Off, Terror Suspect’s Tweet Is Revealed ... Oi Lads! I Smell War”. Well, if that’s all the Met and MI5 have got in the locker, they are in serious shit right now. Not all media outlets are so certain of the Tweet’s meaning. 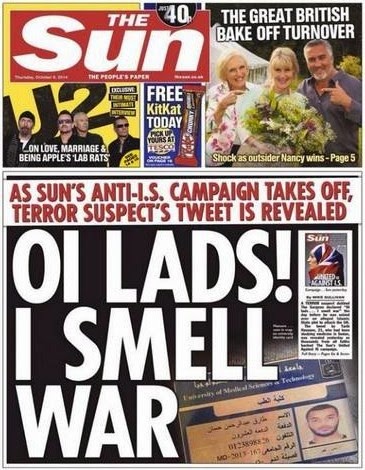 Even the Mail admitted “Friends of [Tarik] Hassane, whose Moroccan mother works at a school, have defended him after it emerged he wrote ‘I smell war’ on Twitter just hours before he was arrested. Launching a ‘Justice for Tarik’ campaign, many said it simply referred to a ‘bunch of rowdy girls’ who were bickering on the social networking site”. Hardly worth a Sun front page, is it, Mr Abell?

Over at Channel 4 News, the story was that “Hassane had been studying medicine at the University of Medical Sciences and Technology in Khartoum, Sudan, and commenced his studies there in September 2013 according to his tweets ... It is unclear if he has been in Syria”. Bit of a long haul from Khartoum to Syria. And the idea that the “plot” features someone returning from Syria is key to its credibility. 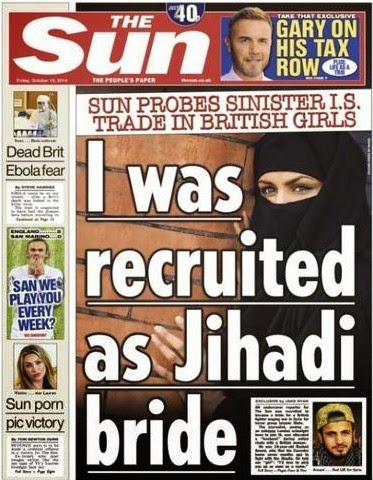 Indeed, today’s Sun front page suggests the paper is trying to get readers to “look over there” and away from the “suspected Islamic State terror cell”, with “Sun Probes Sinister IS Trade In British Girls ... I Was Recruited As Jihadi Bride”. But what will the hacks do when the five days’ extension of questioning time runs out and the Met have to either convince a magistrate or release Hassane and his pals?

There were suggestions that guns were involved: that has gone quiet. There was supposed to have been a link to Syria: it doesn’t look as if Hassane satisfies that criterion. There was supposed to be a beheading in the planning: no further news has been heard on that, and if a knife had been found, one might expect the news to leak. It’s looking increasingly like the Sun’s campaign was built on sand.

So expect the reason it was started to be quietly forgotten. No change there.
Posted by Tim Fenton at 17:31

If The Sun was serious about investigative reporting (and the rest of the media for that matter) why have they not reported on matters reported in this broadcast?

Too close to home?

Are we too reliant on the US and their corporate cash?

Oh yes, I forgot to add that if there are similarities in the UK to those mentioned in the broadcast regarding drugs and law enforcement agencies in the US it is no wonder that the Daniel Morgan murder was never solved (or at least made public) here.