Kavanagh – A Suitable Case For Treatment

Once upon a time, in the days when there was no Internet, no social media, and therefore much less opportunity for inept and dishonest pundits to get called out for being, shall we say, over-creative with facts, folks would read what they had to say and occasionally believe it. Now, readers know they’re talking out of the backs of their necks, but the autopilot remains firmly engaged. 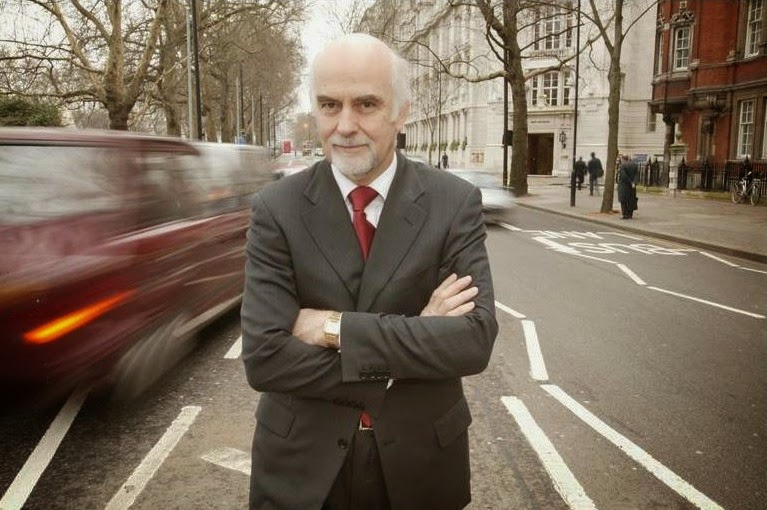 Won't anyone help this poor soul cross the road?

There is no more typical inmate of this museum of sclerotic blether than the Sun’s faithful retainer Trevor Kavanagh, wheeled out once more in a vain attempt to get readers, whatever they do, not to go anywhere near Mil The Younger and his party next May. The Sun is behind a paywall, but a Zelo Street regular has taken a snapshot of Kav’s latest drivelfest (see how that works, Rupe?).

He starts as he means to go on: “One thing is blindingly clear from last week’s by-elections ... nobody wants panda-eyed Ed Miliband as Prime Minister. Even his own party”. Labour is said to be “bitterly divided”, and they should, he asserts, send for Alan Johnson. Trev seems to have missed the fact that the Tories lost the seat they were fighting, and Labour held theirs.

Then he starts talking up UKIP: perhaps the Sun is moving towards the Farage fringe? No chance: this is an attempt to frighten the readers into voting Tory. “Unlike the SDP in the 1980s, the Faragistes are here to stay”. Ho bloody ho. Nigel “Thirsty” Farage can but dream of the poll numbers the SDP/Liberal alliance was posting at the peak of its popularity – over 50%. 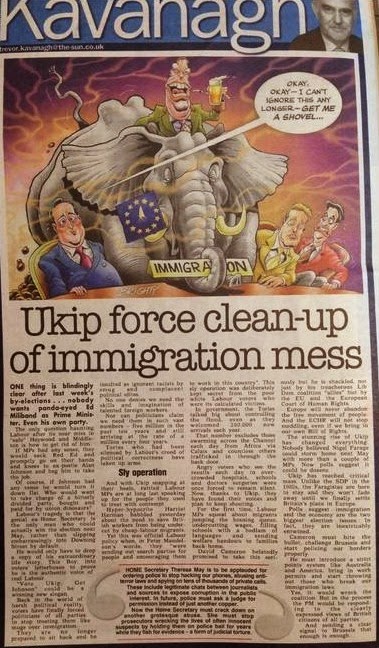 See - the rest wasn't worth reading, either

In any case, it’s all about immigration: “Europe will never abandon the free movement of people”. Eh? This statement is incoherent (no change there), and we are part of the EU, in case Trev hadn’t noticed. Oh hang on, look what’s next: “The ECHR will not stop meddling” (see why this is crap HERE). He talks of “over-crowded hospitals, schools and doctors’ surgeries” as if he understands.

He doesn’t, of course: Kav and his overmonied pals all go private. But they do value their privacy, so he’s keen to applaud one politician: “Home Secretary Theresa May is to be applauded for ordering Police to stop hacking our phones”. This is one of those difficult ones for Trev: they aren’t hacking, and she hasn’t ordered anyone to do anything. But good to see his preferred candidate for the next Tory leader.

Back to those polls that he’s been reading, he concludes “immigration and the economy are the two biggest election issues. In fact, they are inextricably entwined”. Big issues? He should certainly be selling them right now: while Kavanagh prattles on, the poll done for his own paper (that’s the daily YouGov one) shows supposedly “bitterly divided” Labour three points ahead.

Decades past his sell-by date, there goes Trevor Kavanagh, on his way ...out.
Posted by Tim Fenton at 17:25

Get Nick Davies' book about phone hacking. Look up Kavanagh in the index. Go to the first references, pages 214-215. Read.

Davies presents some examples of NoTW and Sun journalists, including Kavanagh, bullying politicians to change their policies.

I haven't seen any comment on these allegations by the people who usually say that this is all a lot of fuss about nothing. Did these incidents happen? Is Davies' interpretation of them wrong? What should we make of the silence about this of the people mentioned?