Young Dave was incandescent with rage: those ghastly foreigners had gone too far this time, with a totally unexpected and unjustified demand for more money. It jolly well wasn’t on, especially as the dastardly Germans and the appalling garlic-crunching French were going to benefit. And, worst of all, it had been sprung on them at the start of the Rochester and Strood by-election campaign. 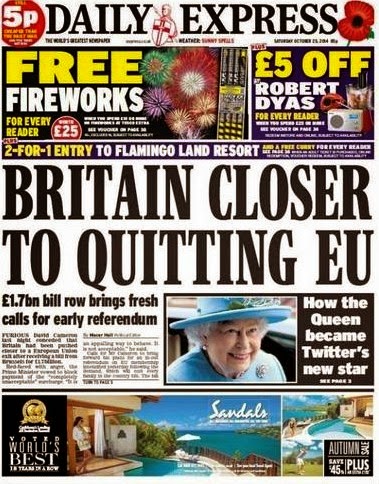 So off went Cameron, and his chum Gideon George Oliver Osborne, heir to the seventeenth Baronet, to Brussels to tell Johnny Foreigner where he jolly well got off (that would be, as usual, the nearest tram stop). And, as Jon Stewart might have said, two things here. The budget adjustment was not unexpected, and there was nothing unjustified about it. But minor points, eh?

Facts are certainly not getting in the way of the routinely rabid anti-EU element in the press, which would be most of it. “Britain Closer To Quitting EU” screams the Express today, which wouldn’t diminish that €2 billion bill. “One Step Nearer To The EU Exit” proclaims the Mail, which suffers from being equally incorrect. But it is the Murdoch Times which makes the daftest accusation. 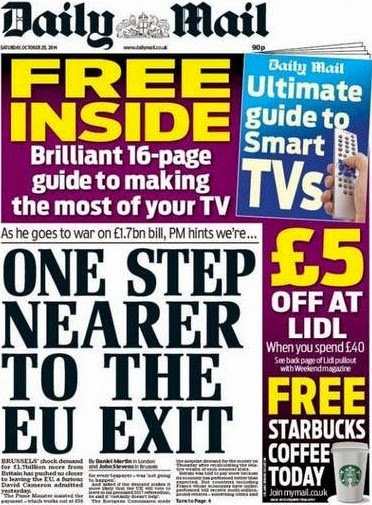 “Cameron defies EU over ‘wealth tax’ as costs spiral” it tells, which would be interesting if true: a budget adjustment, in accordance with the rules under which all member states play, following Dave’s achievement of an overall cut in the future budget, cannot be described as a “spiral”, but then, this is yet another demonstration of how the Times has fallen from its position as a paper of record.

So what is the reality? Well, the news of the budget adjustment was given to Cameron and Osborne not at less than a day’s notice, but the previous week. This is why Dave’s outrage was utterly synthetic – another trait he has inherited from the blessed Tone. And the method of calculating contributions was agreed by all member states – including the UK – despite alternatives being suggested. 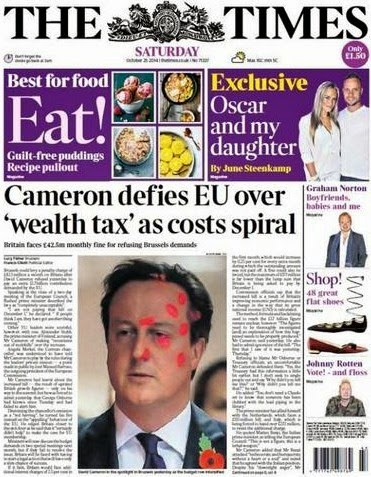 We know this as José Manuel Barroso has authored a statement on behalf of the European Commission which sets all this out. And, on the subject of calculating budget contributions depending on a country’s Gross National Income (GNI), he states the bleeding obvious: “we cannot have a negotiation about the GDP of the different countries”. Cameron is not entitled to his own personal facts.

We agreed to play by these rules. We joined with all other member states to vote down a proposed alternative system. We benefited from the arrangement in 2008. We knew what was coming. We knew the figures the week before the announcement was made. Yet now our brave and principled leaders don’t like it.

One has to ask Cameron and Osborne: what part of those rules, which you have not objected to for the past four years, do you not understand?
Posted by Tim Fenton at 08:56

One could also ask Cameron and Osborne why they wait until now to have their strop - the bill was going to be altered automatically the moment they issued revised GDP figures in May, they should have been working on the defence from then. Perhaps they got so giddy on the news that the country was richer than thought that they forgot about other matters.

I don't get my own way so I'm going to throw all of my toys out of the pram. No one's taking any notice.
He reminded me of my 3 year old granddaughter when she's in a strop.

Surely the Civil Service has been monitoring the measures used to calculate this adjustment on at least a monthly basis. These and the expected cumulative adjustment forecasts that would have been supplied must have been known to the government for quite some time. It is therefore plainly obvious that this issue has been cooked up and cannot have suddenly come as a surprise. This whole affair makes Cameron and the press (who have taken it all in without question) as total idiots.