There was a realisation that, despite the pleas for mercy from the group of thugs at ISIS, or whatever they’re calling themselves this week, Salford taxi driver Alan Henning was as good as dead. It is estimated that he was murdered at least two weeks ago. Even so, when the news came yesterday evening, it was terribly, terribly sad. The subsequent news bulletins reflected that sadness. 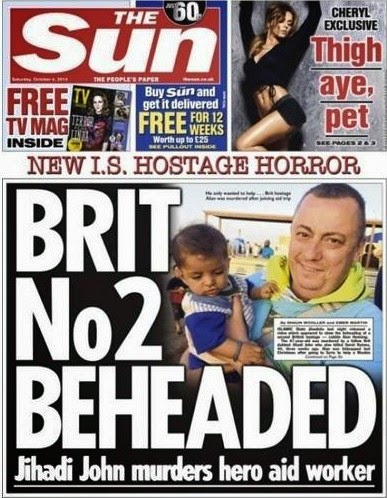 Following behind the broadcasters was the press, and most papers, by this morning, had got Henning on the front page, despite the news not coming through until after 2100 hours yesterday. The reason for this is straightforward: they knew Henning was likely to be already dead, and so had a story ready to go, a plan for what would make way, and just the details to fill in when the news came. 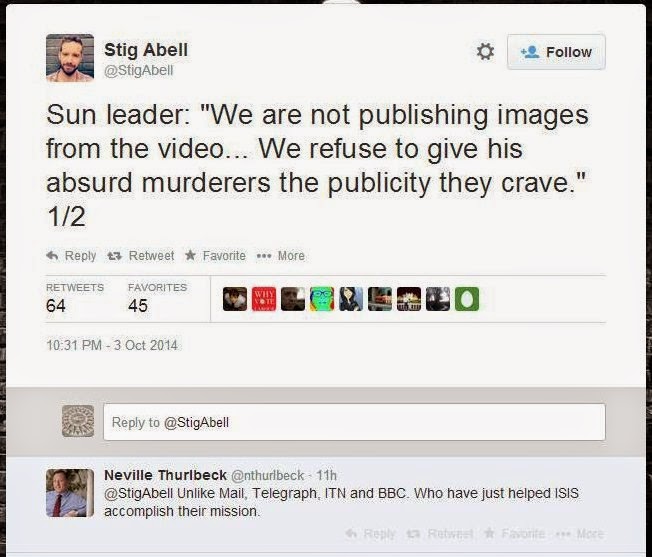 So far, so procedural, but then came the inevitable opportunity for some papers to indulge in self-promotion, yes, self-promotion, even at such a sad moment. Equally guilty of this, and equally hypocritical, were the Sun and Mirror, whose managing editors have demonstrated that there is no level to which they will not sink in order to flog a few more papers. 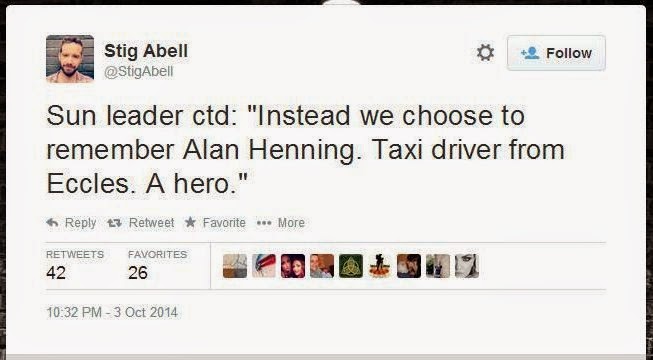 “We are not publishing images from the video” proclaimed the Sun’s Stig Abell, to the evident approval of Neville “stylish masturbator” Thurlbeck, clearly unable to let his former profession go. The Sun leader was proudly shared by Abell, and for once, this ostensibly principled stance was matched by the Mirror, where Lloyd Embley announced that his paper, too, would not show stills from the video. 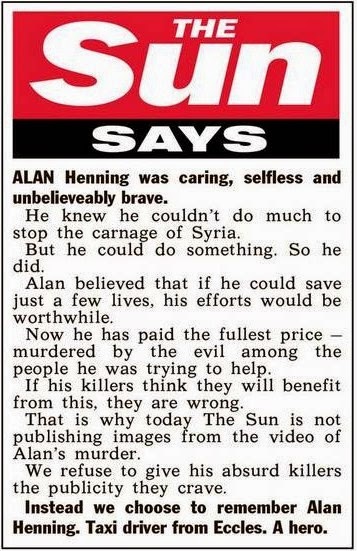 “After David Haines was murdered [pictures] of him on his knees were on all the front pages. We decided not to do that again. They can’t win” told Embley. And to that I call bullshit: there is one straightforward reason that nothing from the video released by ISIS is on any of the front pages today, and that reason has one word. The word is deadlines. I will explain. 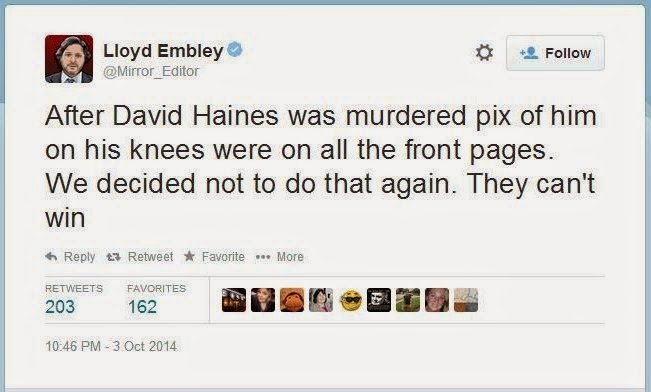 The news that Alan Henning had been killed came through after 2100 hours. By this time, papers would have already been readied for the first editions – remember, they have to be printed, collated, transported and delivered in time to be on the news stand before 0600 hours the next day. Most titles had already run something else on the front page. There was very little time to change things.

As the news emerged, previously readied alternate front pages with the Henning story were substituted, but the ISIS video had to be verified (it still, seemingly, has not been). That is why nobody was tempted to use the video – they were out of time and could not be certain of its content. Abell and Embley are talking out of the backs of their necks. No moral high ground was involved.

Yes, they’re happy to make capital out of an ISIS beheading. Pass the sick bucket.

[UPDATE 1605 hours: to demonstrate that the Sun is being rather too economical with the facts here, we have this snapshot of the paper from three weeks ago, after the last ISIS murder by beheading. 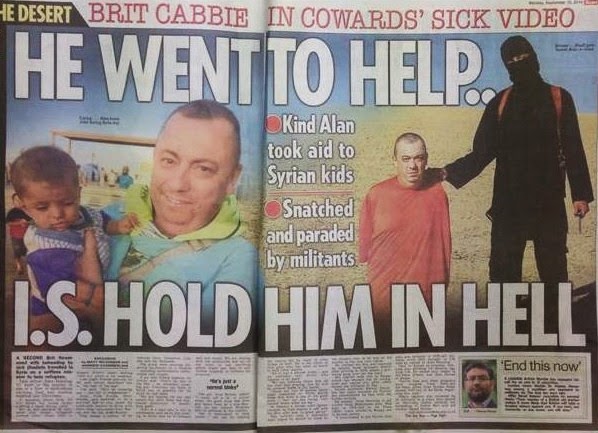 And, as this shows, far from declining to show images from ISIS videos, the Sun already has. Not only did it show Henning with a supposed executioner, but it did so in defiance of a request from his family.

For some reason, Stig Abell has come over all forgetful about that today. So here's a little reminder for him]
Posted by Tim Fenton at 10:37

I'm afraid you don't understand newspaper deadlines or how they're distributed.

I don't work at The Sun but I happen to know they have an "off-stone" first edition deadline after 9pm. In this digital age, changes can easily be made up till about 2am, and later if desired. There are at least three editions and the decision not to publish any pictures of Jihadi John would seem to reflect a change in editorial policy from the red tops, rather than self-promotion, as you suggest.

Compare, for example, the front page of today's Daily Telegraph.

I understand that the ISIS video was still not verified by the time the BBC posted the piece I linked to - ie 0856 hours.

That beats your 0200 marker by some distance.