Is the press free of political bias? Oh, I dunno, do bears crap in the woods? Is Pope Francis an adherent of the Church of Rome? Would you shake hands with Grant “Spiv” Shapps without counting your fingers first? As soon as Young Dave finished his speech to the Tory Party conference yesterday, you knew what today’s front pages would look like. And they have not disappointed.

Without going into the detail of poring over the editorials – after all, I don’t want to find myself inadvertently chucking up my breakfast – it is not difficult to see that our free and fearless Fourth Estate is biased so far to the right that it is balancing on the edge of reality. Facts are being bent rather more than sinews as readers are fed weapons grade propaganda in order to get them in line behind The Blue Team. 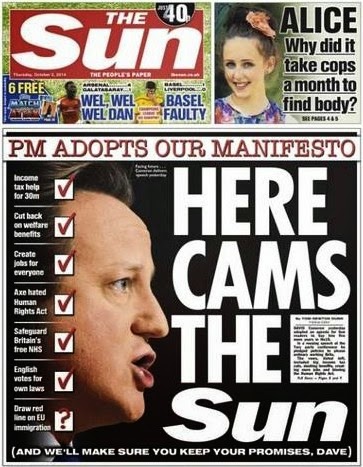 First to require administration of the sick bucket is the Super Soaraway Currant Bun, telling “PM Adopts Our Manifesto ... Here Cams The Sun”. So that’s a straight-A f*** right off, then. At least Rupe’s downmarket troops have figured out that, despite Cameron’s appeal to the voters’ trust, there isn’t a snowball in hell’s chance of his ending free movement of labour anywhere within the EU. 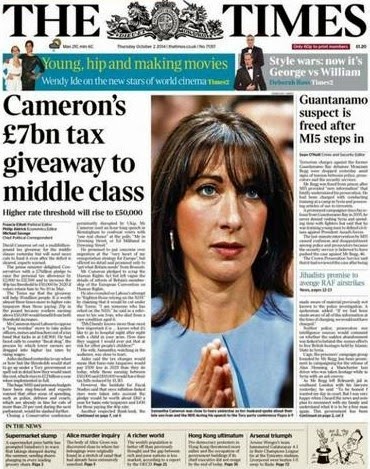 Elsewhere in the Murdoch empire, the Times proclaims “Cameron’s £7bn tax giveaway to middle class”, which is equally untrue, as this is something that might happen some years in the future. Also featured is Samantha Cameron, who has done the proper thing and taken her husband’s name, not like those namby-pamby metropolitan liberal oiks who lead Labour and the Lib Dems. 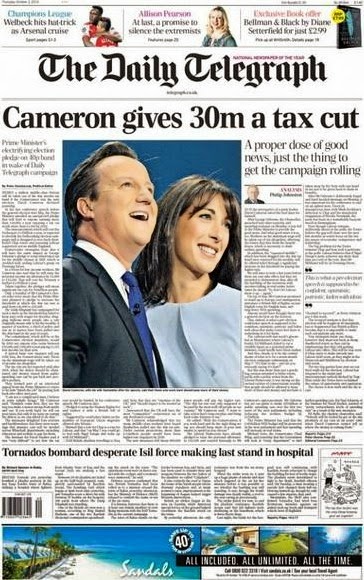 The tax dishonesty theme is maintained by the Maily Telegraph, telling readers “Cameron gives 30m a tax cut”, backed up by the assertion “A proper dose of good news, just the thing to get the campaign rolling”. Jam not tomorrow, but possibly in 2018, provided we don’t have to shell out for, oh I dunno, more sodding wars. But the Tel is right on one count: the General Election campaign starts here. 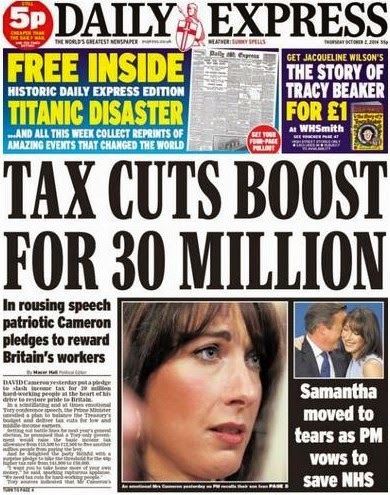 Even the Express, yes, the Daily UKIP, is on-side for once: “Tax Cuts Boost For 30 Million ... In rousing speech, patriotic [!] Cameron pledges to reward Britain’s workers ... Samantha moved to tears as PM vows to save NHS”. How come the NHS needs saving? Whoops, we’re not supposed to ask that one! 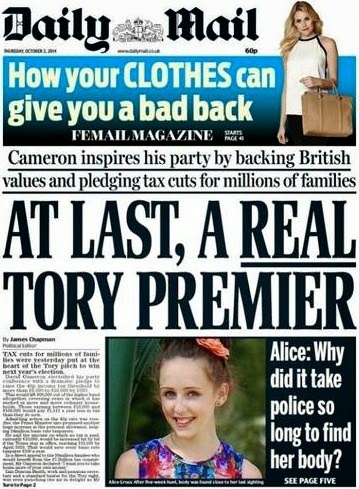 And for sheer tub-thumping bravado, the Mail takes the biscuit: “Cameron inspires his party by backing British values and pledging tax cuts for millions of families ... At Last, A Real Tory Premier”. Yes, do as you’re told this time, Daily Mail readers, and support the party nominated by your legendarily foul mouthed editor.

That there are tens of millions of those hard-working ordinary people out there who have seen living standards fall, and for whom jam some years later than tomorrow may not cut the mustard, is ignored. No change there, then.
Posted by Tim Fenton at 10:30

The truly nauseating part was invoking the death of his son - not for the first time - in an attempt to deflect criticism. Not the first time he's pulled this stunt.

The Mail's heart is bleeding about the poor sods sucked or dragged into the 40% tax band. Even though there is nothing stopping them from looking for a lower paid job.

I find they way the Tories and the mainstream media characterise the top 15% of earners (those hit by the 40p tax band) as 'middle income' telling. A reasoned and objective assessment would set 'middle income' between the 45-55th percentile (or 40-60th percentile at a stretch). Clearly we are dealing with a disconnected political and media class, either that or their being wilfully misleading and characterising the situation to suit their own ends. If Westminster won't accept a pay cut and a change of location, perhaps Fleet-street should, for the good of the country (and to cut Dacre's obscene pay packet to one more in keeping with his merit – the first year apprentices rate for 16 year olds should do nicely).