The constant shuffling of deck-chairs on the deck of the SS Telegraph Titanic has seen the deployment of lots of buzzwords, and the throwing overboard of many hacks and pundits, but one part of the paper’s online world, the bear pit that is Telegraph blogs, has carried on more or less as before, despite the departure of former editor Damian Thompson. 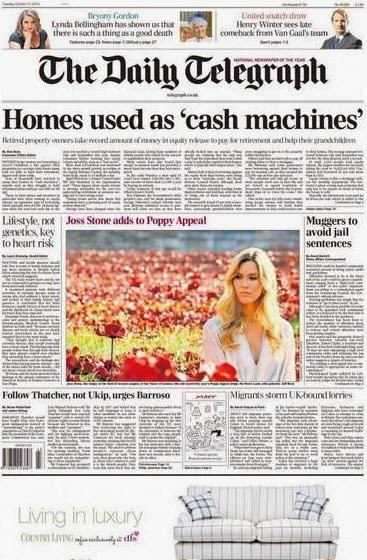 Something else being used as a cash machine, eh, Tel people?

Not any more: for a group blog that can (or perhaps that should read could) call upon the services of so many eager contributors, the offering has just topped a miserable week where the number of new posts failed to rise above six in any one day. It gets worse: over the past weekend, no new content was posted at all. Not a single post. Zero. Zilch. Nil. Nada. Bugger all.

Count them up: last Tuesday, there were just four posts. This improved to six the following day, but slumped to a mere three on Thursday. Friday brought us six more, although one of those was Peter Oborne taking the long e-handle to the appalling Craig Oliver. Then, after a lost weekend, yesterday brought a solitary post from Dan, Dan The Oratory Man, on his travels in Europe.

Has the Tel given up on Telegraph blogs? Some of the formerly regular contributors have been posting little this month: the loathsome Toby Young has featured just twice, Cristina Odone once, and Brendan O’Neill, a useful clickbait generator, has not posted since early September. Andrew “transcription error” Gilligan has not been seen since July. Small wonder Dan Hodges (10 October posts) stands out.

Who has been sitting in the editor’s chair since Thompson left, in what he claims was an amicable parting? The Tel is supposed to be all about “content” nowadays, but there is precious little of the new stuff in evidence at Telegraph blogs: so far today there have been no posts at all. How do Jason “Psycho” Seiken and the rest of the New Tel World Order expect to generate all those clicks?

Tel blogs gives every appearance of following the Mail Online’s Right Minds blogs, which launched amid great fanfare under the editorship of Simon “Enoch was right” Heffer, only to soon be allowed to wither on the vine. Today, Right Minds exists mainly as a category to denote opinion pieces that appear in the Mail print titles. Perhaps Tel blogs is being killed off. Most likely is trying to “monetise” content.

So come on, Telegraph people, what’s the plan? Do you expect readers to pay for the same content instead? Strange that, with so many right-wing voices out there, the two papers that have tried to harness them for their own group blogs seem to have failed, while the Guardian’s Comment Is Free sails serenely on, and there appears to be no shortage of takers at the HuffPo.

Pay for it or leave it? You’ll find, Tel people, that readers will leave it, thanks.

[UPDATE 1810 hours: the inactivity at Tel blogs may not be unconnected to the latest round of job cuts at the paper, which, it has been estimated, will mean 55 people being sent down the road in the very near future. Roy Greenslade has noted that Telegraph management have been shy to put a figure on the number who will be leaving.

Meanwhile, today's first Tel blogs post has appeared - one post, and it didn't appear until well into the afternoon. Someone there has to either populate the area with more content PDQ, see it wither on the vine, or admit that it's dead - as pronounced right here.

Right now Zelo Street has posted more content in the past week than Telegraph blogs. And this is a solo effort. Do something, Tel people - or see your click sources diminish]
Posted by Tim Fenton at 13:02

Gonna miss Toby's mad rants on education matters.He encapsulated the precise mindset that "Oiky" was pitching to with his sell of schools to his mates policy. It was shameless dishonest bullshit which, in spite of the fact that kid's education being pitched at people who read such a clown is a serious matter, was bloody funny and the comments threads were a hoot.