Yesterday’s rant by Nigel “Thirsty” Farage, when he told that he couldn’t make out English speaking voices on a train journey from London out into Kent until after departure from Grove Park, reminded me of an evening in November 2006 when I was waiting for a train at Entrecampos – it’s a northern suburb of Lisbon – which would take me south to the Algarve. 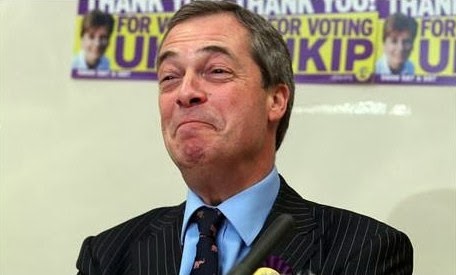 Despite it being the middle of the rush hour, all around were English speaking voices. How come? The next train was that Algarve bound one, and waiting with me were several Brits who had spent the day shopping. The Lisboetas waiting for the next Fertagus service across The Bridge into the southern suburbs showed no sign of concern, and they would not had it been a group of French or Germans.

You can experience something similar when travelling out of Alicante on the tram-train that serves the coastal strip north-east to Benidorm: most of those travelling will be English or German speaking. Most of the rest will speak Valenciano. Very few will speak what we call Spanish. None of them will be the slightest bit fussed about what language the others may choose to speak.

So these are not places in England; this is true. But in parts of Crewe I can hear Polish and other east European voices, and this too is not a problem. It is merely people communicating with one another in a way in which both are comfortable. What they choose to say to one another is not my concern. That last is why Farage sounds vaguely paranoid finding fault with it.

Take this snippet from his speech: “in many parts of England you don't hear English spoken any more. This is not the kind of community we want to leave to our children and grandchildren”. One wonders where he wants to have English spoken where it is not. It’s a re-run of the “They all spoke Welsh in the pub we visited on holiday in Wales so we wouldn’t know what they were saying about us” rubbish.

But then, this is the leader of the party that pretends that lots of people speaking foreign are out to get us, and that the dastardly EU is forcing us all to eat food that actually tastes of something, while ignoring the inconvenient fact that English has become the de facto main language of the Community. Check that out when you make those rail journeys in Germany, Spain or Italy.

Look at the English translation on the newest signage. Then look at all the areas of Spain, Portugal, France and Italy where English has been effectively imposed by sheer weight of the numbers of expats, or maybe that should be migrants. This is what not just the EU, but the whole of the modern, interconnected world looks like. Whining about hearing foreign voices on the train is so Little Englander.

And if that’s what voting UKIP means, nobody should go anywhere near it.
Posted by Tim Fenton at 10:50

I prefer to be on a train where I cannot understand what other passengers are saying.

He should check his ancestry - Belgian I think. I believe his wife is German. Could they not be classed as immigrants?

"Ridiculous" is the word that springs to mind.

Go on any Merseyrail train and you'll be hard pressed to find anyone speaking recognisable English. Does UKIP have some hidden agenda for Scousers....???