Nothing is forever, and certainly not in the world of money. The banknotes, and coins, that we use in our everyday lives change in size and style over time. This is in the category of the stuff that happens. It is not of great concern to most people. But, for the legendarily foul mouthed Paul Dacre and his obedient hackery at the Daily Mail, change of this kind is the worst horror imaginable. 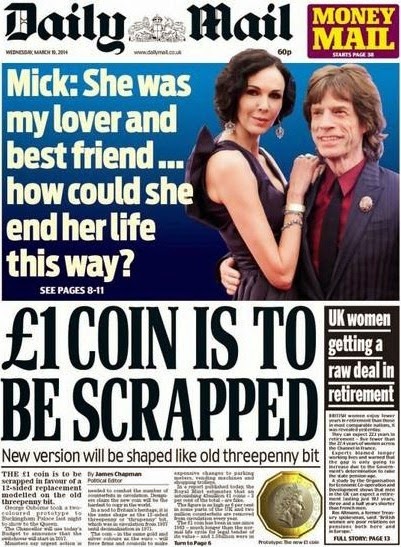 So it is with the news that the pound coin is to have a new design and shape: “£1 Coin Is To Be Scrapped” thunders today’s front page lead, continuing “New version will be shaped like old threepenny bit”, thus demonstrating that the Mail’s target demographic remembers the time before February 1971 – the date that the UK went over to decimal coinage.

Why is this such a big deal? The pound coin has been around for decades – not for nothing did Guardian cartoonist Steve Bell christen it the “Brass Margaret”, after Mrs T – and a new design was probably overdue. Since its introduction, the 5p and 10p coins have shrunk in size, we’ve seen the introduction of the 20p and £2 coins, and the design on the back of the coinage has changed.

But the Mail is having none of that: just as when that new design – each one forming part of a shield – for the reverse side of coins was brought in, there has to be foaming and frothing, even though the article concedes that “The £1 coin has been in use since 1983 – much longer than the normal life cycle for legal tender of its value”. And the real frightener in the story is the European dimension.

“The coin – in the same gold and silver colours as the euro – will force firms and councils to make expensive changes to parking meters, vending machines and shopping trolleys”. Aaargh! It’s like the Euro! The dastardly unelected Eurocrats have got their way without the British people being given a vote! This is the lamest crap: you could just as easily compare the colours to the £2 coin.

Only later do we find out that one reason for the revamp is to cut down on fraud: an estimated 3% of pound coins now in circulation are fakes. But the protests continue: “The bill to convert parking meters, vending machines and phone boxes to take the new coin may be as high as £100million. Some of the cost will be carried by councils, potentially diverting cash from other work, such as filling pot holes”.

Hell’s teeth, if we took that attitude, we’d still have a system where 240 old pennies made up a pound, and even a dozen of them seriously weighed down your pockets. And how many people still use phone boxes? How many book their travel tickets using coins? Why on why are the inhabitants of Northcliffe House so shit scared of anything new? World moves on, film at 11.

The Daily Mail: sometimes it really gets on your threepenny bits.

[UPDATE 1755 hours: as Captain Europe has pointed out, the 20p coin in fact pre-dates the pound coin by around a year. So it was already in circulation beforehand. But the point about coinage changing over the years still stands. My thanks for the correction]
Posted by Tim Fenton at 09:19

My teeth are long enough for me to remember when the £1 note was scrapped in favour of the £1 coin. The Mail's default position for anything that changes in life was to go into full, carpet-chewing, spit-flecked rage. They are so predictable.

By the way, my eyes aren't as good as they were and sometimes struggle with your anti-robot device. Now THAT would be a good campaign for the Mail: Blogger discriminates against the elderly. Beat wheelie bin stories.

Sadly I have no control over Captcha, which I agree is capable of being a pain in the arse.

1. It'll never work.
2. It'll work, but for all the wrong reasons and be abused, or be too expensive.
3. We were behind it all along.

"the well-loved X is being replaced and shouldn't be".

I bet there are archival Mail stories about replacing the pound note.

Wasn't the 50p shunk to make it weigh 2.5 times as much as the 20p (so they can be valued jointly by weight) sometime relatively recently?

Finally, unlike the Euro, our £1 and £2 will have the same colour scheme; the Euros have the "silver" and "gold" the opposite way around so they're easier to tell apart.

I guess the 12-sided £1 won't be easily confused with the circular £2, though.