Those photo identification gremlins have visited the Daily Mail, where an attempt to show that the empire of the legendarily foul mouthed Paul Dacre and the eponymous Daily Mail Reporter isn’t racist, honestly, has served only to show that their staff don’t have the time or the ability to be arsed checking their stock photos before cobbling articles together. So what happened? “Train passengers were astonished when the conductor told them to ‘beware of gipsies’ as they pulled in to a station. The London Midland service was stopping in Shropshire on Saturday when the announcer said: ‘Now approaching Telford Central. Beware of gipsies and pickpockets.’ Many passengers and residents reacted with disgust at the offensive comments”. 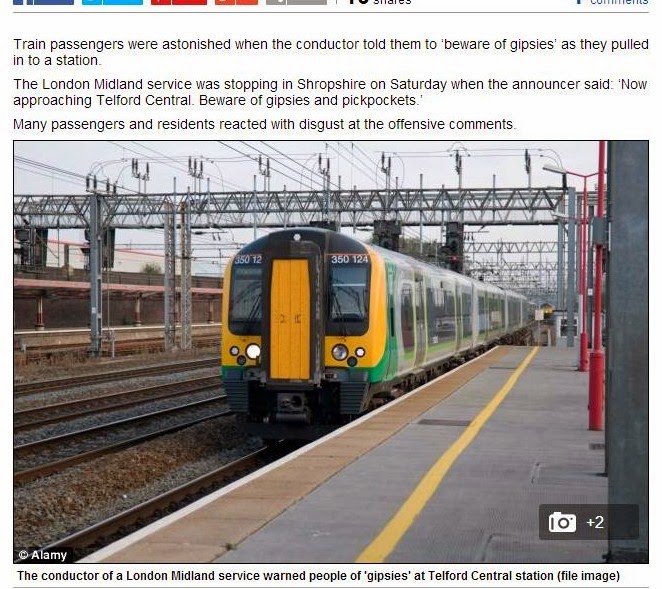 Actually, the Mail found just one passenger who was unhappy with the alleged announcement. But that is to be expected from the Vagina Monologue and his routinely slanted journalism. The problem is the photos – both of them – that have been used to illustrate the piece. Let’s start with “The conductor of a London Midland service warned people of gypsies at Telford Central station (file image)”.

Those of us who have travelled to and from Telford Central, as I did regularly when on an assignment nearby some years ago, will know that the station has just two tracks, and one platform on each. And the line is not electrified. So that photo is not of Telford Central. It is, in fact, a London Midland service from Birmingham New Street to Liverpool arriving in Platform 6 at Crewe. 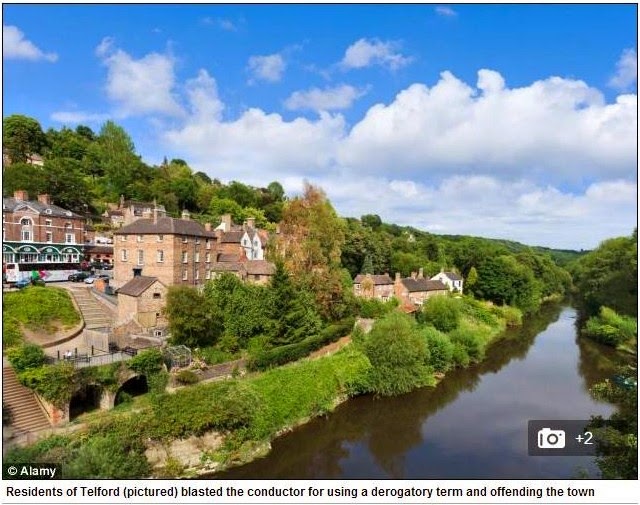 Never mind, though, let’s turn to “Residents of Telford (pictured) blasted the conductor for using a derogatory term and offending the town”. That looks very tranquil, doesn’t it? So tranquil that it certainly is not Telford: that is a view of the town of Ironbridge, taken from the Iron Bridge, looking east along the River Severn (the awning on the building at left gives it away).

So if anyone is going to be offended, it will be the residents of Ironbridge for calling their town “Telford”. But at least they got a photo of a London Midland train, even if nobody thought to ask where it was taken.

Still, it keeps the Dacre doggies occupied while he’s masterminding his next assault on the latest public figure to incur his displeasure. No change there, then.
Posted by Tim Fenton at 10:10

Well Ironbridge is in the Borough of Telford and Wrekin although outlying on the southern border so some way from the station.

However you wouldn't see many gypsies and pickpockets around Telford Central station as it wouldn't be worth their while, being as it's just short of the desolate north, even if they had the propensities that the Daily Mail credits them with.