The Rt Hon Gideon George Oliver Osborne, heir to the Seventeenth Baronet, sat down after delivering his Budget speech yesterday. The Government benches cheered him to the rafters, order papers waving in their hundreds. The Tory supporting press was on side. The opinion polls must surely now turn in their favour. I mean, what could possibly go wrong? Ah well. When you’ve made the mistake of giving the party chairman’s job to Grant “Spiv” Shapps, anything and everything can go wrong. As the favourable press coverage was being written up, Shapps Tweeted an infographic telling “Cutting the bingo tax and beer duty ... to help hardworking people do more of the things they enjoy”. Patronising, much? The response was damning. 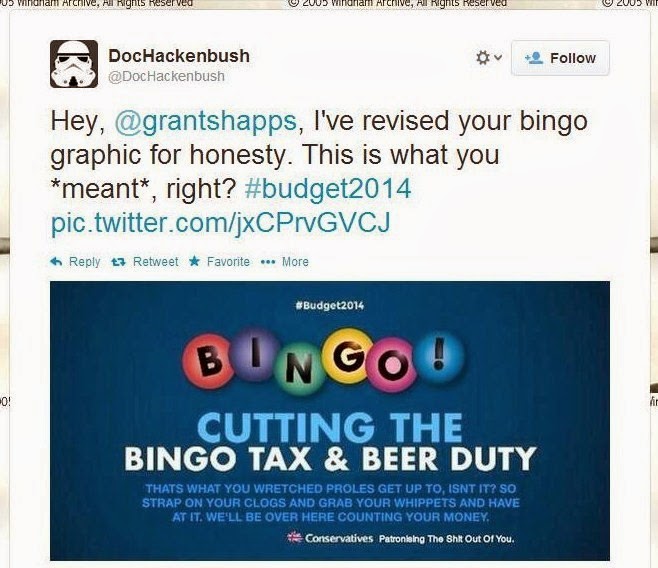 The presence that is Doc Hackenbush was on the case in short order: “Hey Grant Shapps, I’ve revised your bingo graphic for honesty” he announced. The wording spelt it out: “That’s what you wretched proles get up to, isn’t it? So strap on your clogs and grab your whippets and have at it. We’ll be over here counting your money ... Conservatives. Patronising the shit out of you”. Ouch! 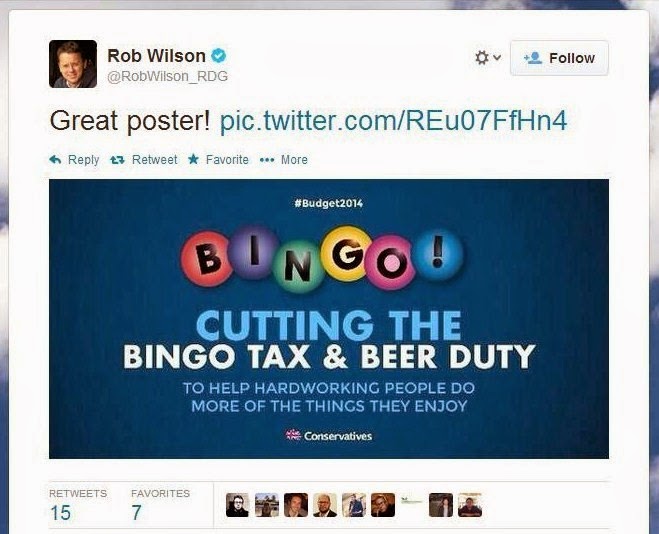 That the infographic was patronising (hardworking people being “they”), as well as unfortunate (by inference, Tories are not hardworking people), was lost on some MPs. “Great Poster!” exclaimed Rob Wilson, Reading’s answer to Fred Scuttle, seemingly oblivious to the storms of derision. 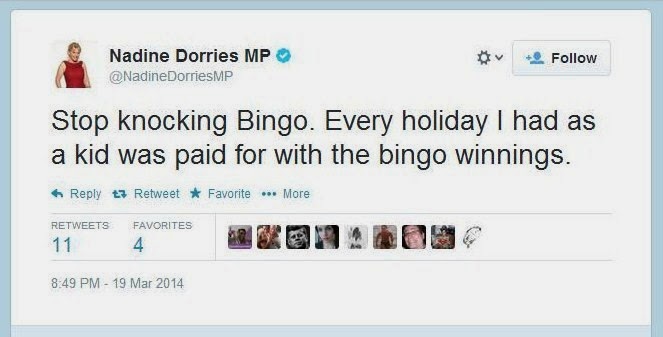 Also pushing back against the tsunami of ridicule was Mid Bedfordshire’s Tory MP (yes, it’s her again) Nadine Dorries, telling “Stop knocking bingo. Every holiday I had as a kid was paid for with the bingo winnings”. She still won’t be getting tea and bikkies round at Dave’s Den, Number Ten. 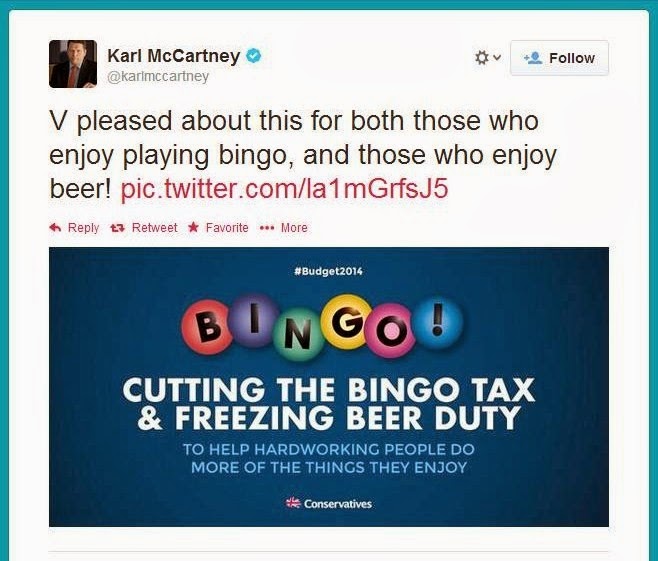 But the prize for combined stupidity and sourness has to go to Karl McCartney, another Merseysider who is now Tory MP for Lincoln. Once again, he just Tweeted out the infographic without first engaging brain: “V pleased about this for both those who enjoy playing bingo, and those who enjoy beer!” he enthused. Mark Ferguson of Labour List tried to break the news to McCartney gently. 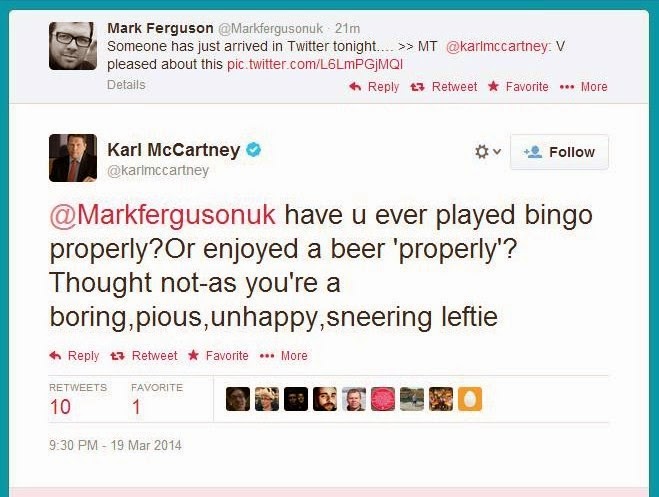 “Someone has just arrived in Twitter tonight” he mused. McCartney was incandescent: “Have you ever played bingo properly? Or enjoyed a beer ‘properly’? Thought not, as you’re a boring, pious, unhappy, sneering leftie”. Rattle out of pram or what? See, you rotten metropolitan Guardian readers don’t know how to drink beer “properly”! It’s not fair! My majority’s only 1050!

We the people are paying for clowns like Karl McCartney, Nadine Dorries, Rob Wilson and Grant Shapps. And on this form, they are only worth it for the unintentional hilarity. That’s not good enough.
Posted by Tim Fenton at 10:27

Notice that Karl McCartney (and I think a few other Tory MPs) tweeted a slightly different version of the ad. No size or colour emphasis on "CUTTING THE" and slightly longer wording.

Suggesting, perhaps, that this was an earlier draft.

Which leads me to conclude that someone reviewed it, and thought the only problems were the font emphasis, and that reducing the number of words in the headline would make it easier for hardworking people to understand.

Have to say this poster was the funniest thing I 've seen in a long time. It takes a lot of thought to be so out of touch.
If Labour have any sense, they will milk this for all it's worth.
Meanwhile, I'm sending up north for whippets immediately!!

Being a beer drinker but not a bingo player I am confused. Is my glass half full or half empty? Or am I just middling class?

Also noteworthy is that Edward Timpson, MP for Nantwich and occasionally Crewe, made a rare visit to the working part of his constituency last week to pose for photos in a bingo hall and "suggest" cutting the tax. Coincedence?
Or a leak of confidential info from the Treasury for political purposes?

It followed a campaign from what Osborne this morning called "the Bingo industry": "The campaign reached a climax when the petition was delivered to the Chancellor’s residence at Number 11 Downing Street, on the 26th February. Nearly two hundred bingo players joined MPs for a celebratory procession past the Houses of Parliament. Rob Halfon MP, Brian Binley MP, Therese Coffey MP, Peter Aldous MP, Philip Davies MP and Meg Hillier MP came out to meet their constituents and give their full support to the Boost Bingo campaign" (http://www.boostbingo.com/home)