Did someone declare war on someone else’s country last night while I was asleep? No. Sadly, this fact does not appear to have penetrated the newsrooms inhabited by those who scrabble around the dunghill that is Grubstreet: the red-tops, in particular, are today full of war talk, such is the desperation to get ahead in the Ukraine game. And much of that talk features the phrase “Cold War”. 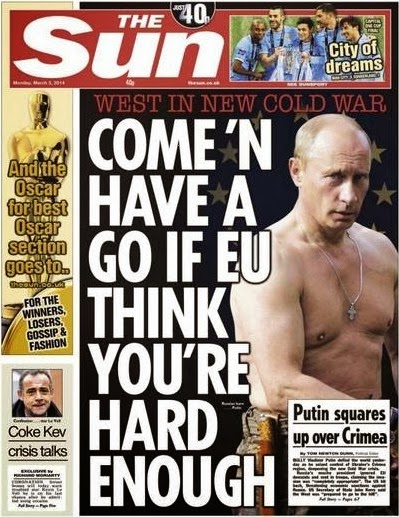 Now colour me pedantic as well as sceptical, but the Cold War featured such non-trivial components as the (then) USSR and USA actually pointing significant numbers of nuclear-armed munitions at targets on their opponents’ territory. What we used to call Mutually Assured Destruction (MAD by acronym, mad by definition) has not yet occurred on Europe’s eastern fringe.

Nor has the EU been threatened, not that you would know it by reading the front page of today’s Super Soaraway Currant Bun. “Come ‘N Have A Go If EU Think You’re Hard Enough” (geddit?!?) is the headline. Readers are told “West in new Cold War”, except the west ain’t involved (yet). “Putin squares up over Crimea” it proclaims, but he hasn’t squared up to anyone thus far. 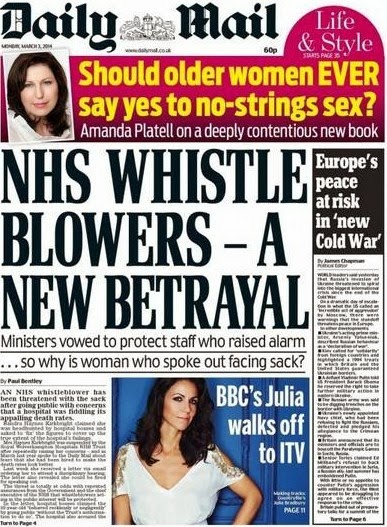 The language is little better at the Daily Mail, where the front page has the horrifying prospect of Amanda Bloody Platell discussing older women and no-strings sex. Nothing like putting the readers off their breakfasts. Here, it’s “Europe’s peace at risk in ‘New Cold War’”. So it’s still the tired old phrase, but it’s OK because the Dacre doggies put quote marks round it. 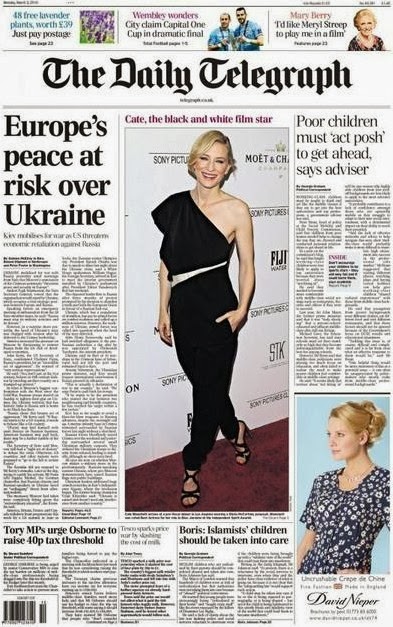 Can’t anyone bring a little sanity to the subject? The Maily Telegraph does its best, which nowadays is not all that good, but better than nothing. “Europe’s peace at risk over Ukraine” we are told. And, as Jon Stewart might have said, two things here. One, it’s unlikely to spill over into the EU, which is the Tel’s intended target, and two, any impact is only going to be on Europe’s fringes. And see below. 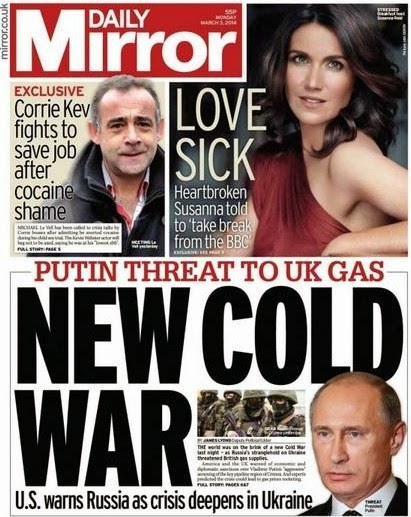 But for sheer jaw-dropping idiocy, it has to be the Mirror, which to its shame has not only joined the Cold War meme, but has also failed to do its energy supply homework. “Putin Threat To UK Gas” screams the headline. Er, hello Mirror people? We get our natural gas supply either from what’s left in the North Sea, or Qatar. Never mind, though, they’ve got a Susanna Reid photo to make up for the howler.

Yes, the situation in Ukraine needs sorting out. Yes, it could deteriorate. But, for the information of the unfeasibly bellicose, any protracted conflict could hurt the Russian economy badly: in early trading today, the Moscow stock exchange dropped more than 10%. Think how nasty that could get if the shooting starts. The USSR could ignore such trappings of the decadent West. Putin cannot.

So most of today’s frighteners are pretty much irrelevant. No change there, then.
Posted by Tim Fenton at 17:37

The Mirror may have a point about gas supplies. Around 10% comes from/via mainland Europe and with the Norwegian and Qatar contributions about 55% is imported from sources out of UK control.

If the pipeline from Russia to Western Europe is cut then the world market becomes very volatile and the UK could be outbid in foreign markets. Leaving us with just the 45% we control. And don't think you can just switch the electric fires on, about 35% of UK electricity generation is from gas fired power stations. Well done Maggy, in saving us from the evil Britsh miners you made us dependent on the whims of a lunatic Russian.

And really annoyingly, UKIP actually precited this sort of scenario in their 2010 manifesto! But with eyes on the rural votes they promptly ruled out windfarms and promised loads of new nuclear plants, which would take decades to come on stream, and have all the problems of waste and security.

Get yourself a wind turbine and a solid fuel burner whilst stocks last!

According to the BBC 30% of our gas comes courtesy of those with snow on their collective boots. Apparently Germany gets 60% of their gas from the Russians. As Germany is driving the EU out of recession then supply problems will impact on all of us.

We live in interesting times.

There is a "new" Cold War, has been since about 1999, but it's completely different from the original. Instead of the world, the battlefield is Eastern Europe and, to some extent, the Middle East. Russia and the West have been in a protracted struggle for influence in these regions since Yeltsin lost his temper with the West over the NATO action in Yugoslavia and the thaw that had started in the late '80s culminating with the end of the cold war in '89 basically went into reverse.

The Cold War wasn't about endless nuclear standoffs (of which there were actually vert few); it was two power blocs working against each other through espionage and proxies whilst on the surface being at "peace" and even sometimes co-operating. Russia and the West do not have the same interests and goals (as, say, the US and EU basically do); they are in competition. What's happening in Ukraine right now is the reality underneath the veneer of the "post-cold war" relationship, much as what happening in Georgia was in 2008. Russia sees the West as a threat and when it feels threatened it resorts to hard power. This is exactly what happens in a cold war scenario, it's all just happening on a smaller battlefield than it used to. As with the original cold war there will be periods of apparent friendliness and co-operation, periods of tension, and flashpoints like now. We can safely call the cold war between Russia and the West properly over when they are not two power blocs competing with each other, as they currently clearly are.