Gemma Worrall is a receptionist at a beauty salon in Blackpool. This is not normally a newsworthy occupation. But, in a less that totally focused moment, she took to Twitter to tell “if Barraco Barner is our president, why is he getting involved with Russia, scary”. Many laughed. Others ridiculed her. Some were downright nasty. And one pundit blamed the Labour Government. 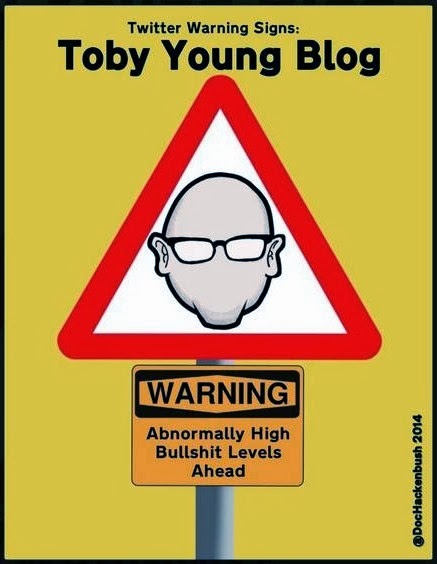 Wait, what? Yes, the loathsome Toby Young has decreed that Tone and Pa Broon done it: “How did the 'Barraco Barner' beautician get 17 GCSEs? Ask Labour and the teaching unions” he proclaimed, following up with “Under Labour you could get a BTEC in Hair and Beauty worth four GCSEs at grade C or above”. Did Ms Worrall include that in her 17 passes? What the heck, it helps the lefty bashing.

“I'm not blaming Gemma Worrall”, he cautions (could have fooled me, Tobes) before concluding “Gemma was failed by the last government”, a remarkably stupid assertion, considering she has secured gainful employment and has therefore become a productive member of society. She has also confirmed that “at school we never learned about politics and current affairs”.

So her one flaky Tweet proves nothing. Yet still be barrels on: “it's not just beauticians who leave school lacking basic knowledge”. And what “basic knowledge” is Ms Worrall lacking? History! “In 2009, Derek Matthews, an economics professor at Cardiff University, was so shocked by the ignorance of British history displayed by his first-year economics undergraduates that he decided to set them a test”.

What happened next? “Of his 284 students, only 11.5 per cent could name a 19th-century prime minister and only 16.5 per cent the British general at Waterloo”. And, as Jon Stewart might have said, two things here. One, they were economics students, not historians. Had they heard of, oh I dunno, Alfred Marshall? And two, if they hadn’t studied 19th Century history, what do you expect?

Tobes is falling into the trap of “I did this at school, therefore everyone else has to have done this, or it’s wrong”, or “I know these facts and so everyone else should too”. He fails totally to understand that a 50 year old metropolitan pundit and a 20 year old beautician may differ in their areas of knowledge, and for very good reasons that have nothing to do with the quality of the education system.

The thought also enters that Tobes’ rant is another exercise in “look over there” punditry: yesterday brought the news that IES Breckland, a Free School that has featured on this blog previously, had been placed in “special measures” after an Ofsted visit concluded that its teaching was “inadequate”. Some of Michael “Oiky” Gove’s cheerleaders ought to look to put their own houses in order first.

In the meantime, Ms Worrall will probably think carefully before Tweeting in future.
Posted by Tim Fenton at 10:50

It is one thing to have knowledge of facts, it is another to be able to use them properly.

I wonder how society would judge the comparative usefulness to it of a Toby Young and a Gemma Worrall?

Answers on a postcard to Michael Gove with a description of your qualifications in Latin please - just to prove something or other.

I would be intrested in weather any politicle journlist or even mp could answer and of the basic education I use for my job. maybe the country would be better if they got an education in things like "Ipv4 subnetting" or "basic DNS setup" they they might realise diffrent pepole use diffrent skills

Never mind her being failed by the education system (probably true and government of the day is irrelevant because international events have never been taught), how comes she hasn't learnt anything from newspapers since leaving school?

And before slagging her off, how many hacks and tory MPs think Germany started WW1 ?


Still, could be worse, plenty on 20 year old yanks aren't sure who Obama is!