The situation in Ukraine is serious and likely to deteriorate rapidly. So now is not the time for personal grandstanding: this is way too important to be used for mere self-promotion. Well, it is for most people, but for the terminally shameless, nothing is off limits. So while the diplomats talk, and a military confrontation moves closer, one person is using the crisis for political points scoring and career enhancement. 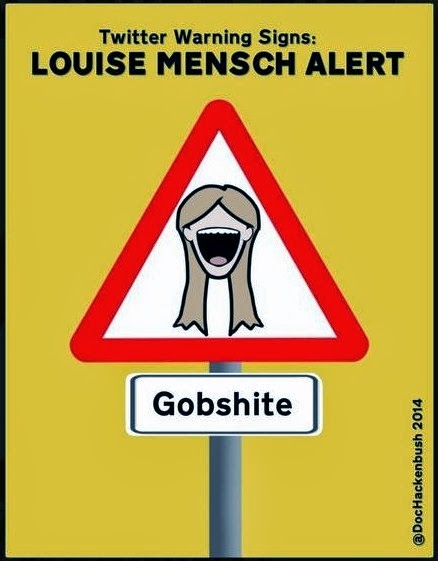 Who would do such a callous thing when Ukranian and Russian troops may soon be squaring up to one another? But you all know that for professional know-all Louise Mensch, nothing is off limits when it comes to creating More And Bigger Opportunities For Herself Personally Now. And, as a good loyal Tory, she uses the whole business as an excuse to lay into the Labour leadership. 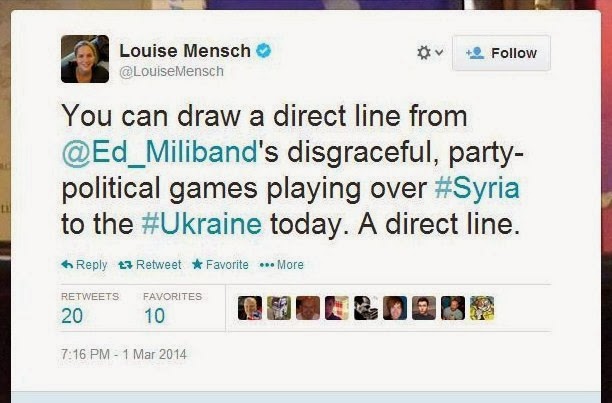 “You can draw a direct line from [Ed Miliband’s] disgraceful, party political games playing over Syria to the Ukraine today. A direct line” she stomped, not being sufficiently up to speed to know that we no longer talk of “the Ukraine”.  Also she is in line with many Tories peddling the line to bash Mil The Younger, but not with the reality, that the vote was lost because of a lack of Tory support. “Had Labour stuck to their agreement of a brief airstrike on Assad when we still could, Putin would not have trumped in Syria” she continues, once again ignoring reality. What is this “brief airstrike” she talks of? But interesting to know that Putin not only went to Syria – I missed that in all the excitement – but also suffered a bout of flatulence into the bargain. 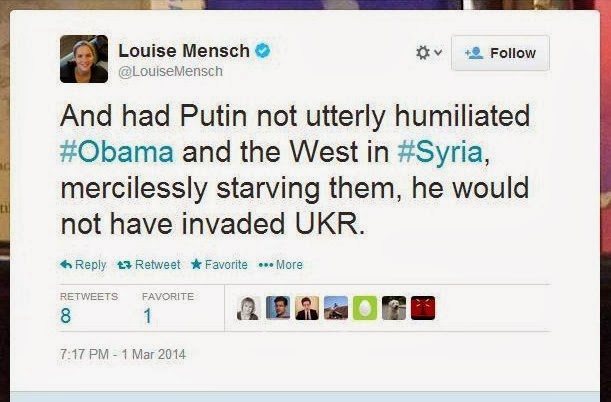 Do we get Obama blaming as well? You betcha, says Sarah: “And had Putin not utterly humiliated Obama and the West in Syria, mercilessly starving them, he would not have invaded [Ukraine]”. And, as Jon Stewart might have said, two things here. There hasn’t (yet) been an invasion, and Putin hasn’t starved anyone, although he has supported the Assad regime – but that’s not the same thing. 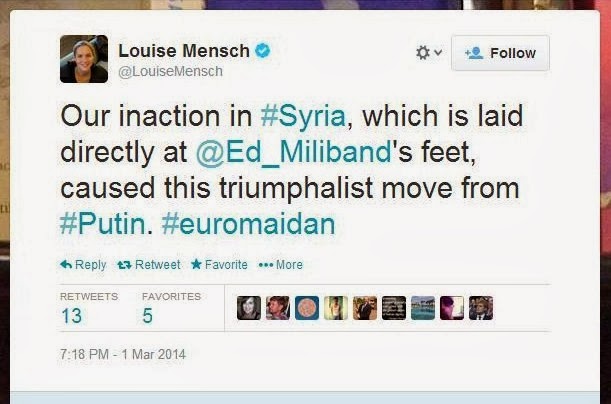 But if you don’t succeed, try, try again – and in Ms Mensch’s case, fail again: “Our inaction in Syria, which is laid directly at [Ed Miliband’s] feet, caused this triumphalist move from Putin”. Plain flat wrong: Moscow deems Ukraine to be within its sphere of influence – as agreed by Winshton and FDR with Stalin, in case anyone forgot – and it has naval interests, and a large ethnic Russian minority, in the country. 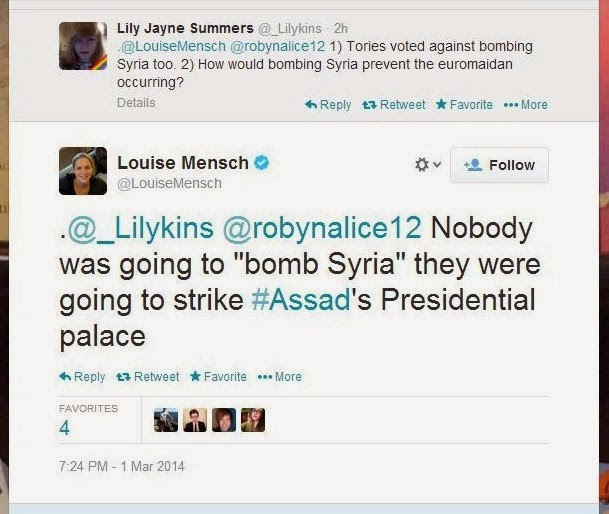 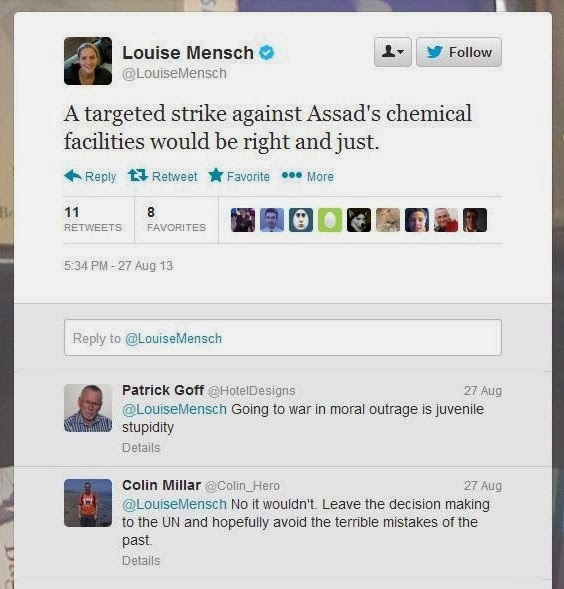 And what her urging a bombing of Syria would have achieved is unclear, so this is revised in the retelling: “Nobody was going to ‘bomb Syria’ they were going to strike Assad’s Presidential palace”. That’s not what she said at the time: “A targeted strike against Assad’s chemical facilities would be right and just”. No palaces involved. In any case, she knows sweet jack about any intended targets.

But what the heck – shoot from the hip and Roger Ailes might hear her, right?
Posted by Tim Fenton at 14:39

Apparently Russia wanted to have a naval base in Syria but due to the current situation abandoned the idea. Every cloud etc

Into the Valley of Death rode the six hundred with the new Florence Nightingale brandishing her lamp more intent on destruction than saving lives.

Could be subject of a new Fox News video game?

Certainly not game for a laugh.