The occasionally tenuous relationship between Tory MP for Mid Bedfordshire (yes, it’s her again) Nadine Dorries and reality has come back into focus as she has taken to her not-really-a-blog to berate the BBC in support of what she calls “Reform of the License [sic] Fee”. “In this day and age, a tax on the ownership of a television is a completely outdated concept” she tells anyone not yet asleep. 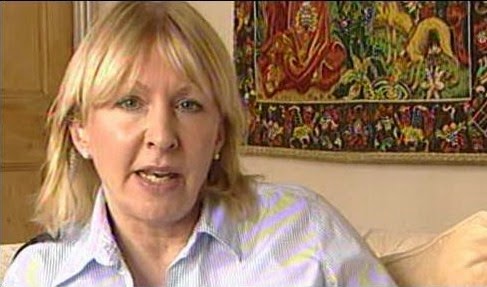 And, as any fule kno, the Licence Fee is not levied per television, or I would need more than one of them for my house, which I do not. But this is par for the course for an MP who told Spectator editor Fraser Nelson, who ought to have checked his facts, that “When she was growing up in Liverpool ... the city had eight Tory MPs and an all-Tory council”. As I pointed out, it had neither of these.

“BBC managers deliberately concealed the antics of a paedophile and sex offender, practice blatant political bias and I have lost count of the number of times their journalists have misrepresented events”. Where do we start? If she means Jimmy Savile, he never got convicted, so he can’t be called a “sex offender”. The political bias is in her mind. And so is the misrepresentation.

But do dig yourself in deeper. “BBC executives conspire to cover up a culture of sexual abuse”. That’s the fragrant Nadine at her nastiest: a blatant and defamatory smear which is actually opinion, but dressed up as fact. Then there is calm, as she tells “I do enjoy a great deal of their output and I know the same is true for almost all my constituents”. That must have been a pretty extensive polling exercise, then.

“The model of the BBC, which is in effect state run television, is outdated in this modern world of media and communication. Such a structure of payment and aggressive persecution would be more in keeping in a soviet style country”. It isn’t part of the state, the pursuit of non-payment of the licence fee she’s making up, and she knows sweet jack about the former Soviet Union.

“It would appear that there is no politician in any party brave enough to take on the BBC for fear of retribution and punishment via its political reporting - in the same way as is practiced by newspapers against individual politicians who dare to challenge or criticise them”. Bullshit. It the Beeb were to exclude its critics and then go after them, they wouldn’t give airtime to those like Herself Personally Now.

Nor would they entertain Amanda Bloody Platell, Melanie “not just Barking but halfway to Upminster” Phillips, Dan, Dan The Oratory Man, Nigel “Thirsty” Farage, Quentin Letts (let’s not), Dominic Sandbrook, James “saviour of Western civilisation” Delingpole, or the loathsome Toby Young. “It is time for people to take power where politicians have consistently failed” says Ms Dorries in conclusion.

She’ll be waiting a long time for that bus to arrive. No change there, then.
Posted by Tim Fenton at 07:10

"“It is time for people to take power where politicians have consistently failed” says Ms Dorries in conclusion."

Well that just about covers every area under the sun (on the odd occasion it is seen to appear)?

Nadine seems to have confused a licence to access our finite and commonly held airwaves with a tax. As a raving lunatic *cough* I mean free market capitalist she should be all too familiar with capitalist interpretations of the tragedy of the commons. Perhaps there's an argument then for funding the BBC with revenue from commercial broadcast licences? Would the treasury give up that revenue to the BBC willingly? Could such a revenue stream even begin to cover the BBC's operating costs without becoming too onerous on the commercial broadcasters? I doubt it very much. So the alternatives are either the status quo or complete privatisation (in the minds of free market Tories), and that'll lead to a perfectly fabulous media and news landscape (the BBC's news output is already tame to say the least, it'll be non-existent after privatisation).

I confess, I am in favour of significant reforms to the way that the BBC is governed, run and even owned, but not along lines that Nadine or any of her chums are likely to find ideologically appropriate. I'd like to see the BBC and the BBC Trust mutualised, with elections to the BBC Trust held every 2 years (staggered, with trustees serving 4 year terms), elections of a financial comptroller every 4 years to keep costs under control (they'll need to be qualified accountants/auditors), votes on key appointments (excluding editor-in-chief – we don't want the news to merely reflect our own biases) and decisions regarding services and executive remunerations, referendums required on any above inflation increase in the licence fee and most important of all a charter which places ownership (with anti-carpet bagger protection) of the BBC in the hands of the citizens of the UK in perpetuity with the government holding a duty of upkeep only. We need media plurality in this country, not a plutocratic and commercial media masquerading as a 'free press'. We won't get that whilst the government, our incredibly unaccountable government which has thus far eschewed any attempt to hold it to account (*cough* right of recall *cough* electoral reform *cough*), holds the reigns and can whip the DG and EiC into line with a thread of disadvantageous charter renewal.

You omit the fragrant Nads contribution to world history. She sussed out that les freres Barclay of Brecqhou are funding the BNP/EDL via money laundering in Monaco.

I don't think that commercial TV companies would want to compete with a commercially-funded BBC for the already thinly spread advertising revenue.