Hardly had the rival Royal Charter, proposed by the Murdoch, Rothermere, Barclay Brothers and Desmond press among others, been launched and duly lauded by the usual suspects in the Fourth Estate, than its shortcomings caused the whole exercise to unravel, as I suggested the other day. Now, despite valiant editorial spinning, the wheels have come off the wagon. 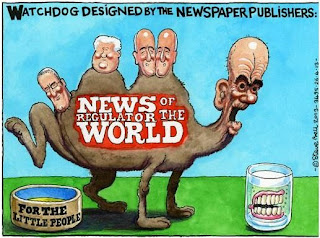 That spin was maintained yesterday by the two papers doing the most vocal cheerleading, the Sun and Daily Mail, with the former once again depending on non-bullying political editor Tom Newton-Dunn telling “British press unveil rival to non-starter charter”. Yes, “It agrees to a tough new Press watchdog, but one free from Ministry of Truth-style political interference”.

Meanwhile, Daily Mail Comment, the authentic voice of the legendarily foul mouthed Paul Dacre, loftily proclaimed “A truly independent regulator of the Press”. Here, again, were such fraudulent ideas as Great Britain having had 300 years of democracy, when the first General Election fought under a universal franchise was actually just 84 years ago – in 1929.

Sadly, both Mail and Sun pronouncements are weapons grade bullshit, as a cursory examination of the rival Royal Charter shows. Political interference is rife, with the ability for party-adherent peers to run the new regulator, just as they did to such lamentable effect with the now discredited PCC. The new regulator could pick and choose which complaints it deals with – just like the PCC.

It is not just the Hacked Off campaign that has called this exercise out as effectively being a con trick. The Media Standards Trust (MST) has noted that the rival Royal Charter “differs substantially from recent public opinion on press regulation”. The public has little confidence in the press setting up and running its own regulator – maybe because they did that with the PCC, and it failed. Miserably.

But the final nail in the coffin of this latest industry attempt to deal off the bottom of the deck has come, with characteristic eloquence, from Christopher Jefferies, who notes that the proposed system would “perpetuate the very abuses and corruption that made the Leveson inquiry necessary” and “that walking away from Lord Justice Leveson's recommendations in this way and at this stage is simply not acceptable”.

The press cannot return to marking its own homework. That’s not good enough.
Posted by Tim Fenton at 11:55

Paul Dadge, Christopher Jefferies, the McCanns and the Dowlers have great power in this campaign.

Celebrities can be easily, but wrongly, dismissed by the press. Public sympathy is much stronger for the ordinary individuals who's lives have been severely damaged by media lies and intrusion.

I really hope they are prepared to stick with the campaign to implement Leveson.