Bloggers and anonymity. It’s a subject that the perpetually thirsty Paul Staines, who styles himself Guido Fawkes, knows all too well. Back in 2007, before The Great Guido sold out to the Fourth Estate and became just another shill for vested interests, Staines was maintaining the pretence of anonymity as he agreed to appear before The Inquisition Of Pax Jeremiah on Newsnight.


So he appeared off set, as a silhouetted figure against the background of his trademark Fawkes figure, generating a disapproving ridicule from Paxo until the Guardian’s Michael White, clearly tiring of the charade, named him. The following day, Staines’ appetite for jaw-dropping spin saw him pretend that everyone who wanted to know already knew and it was no big deal.

It was a big enough deal for Staines to insist on his face being concealed if he was to appear on Newsnight. Regular observers of the Fawkes blog and its wilful twisting of facts will not be surprised that its creator had no problem worming his way out of the moment when he was exposed as a sham rather greater than the hacks and pundits he claimed to have been exposing.

The Great Guido maintained the cloak of anonymity for one reason, and one alone: to enjoy an advantage on his prey and his opposition (whether other bloggers or the mainstream press). It’s the same reason that his tame gofer, the odious flannelled fool Henry Cole, kicked off at Zelo Street for publishing a photo of his newly appointed teaboy Alex Wickham: the ending of anonymity.

It was hoped that folks might say things when Wickham was around that they would not do after spotting Staines or Cole, both all too easily recognisable. Cole boasted loudly to this effect. He did so at the wrong time, and in the wrong place. And the arrogant spin of the Fawkes rabble is still at work, as Staines yesterday renounced his past in exchange for a few headlines. 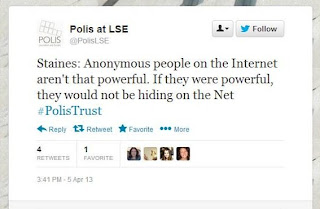 Staines appeared at the LSE’s Polis Journalism Conference, for a session titled “Trust in Power”. During proceedings, he was reported as saying “Anonymous people on the Internet aren’t that powerful. If they were powerful, they would not be hiding on the Net”. Sunny Hundal, who knows Staines well, commented on the idea that anonymous bloggers were “not worth taking seriously”. 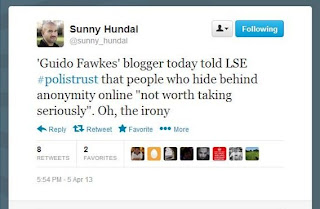 “Oh, the irony” he noted. Anonymity was “not worth taking seriously” to the extent that Staines would not go on Newsnight without it. And the whole idea of not coming clean about Alex Wickham’s appearance was to give him the cloak of anonymity that Staines had lost, and Cole tried unsuccessfully to pull off while at Edinburgh University. Now The Great Guido was shamelessly trying to rewrite history.

The Fawkes rabble are just stinking hypocrites. Another fine mess, once again.