Fresh from obsessively poring over a 16 year old’s Twitter feed so that he could enjoy the fruits of trashing her hopes and dreams using the front page of the Mail On Sunday, hack Russell Myers has been rewarded with co-authoring a scoop of dubious veracity as the MoS has attempted to frighten readers with visions of sinister outside forces taking over their kitchens. 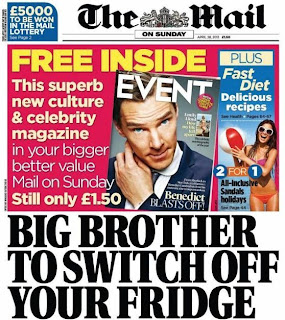 “Big Brother To Switch Off Your Fridge” thunders the headline as Myers and co-author Martin Beckford warn “Power giants to make millions - but you must pay for 'sinister' technology”. Terrible, eh? And of course the EU is involved, well, it might be. But a quick look at the arguments advanced shows that this story is total crap. Nobody is going to switch off anyone’s fridge, for a start.

Mains electricity is supposed to be supplied at a voltage of between 220 and 250 volts AC, with the current alternating at 50 cycles. That variability is because, even when the National Grid is supplying power to tens of millions of homes and businesses, achieving perfect balance just isn’t going to happen. On top of that, there are occasional spikes in demand.

So the grid wants to help take the “sting” out of those spikes. This could be achieved by appliances not taking power for short periods, maybe a few seconds at a time. It would additionally be good for the appliances, as subjecting them to power spikes could induce component failure, and we’d rather not have to replace them if there was a way of keeping potentially damaging power fluctuations out.

This is not “sinister”. It is good for all concerned. Instead, the MoS tries to whip up fear and loathing in its readers by suggesting that energy suppliers will make millions in extra profits, but this too is drivel: you pay for the electricity you use whether they have to fire up reserve capacity or not. What is being suggested is going to save not just the appliances, but your energy bills.

Then readers are told that green energy, particularly wind power, is “unreliable”. This is also crap: “variable” does not mean “unreliable”, not with today’s technology. It’s not about wind power. Nor is it about EU targets. The MoS is underpinning its lead story with a blatantly false association, reinforced by its why-oh-why editorial “Green zealots and a sinister power grab”. No zealotry or grab is involved.

But because the agenda has to be peddled, readers hear from Big Brother Watch (another manifestation of the so-called Taxpayers’ Alliance) and rent-a-quote Tory MPs. The former Soviet Union is invoked. This is so like the kind of invented horror story that regularly crops up in the Express – especially when the subject is the EU – that it looks as if the MoS is also headed into cheap and nasty territory.

Meanwhile, nobody’s freezer is in meltdown. Time to change the record.

[UPDATE 2030 hours: I'm indebted to Dominic Zapaman for demonstrating that the MoS has not even bothered to get its basic facts right on the electricity supply. The article talks about the frequency of the supply falling "to 47Hz" and then heading "towards 52Hz". This is complete rubbish, as the frequency does not very to the same extent as the voltage. 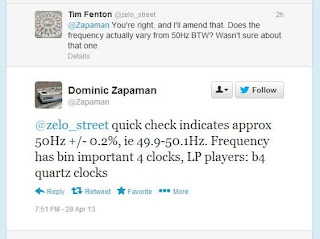 As Dominic points out, the variation in frequency is from 49.9Hz to 50.1Hz. The numbers the MoS talks about do not happen. Given that they can't get such basic facts right, one has to wonder what else has been wrongly assumed - or just invented to fit the headline. Not that Russell Myers will be telling, you understand]
Posted by Tim Fenton at 11:53

The Telegraph also ran with a duplicate story, allegedly interviewing the same people, who responded with the same answers.

My suspicion is that a lobby group or a political faction is behind the story.

I think it still has a mistake but the quality of journalism is higher.

Same hack (Daniel Boffey) has his by-line on both articles.

So it could just be a reheating, based on the original piece.

just don't tell them that the ABS brakes most cars now have to meet Euro safety standards actually take the brakes off while the driver is pressing the brake pedal. imagine the scare they'll make out of that.