I visit London pretty regularly. And every visit invariably means using the transport system, including buses. But the idea of buying a ticket from the driver never enters. What would be the point? It costs so much more than loading credit on to my Oyster card, which I can buy top-ups for before setting out from home. So the news that cash fares on buses are to end should not be a big deal. 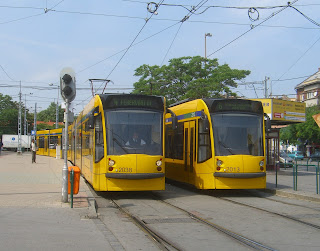 Budapest's Siemens Combino people movers can shift more than 400 punters. But none of them pay on board

Where does this place London? Well, rather in the European mainstream, as a quick look at other major cities shows. Let’s start with Italy: in Milan, Rome and Naples, you can’t buy from the driver on the tram or bus. But no-one has a problem: every news stand or kiosk sells transport tickets, whether for all-day travel or one-off trips. Not sure about yours being open early doors? Buy the previous day.

After all, you only set the clock going on your ticket validity when it’s validated in the machine on board the bus or tram. Like in Prague, where there is a shop at the airport: the staff hand out maps and sell tickets. Again, there are no sales on board. It’s not difficult to understand. Same idea in Budapest: buy before you travel, because bus and tram drivers don’t handle cash.

What about smart cards? Yes, other countries have something similar to Oyster, and with the same kinds of incentives to use them, rather than keep buying one-off tickets. Take the Spanish city of Valencia, for instance, where your €2 Mobilis card can be charged with ten trips at €7.20. A one-off journey costs €1.50. Alternatively, you can charge it with a day ticket for just €4.

The system covers buses, trams and the Metro that takes you to and from the airport. Again, no cash changes hands on board. This doesn’t bother the locals, but dopey tourists have a habit of only thinking in cash terms and making impulse purchases. The Portuguese capital, Lisbon, is used to this: surface transport operator Carris is more than happy to accommodate them, given the numbers.

Paying cash on the tram? That’ll be €2.85 a throw, thanks. A return trip on the Santa Justa lift? Just €5 a person. Or you can engage brain, find one of the many sales points around the city (detailed on the Carris website) and buy a cardboard smartcard for €0.50 – then charge it with single journeys at just €1.40, or day tickets at €6. You have an incentive. Just like in London.

Except that London will no longer be giving that option of paying the driver. Because the proportion of cash fares (1%), unlike tourists in Lisbon (a lot more), means it’s no longer worth the candle. This, people, should not be a problem for you. It does not faze the citizens of cities across Europe, who got used to buying their travel tickets, or charging their smartcards, before travelling some years ago.

And if the inhabitants of Crewe can figure it out, so can you.
Posted by Tim Fenton at 10:52

Worth noting that if you have lost your Oyster card and/or have no cash, the bus driver can let you on the bus and give you a credit slip to repay later. So, the fears of this endangering and stranding passengers are a bit wide of the mark, too.