Today is St George’s Day. And, so what? There do not appear to be any flags flying anywhere in the area, it’s a normal working day, and even the campaigns of a few years ago agitating for the day to be made a Bank Holiday  seem to be dying down (this last being particularly pointless, given the proximity of Easter, May Day bank holiday and Spring bank holiday). 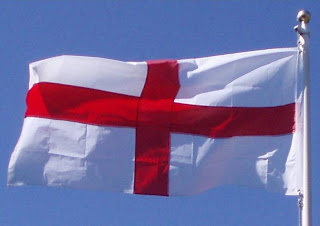 Nevertheless, politicians are still keen to be seen standing up for the memory of someone who never set foot in England, is revered not just by Christians but also Muslims, and died a grisly death at the age of just 23. Young Dave has said “I send my best wishes to everyone celebrating St George's Day today ... I think it's great that in recent years it has become more and more popular to mark St George's Day”.

Which means Cameron thinks he can garner a few more votes for the Tories in next month’s local Government elections, then. And even the newest of new media is getting in on the act, with the HuffPost UK asking “Why is England’s national day not celebrated?” to which the answer is that it is celebrated, but that most of the population have better things to do.

At least this year we’ve been spared the Daily Mail’s 2008 rant: “Cancelled on police advice: St George's Day parade through the Bradford race-riot zone”, which superbly misrepresented events in the city, capped off with a why-oh-why quote from Shipley MP Philip Davies. The ConHome whingeing at Sandwell Council  the next year was in the same vein. Suddenly we should all be celebrating St George’s Day.

I’m not sure. This gives every impression of another attempt to celebrate a day that most folk couldn’t be bothered with in the past. Once upon a time, New Year’s Day was just another working day in England – only in 1974 was it made a Bank Holiday. The St George’s Day campaign is trying to add yet another holiday to that list. But how much is mere propaganda, and how much substance?

Of some interest here is a post by Ed West on Telegraph blogs, “St George's Day – a meaningless, fake tradition invented in the 1990s to sell beer”. He has a point. I can’t recall the day being so much as mentioned before then. And there is a parallel in St Patrick’s Day, which is often little more than an excuse to push ersatz folk music washed down with nitro-keg Guinness in identikit theme pubs.

I still remember St Patrick’s night in the Frankfurt suburb of Sachsenhausen, back in 1998. The “Irish Pub” was impossibly full. Much Guinness was consumed. But the musicians were locals, and the English speaking bar staff were from Australia. It was nothing more than an excuse for cheap commercialism. Only in the replacement of Guinness by Wells’ Bombardier is St George’s Day any different.

Celebrate if you wish. But also think on about who is driving this campaign.
Posted by Tim Fenton at 12:57

Be fair, pretty much every event nowadays is a vehicle for rampant commercialism. Christmas and Easter got this down to a tee decades ago, so it's only fair to let St. George join in the fun.

My only objection is that I'm not that keen on Bombardier. I will be increasing the share price of whichever company owns Pimms, thank you very much.

Rest in your beds. St George and a damsel in distress were spotted in front of Bradford City Hall today!

Back in the 60s when I was t'lad St George's Day was marked by Cubs, Scouts, Brownies, Guides plus assorted adult organisations taking part in a parade that marched through our village to the church. This was held on the closest Sunday to 23rd April and always marked a low point in my Cub life as this day also happened to be my birthday and I hated marching and church in equal measures.