The empire of the legendarily foul mouthed Paul Dacre has form when it comes to putting the boot in on teenagers (you can see the Zelo Street take on previous episodes HERE, HERE and HERE). And it has developing form for ditching proper journalism in favour of trawling social media sites. These strands came together yesterday in a characteristically vicious attack on Paris Brown. 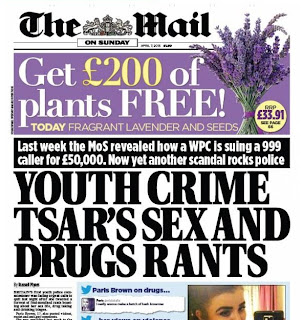 Who she? Well, Ms Brown, who has just turned 17, works as an office junior at Swale Borough Council. She was one of 164 applicants for Youth Police Commissioner, and she got the job, advising Commissioner Ann Barnes. But before taking up her post, her Twitter feed was splashed over the front page of the Mail On Sunday, along with the usual faux outrage and manufactured calls to resign.

Paris Brown’s crime was to let off steam and brag – like teenagers do – on Twitter. Yes, anally retentive Mail people, young people boast about booze and sex. On occasion they swear (like Paul Dacre does. A lot). They make politically incorrect comments. Some of these can be crude. But – guess what – they’re only teenagers. So parents, relations and friends know to cut them a little slack.

Not the Mail. It accused Ms Brown of racism and homophobia in addition to the outrage over under-age drinking and therefore law-breaking. Then it banged on about the value of her parents’ house. Soil the sodding bed, Dacre doggies, can’t you think of anything else to argue about? What the hell has the value of the family home got to do with her job suitability?

And as to the accusations made – let’s start with lawbreaking. In the same paper, Liz Bloody Jones, another of the Mail’s unappealing bevy of Glendas, was advocating breaking the law so that Herself Personally Now could park in disabled bays because it was more convenient for her. So will Dacre or his Sunday deputy Geordie Greig be shopping her to the rozzers or firing her? Will they stuff.

Racism? The Mail is calling out someone else for racism? What planet are these people on? Travellers, Muslims, any immigrants – especially those who are not white, anyone talking foreign – they don’t end up getting a disproportionately lousy press from the Mail for nothing. The Stephen Lawrence case should not be allowed to deflect from the trashing they gave Winston Silcott.

And homophobia? Cue Quentin Letts (let’s not): “Angela Eagle ... a pinstripe-suit-wearing lesbian ... yelling ... like a tattooed stevedore”. Or, more satisfyingly, the unfunny and tedious churnalist Richard Littlejohn getting his come-uppance from Michael Winner for that homophobic rant on live TV. And save us the “it’s two different papers” drivel. They share the same cesspool.

Bunch of hypocrites the lot of them. With an unhealthy habit of picking on kids.

[UPDATE 1910 hours: Paris Brown now shares the distinction with another teenage resident of Kent, Rory Weal, of being subjected to a characteristically leering and sadistic kicking by Melanie "not just Barking but halfway to Upminster" Phillips: "This yoof crime tsar is just a silly little girl" begins the rant.

After merely sneering at Ms Brown's ideas on policing, we get to the main event, where Mad Mel asserts that her job will entail "telling the Police how to behave", which it will not. Then she goes completely gaga and starts frothing about the NHS and BBC.

While ranting about the latter - from which she has a nice little regular earner - Mel says "a senior executive once admitted that she had no idea what a £58,000 a year 'decision support analyst' on the staff actually did". Yes Mel, and neither would you or I unless we had first engaged brain and looked at the intercoursing job description.

Then she asserts that "action" ought to be taken against Paris Brown for what she said years ago on her now deleted Twitter feed. Christ on a bike, the Mad Mel household must be a forbidding place. I wonder if there is a house rule banning humour other than that approved by Herself Personally Now. Melanie Phillips ought to lighten up and get a life. And Paris Brown and her new boss should stand firm and tell the Dacre attack doggies where to shove their teenager bashing antics]
Posted by Tim Fenton at 10:52

So, you know Dacre isn't involved in the Mail on Sunday....? Get it right.

Paul Dacre is editor in chief of Associated Newspapers, and therefore is involved in the MoS.

So you should try getting it right. You're welcome.