Another day brings another opportunity for the perpetually thirsty Paul Staines and his rabble at the Guido Fawkes blog to parade their ignorance before a grateful readership. Today’s masterfully executed foot-in-mouth moment comes as the Fawkes folks discover some figures on the cost of Tax Credits, and as a result draw a conclusion rather different to reality. 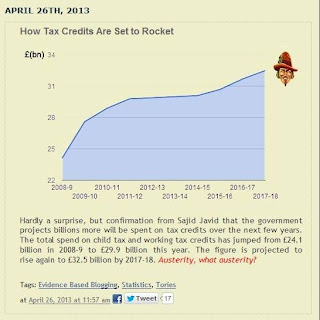 “How Tax Credits Are Set to Rocket” is the headline, and at the outset the standard of routine misinformation is clear, with a graph presented which, not for the first time with the Fawkes blog, cuts off the Y-Axis well short of zero. This makes the rise in Tax Credits look far greater than it really is. And that the first year for which figures are shown is 2008-9 does also not appear to tell them anything.

At this point, it may prove instructive to mention that, according to HMRC, Tax Credits are paid to those without children if their annual income is below approximately £13,000 for a single person and £18,000 for a couple (Child Tax Credits are given in addition). So those in receipt are always going to be the least well off in society.

Now consider the start date for that graph: 2008 was when the global financial crisis hit, and the UK’s recession began. Hence the amounts of Tax Credits being paid going up, as this shows there are more people out there on lower incomes. As the recession has bottomed out, so the amounts of Tax Credits paid have more or less stabilised. This, too, is not too hard to understand.

That the numbers are predicted to get worse from 2014-5 means, therefore, that either the Tax Credit regime is becoming more generous (doubtful), or that there will be more people on low earnings. This suggests that economic growth in the UK will be weak, as will overall economic conditions. It is these factors that are behind the 35% projected rise in Tax Credits over nine years.

To no surprise at all, the Fawkes rabble has drawn the entirely opposite conclusion, signing off “Austerity, what austerity?” when it should be clear to anyone paying attention that the graph they have just presented demonstrates not only the onset of that same austerity, but that it will continue for several more years to come, except perhaps in the world of The Great Guido.

This is, after all, a land inhabited by well-funded lobby groups and their hangers-on, along with the full range of overmonied hacks and pundits, those representatives of the MSM that was previously hated but to which Staines and his pals have now so shamelessly sold out. The less well off are something they do not have to consider: after all, they can always find a chap to do that sort of thing for them.

It’s just a pity they can’t be bothered to get their facts right. Another fine mess.
Posted by Tim Fenton at 17:46

Actually, I'm not even sure this counts as a rise. Difficult to scrutinise figures when the source isn't properly specified, but a rise from £30bn in 2013-14 to £32.5bn in 2017-2018 is a rise of just over 8%, which works out at 2% over 4 years. As it's unlikely we'll be getting inflation under 2% any time soon, that to me looks like a slight real-terms cut. (And I can't see anything on the graph to indicate the figures are inflation-adjusted.)

Whether that is justified or necessary is open for debate, but it's not what I'd call "rocketing".