In that parallel universe that is entered on crossing the threshold of Northcliffe House, the legendarily foul mouthed Paul Dacre and his obedient minions have once more worked their magic potion of paranoia and come up with a scare story more frightening than anything since, er, maybe a week ago. That strange being known as “the left” has returned to take away the most beloved of tabloid memories. 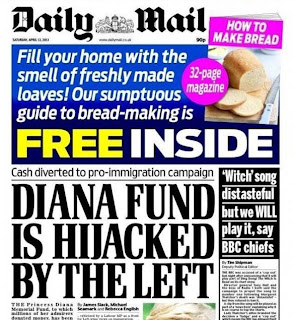 “Princess Diana fund cynically hijacked by the Left: How money is being diverted to pro-immigration campaign fund” thunders the headline. Sadly, though, there is no “pro-immigration” campaign involved, the “left” association is only in the minds of Dacre and his attack doggies, and there is no “diversion” of funds. And, to put the lid on it all, the Diana fund has actually been wound up recently.

The target of this bile is something called Migration Observatory. It is held to be part of “the left” because it is advised by a Guardian journalist, and the husband of another Guardian journalist. The paper is then denounced as being “Left-wing” (rather than just to the left of the Mail, which is not quite the same thing), and there’s the guilt by association. So what does Migration Observatory do?

The body “provides independent, authoritative, evidence-based analysis of data on migration and migrants in the UK, to inform media, public and policy debates, and to generate high quality research on international migration and public policy issues”. And it’s also advised by the Sunday Telegraph’s news editor. Why is it such A Bad Thing? Because its impartial analysis undercuts groups like Migration Watch.

The latter, and its supremely litigious head Andrew Green, clearly don’t like competition, especially when it shows them up. So word has clearly gone out to twist the rationale of Migration Observatory – good quality information to inform debate – and pretend that this means it is in favour of immigration, when it does not make judgments about whether this is a good or bad thing.

And what the Mail clearly dislikes is that the Diana fund has given grants totalling over £7 million to a “Refugees and Asylum Seekers initiative” (see the reasoning HERE). This, though, is not “pro-immigration”. It is helping the vulnerable and marginalised. In the perverse world of Paul Dacre, doing such a thing without his express approval merely makes such groups fair game for attack.

That includes taking the term “refugees” from the site of the Diana fund and changing it to “immigrants”. It also includes smearing the fund’s initiative as “pro-immigration propaganda”. “The aim of the scheme is to alter British attitudes to immigration” asserts the Mail. But it makes no judgment on immigration. This is just another slice of warped and angry intolerance and bigotry.

As such, it fits right in at the Daily Mail. So that’s all right, then.
Posted by Tim Fenton at 15:02