IDS And A Poverty Claim

The Quiet Man has once again turned up, with or without the volume: Iain Duncan Cough (for it is he) has now been given his own excuse note by the legendarily foul mouthed Paul Dacre, written up for him by Andrew Pierce, who as we all know is gay, because he bangs on incessantly about it and posed for his masthead photo wearing a pink shirt. 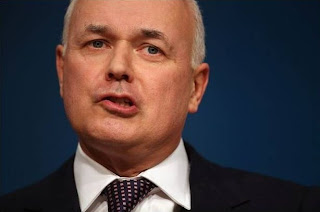 That's a nasty Cough you've got there

Pierce’s value to the Daily Mail is twofold: he writes impeccably right-wing drivel, as demanded by the Vagina Monologue, and his being employed there allows the likes of Littlejohn and Letts to get away with the not so occasional exhibition of rank homophobia. When they are called out, Pierce is wheeled out and asserts that, as a gay man, he would not work for a paper than allowed such things.

So he’s a blatant liar as well: this, too, serves him well at the Mail, and is demonstrated more than amply with today’s piece: “My days on the breadline, a disgraceful BBC and the wife whose love sustains me: Iain Duncan Smith hits back at the left”. This ticks several Mail boxes at once: family life, Beeb bashing, alleged humility and hard work, and the assertion that anyone dissenting is “the left”.

Duncan Cough, Pierce tells, lived after leaving the Army in his future wife’s bedsit, but should not have been there as he was not paying rent. Strangely, whenever I’ve had to keep a crash pad, whether in Bristol (twice) or Amsterdam, I’ve rented the place full stop. Not conditionally on only one person living there. With a pay meter for power, what the heck’s the problem with him living there? That sounds false.

He also concedes that he did not claim Unemployment Benefit after he left the Army in 1981. This was because his bounty payment meant he had too much in savings to allow him to qualify. So he was nowhere near the breadline. He then wrote lots of letters in order to get himself back into work. So have the rest of us. Then he lost his job again. But by this time he had married into money.

The assertion that he was having trouble making ends meet in 1990 does not sit well with the Daily Mail’s own earlier assertion that Duncan Cough’s Chingford constituency home was bought for around £300,000 two years later and that no mortgage was involved. Or, for that matter, that the money they made from selling the flat in Fulham was in the region of £600k. Not your everyday loose change.

Pierce’s excuse note is truly lame. Even the Beeb bashing looks clumsy and contrived, as does the bizarre attempt to swipe at Mil The Elder precipitating a by-election (“expensive and unnecessary”, but not applicable to female Tory MPs going to live in New York) in South Shields. What the hell does that have to do with the Bedroom Tax? And we mustn’t attack IDS because his wife has had cancer.

Not even Mail Online’s commenters are buying this tripe. But there’ll be more later.
Posted by Tim Fenton at 18:04

"This was because his bounty payment meant he had too much in savings to allow him to qualify."

Presumably cohabiting with someone in work would have knocked that on the head too?

"And we mustn’t attack IDS because his wife has had cancer."

That was the low point for me too. How utterly contemptible to use a sick wife as some sort of human shield. Goes to show you don't need to be on benefits to lose self-respect..

Is that why he conned thousands of pounds of expenses for her, as a sort of sickness benefit?