Teenagers, eh? What do they know? This kind of pose is being struck by more and more of the punditerati right now. Any apparent indiscretion, anything off-colour, any brash or politically incorrect comment, all are leapt on as examples of where the youth of the world is going wrong. And when they have money – well, that only makes it worse. 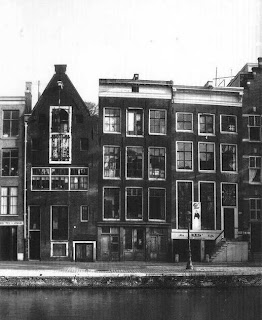 So when Canadian Popster Justin Bieber found himself with an hour to spare while in Amsterdam, and decided to visit the Anne Frank House, later writing a comment in the guest book suggesting that nowadays she “would have been a Belieber”, all hell broke loose. What the heck did he know? It was a head on desk moment! Where was his respect?

Let’s just pause for a moment. Because most of us know the story of Anne Frank, who hid, along with her family, in the house on the east side of the Prinsengracht for much of the Nazi occupation, only to be betrayed and taken to Auschwitz, and then to Bergen-Belsen, where she died at the age of just 15, we assume everyone else does. We assume wrong. And we have assumed wrong for several years now.

When I was, for a short while, a resident of Amsterdam’s Jordaan district – some years ago – I would occasionally take a walk around its streets, discovering the nooks and crannies behind the major thoroughfares. The Anne Frank House was about ten minutes’ stroll along the Prinsengracht. There was usually a queue waiting to go in. But what caught the eye was those just leaving.

Very few smiled. Most hung their heads. Young adults, and especially teenagers, could often be seen sobbing into their hankies. Anne Frank, by keeping a diary, could be shown as a real person, a teenager with the same hopes and dreams as those visitors. And then she was taken from the family’s hiding place, thrown into a cattle truck, and transported east to a death camp. Because she was Jewish.

Those young people who I saw probably didn’t know the story of Anne Frank before they went in. So it’s fair to assume that many more who didn’t know the story never queued up and took the tour. They will now. By visiting the house and sparking all that publicity, Justin Bieber has already provoked millions of teenagers across the world into Googling “Anne Frank”.

And the teenagers who find out about Anne Frank will also find out about the depths to which some have sunk in the past. That, hopefully, will steel them against going there ever again. For that, instead of ridiculing Justin Bieber, everyone should thank him for making sure that another generation does not forget what happened to Anne Frank – and millions more like her.

Might be hard work finding hotel accommodation in Amsterdam this summer, mind.
Posted by Tim Fenton at 16:48

Can any one of us truly imagine what it's like having no privacy in your formative years, then being as stupid as every other hormonal teenager on the planet in the full glare of the world's press? It's like the wankers of the press want to drive the poor kid to suicide.

Besides, the main thing I took from reading about Anne Frank is that she was just an ordinary kid, not a saint, with the same wants, hopes and aspirations as any other young girl.

So yes, she might well have been a 'Belieber', given the chance - perhaps Justin got the point rather better than certain jounalists.